Friends of the Library programs resume with fall film series

The conclusion of summer signals the return of Friends of the Library (FOTL) events. FOTL is a volunteer auxiliary support group for the Boyle County Public Library. They offer numerous high quality programs and events for the public throughout the year. This year the FOTL fall schedule includes speakers, author visits, a voter registration 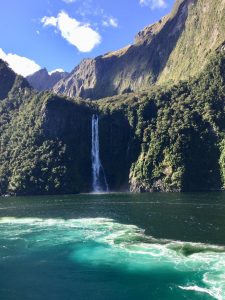 Friends of the Library will also host Travel Talking: Australia and New Zealand, with Gayle Waddell. Waddell will share about her travels and showcase a photo exhibit. (Photo contributed)

drive, a book sale, and a film series.

The Fall Film Series kicks off 7 p.m. on Thursday, Sept. 5  in the Community Room at the library. This film series will feature award-winning actors in classic screwball comedies from Hollywood’s Golden Age. The films will be introduced each evening by Stan Campbell. There is no charge for admission, and free popcorn and refreshments will be available. The film series will run on Thursday evenings through Oct. 10.

Due to licensing restrictions, the use of the film titles is prohibited here. However, the descriptions of the films are listed, and inquiring minds can find out what movies will be shown by either visiting the library’s website www.BoylePubLib.org or by calling the library.

In addition to the film series, FOTL will also begin their monthly program series. This month the Friends will host Travel Talking: Australia and New Zealand with Gayle Waddell, who will share about her travels to Australia and New Zealand, and showcase a photo exhibit from her “Reading Around the World” collection. The program will be held 4 p.m. Sept. 24  Community Room.

A complete listing of upcoming FOTL events and information about the group is available on the library’s website. All FOTL programs are free and open for anyone to attend. An interpreter for the deaf is available upon request by contacting the Library 48-hours in advance at (859) 238-7323.

Movies will be offered Thursdays through Oct. 10. For more information, visit boylepublib.org.

Sept. 5— In this 1937 film, a soon-to-be-divorced duo set out to scuttle each other’s prospective marriages in typical screwball fashion.

Sept. 12— This film from 1937 tells the story of a small town factory girl who discovers that she isn’t really dying, but with the aid of an unscrupulous big city reporter she decides to exploit her newfound fame for all its worth.

Sept. 19— In this 1941 film, two con artists set out to fleece a not-very-bright (but very rich) young man who is more interested in snakes than romance.  He doesn’t know what hit him. Twice.

Sept. 26 — In this screwball comedy from 1942, a married couple is down on their luck financially. The wife runs away from the man she loves to save their marriage only to run into The Ale & Quail Club, an eccentric millionaire, and his mad sister.  True love will probably find a way to prevail.

Oct. 3— In this 1943 comedy, a small town girl wakes up married and pregnant after a going-away party for GIs but can’t remember the groom’s name.

Oct. 10 — In this 1972 romantic screwball comedy, four identical pieces of red plaid luggage are mixed up in a San Francisco hotel creating chaos for their owners: a nerdy academic and his controlling fiancée, a mysterious man, a rich woman and a college drop-out who is a force of nature who disrupts (and more or less destroys) everything in her path.