‘Getting Ahead’ investigations show community’s strengths and weaknesses 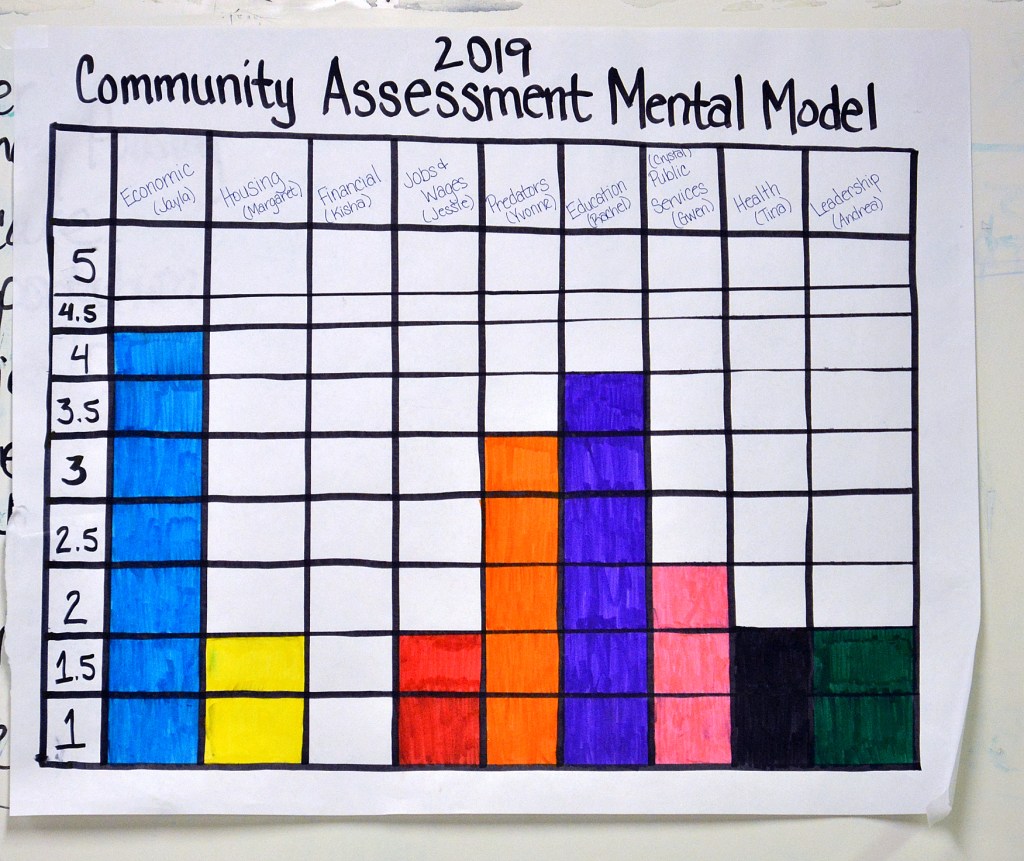 The community assessment model that the Getting Ahead group researched shows that Boyle County and Danville are most lacking in housing, jobs and health. (Photo by Robin Hart)

A “non-scientific” community assessment by a small group of people living in or near poverty levels shows that Danville ranks lowest in housing and job opportunities, leadership conditions and health issues. Their survey gave the highest score to the community’s economic conditions.

The most recent graduating class of the “Getting Ahead in a Just Gettin’ By World” program, sponsored by the Heart of Kentucky United Way for public housing residents, conducted the survey.

Crystal McPherson, CEO and Director of the Family Services Association of Boyle County and mental health counselor at Centre College co-facilitated the program with Gwen Campbell, Resident Services Coordinator for the Housing Authority of Danville.

“The United Way’s initiative ‘Bridges Out of Poverty’ … is a conversation of community members about poverty issues,” McPherson said. “Our side, ‘Getting Ahead’ we work with the people who are near or are in poverty and we give them the tools to have the conversation with people who are having the Bridges conversations. Hence the term ‘bridges.’ We want to be able to create this type of language so that they can have conversations to solve some of our problems.”

McPherson said the Getting Ahead group went out into the community and investigated poverty issues and how it affects themselves and this community.

Each participant was assigned to investigate one of the nine areas suggested by their “Getting Ahead” workbook — economic, housing financial, jobs and wages, predatory lending, education, public services, health and leadership.

Once the investigation was complete, the group discussed all of their findings. “We even discussed if we agree with what everybody else had said, because, let’s face it, we are the people that are being affected by all of these things.” 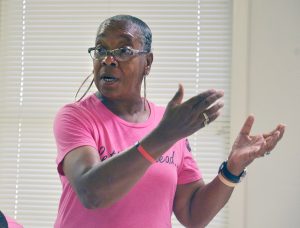 “I think that we were all shocked at some of the things that we learned,” Campbell said.

Through interviews with local leaders and officials and online statistical research, the group formed an impression of “some of the biggest needs that we thought could be addressed in Boyle County,” Campbell said.

However, “We did not go in here like scientists,” McPherson said. “… this was not a scientific study and only reflects our impression about the state of our community from our investigation.”

Each of the nine areas of investigation had 10 statements that were answered by “True”, “False” or “?” which indicated “don’t know.”

Once their research was complete, the participants gathered at the Batewood Homes Community Center, discussed their findings and created a bar chart which illustrated what they thought were the community’s strengths and weaknesses. Each area was scored on a 5-point scale. Here are their findings:

• Economic conditions, investigated by Jayla Pennycuff, scored 4  — Pennycuff found that the percentage of people living in poverty nationwide was going down. Free and reduced lunch rates in all schools were also declining. The number of and value of business loans in low income areas is growing and the number of people employed by locally-owned businesses was also increasing. Pennycuff said, “Poverty is going down in Boyle County,” and there are job opportunities. Jody Lassiter, director of the Danville-Boyle County Economic Development Partnership spoke the group one night and told them that our business community is “having a hard time filling jobs,” Pennycuff said. There are jobs available but the drug epidemic is preventing people from being able to fill those positions, she said.

Also, income disparity was increasing and the downtown vacancy rate was also going up.

• Housing conditions, investigated by Margaret Singleton, scored 1.5 — Singleton said based on answers given by a local Housing Authority manager she found that rental units for low income renters were more available than in previous years and more households were able to afford to live in a median single family house. Also, the waiting time for subsidized housing is about two weeks, now, she said. However, she also found that the use of number of homeless people was not declining; people “doubling up” and living together was on the increase; inadequate or overcrowded housing conditions were not being reduced; and segregated housing by economic class wasn’t going down either.

• Financial and banking conditions, investigated by Gwen Campbell and Kisha Conder based on figures from the 2018 Getting Ahead program, scored 3 — “There are a lot of positive things happening in our community,” Campbell said. On the rise are bank loans for small business start-ups. “Small business is in” Campbell added. Also, micro loans are more available to low-income people and more money is being spent in the local economy. And more banks are providing typical and fair financial services to low-wage workers and more financial literacy classes are available to people living in poverty or near poverty.

• Jobs, wages and wealth-creating conditions, investigated by Jessie Naylor, scored 1.5 and was presented by McPherson — Between 2016 and 2017, the median household income increased only $9. Also, from 2015 to 2016 employment in Boyle County grew at a rate of 1.42%. Naylor also found that the hours of labor required to meet basic needs is on the rise. Employee-owned businesses are on the rise, “but not in Danville,” McPherson said. Their investigation showed that employers are not using fewer temporary and part-time employees; affordable and available high-quality child care is not increasing; transportation to work and services is not becoming more reliable and affordable; and there is no community living wage ordinance. “We just follow minimum wage” requirements, Naylor wrote.

When Lassiter talked to the group about some of the job creating things they’re working on and listened to the group’s ideas, “What rang clear to me was there are jobs available,” McPherson said. However more training opportunities need to be in place. 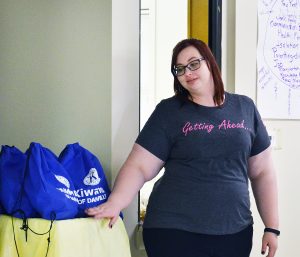 Jayla Pennycuff talks about the bags that the Getting Ahead group filled with personal hygiene items which will be donated to Family Services for them to give to teens when they are taken into emergency foster care. (Photo by Robin Hart)

• Protection from predator (businesses) conditions, investigated by Yvonne Harvey, scored 3  — Harvey found that the number of payday lenders, cash-advance shops and check cashing outlets are going down. Also, there are four “checking advance places” in town. “I learned that they won’t allow them to have more. … Four is it,” Harvey said. “One place told me I couldn’t ask questions unless I do business with them. So I said ‘Thank you, God bless,’ and I went out the door.”

Harvey wrote in her report that alternatives are being developed for buy-here/pay-here car dealerships. The number of employers who ask their employees to work “off the clock” without pay are declining and worker’s compensation violations are going down. Harvey wrote that programs like Goodwill Industry’s ‘Cars to Work’ is answering the need for alternative, affordable transportation.

• Education conditions, investigated by Rachel Virgil, scored 3.5  — Virgil said, “What I really found was that preschool and early head start, there is more of a need in that area. There seemed to be a lot more children in need than there are available spots for them.”

She wrote, “Child care and preschool opportunities have declined for families in Boyle County.” And the cost of a college education is rising. On a better note, the graduation rate of high school students is on the rise; as is the graduation number of first generation, low-income college students. Also, apprenticeship and certificate programs that lead to well-paying jobs are increasing and “worker skills are increasingly meeting the demands of the employers.”

She also said the expanding programs at BCTC and its partnerships with local manufacturing plants, “is really a great benefit for our community,” she said.

• Public sector conditions, investigated by Crystal McPherson, scored 2 — According to interviews with a social worker, public official and a public health employee, McPherson found that in their opinions the local tax base for maintaining high-quality police and fire services, as well as for public transportation, water, sewer, garbage collection and street cleaning is not secure. “There are some needs for us to be able to increase our tax base. Being able to generate more income to support our community, is mainly the thing that jumped out at me,” McPherson said.

Public transportation is not adequate to take people to and from work, school, healthcare facilities and grocery stores. Governmental service employees do not treat everyone in a respectful and timely manner.

“There’s a lack of trust in government,” McPherson said. “It’s sad and it’s hard to hear but it’s true.”

• Health conditions, investigated by Tina O’Neal, scored 1.5 — In her overview, O’Neal wrote “The number of uninsured community members is declining, but the cost of deductibles is still a strain on families’ budgets. The community is responding to addiction problems and other mental health issues, but we still have things to work on.”  She also found that high-quality food is not accessible and affordable for everyone in the community; environmental safety is not improving for everyone; transportation and easy access to health care is not improving and neighborhood crime rates are not declining.

• Leadership conditions, investigated by Andre Lewis, scored 1.5 — Lewis found that the leadership throughout the community does not ensure that people from all classes and races are involved in planning, program design and evaluation of major initiatives; and isn’t increasingly representative of the population “in terms of race, ethnicity and class,” she wrote.

Rachel Virgil describes what she found out while investigating education conditions of Boyle County. (Photo by Robin Hart)

“What was really encouraging from talking with the individuals that I did, is that people are very respectful of each other in leadership … but it’s not very representative of our population. But the desire is there, and that was very encouraging to me.”