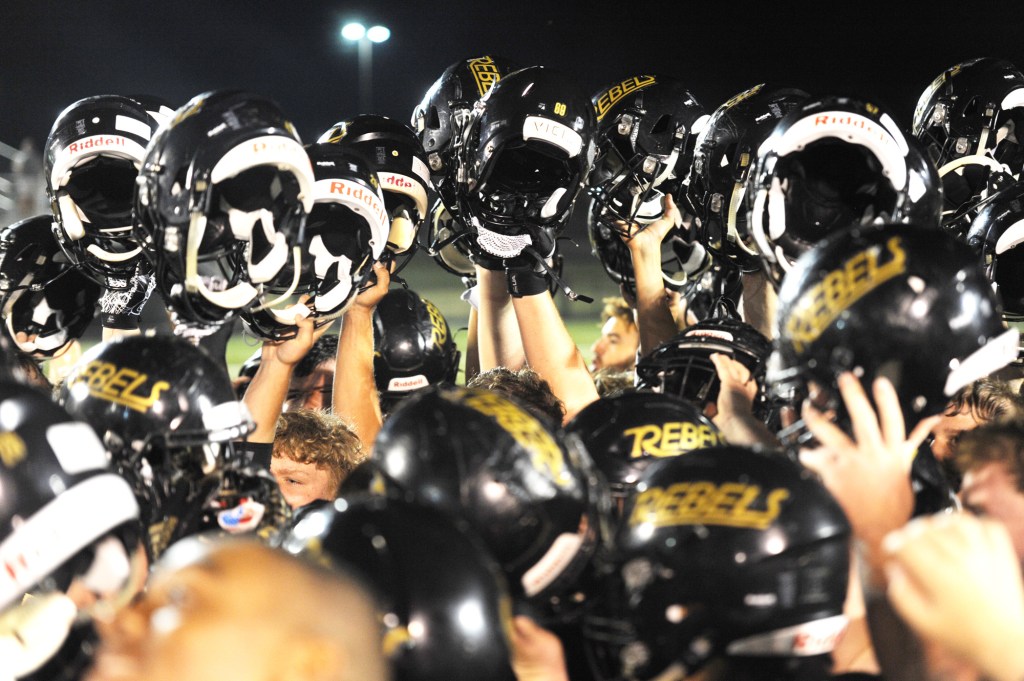 For the second week in a row, Boyle County was able to rest its starters and had a running clock in its 56-7 victory over Bullitt Central (1-1) in Saturday’s nightcap of the McDaniel Wealth Management Rebel Bowl to decisively improve to 2-0.

“They’ve done a good job a mentally getting themselves ready to play. They’ve done an outstanding job of approaching the game and getting after it right away,” Boyle coach Chuck Smith said. “Attack fast and playing fast. Ready to go. I’ve been really pleased with that.”

Just like last week’s win over Iroquois, the Rebels scored on their first offensive play when Reese Smith hauled in his second reception of the season, and took it 50 yards for his second touchdown of the year. On Bullitt Central’s ensuing drive, Smith caught the second pass thrown of the game for an interception. 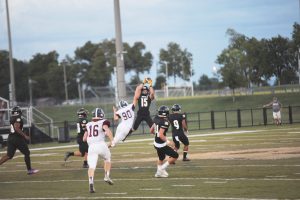 Reese Smith recorded his first INT of the year on the first pass the Cougars threw Saturday. (Photo Derek Brightwell)

It didn’t take long for Boyle to get back to the end zone as Landen Bartleson took his second carry of the year to the house for his second touchdown of the year.

“They say speed kills and once I get on the edge, I just go,” Bartleson said. “Honestly, I don’t really worry about anybody, I don’t look around. I just go.”

The Boyle defense was swarming the Cougars all game. Hayden Bottoms recorded two sacks in the next Bullitt Central drive, one to force fourth down and — after a miscue on the punt allowed Bullitt to get the ball back — another to force 3rd and 24.

Boyle’s next drive ended abruptly when Reed Lanter’s pass went through Reese Smith’s hands and into the arms of Timothy Heilman who returned it for the Cougars only score of the game.

After Grayson Rahbany’s return put the Rebels on their own side of the field, a punishing drive highlighted by Will McDaniel’s rushing ended with Bartleson’s second TD of the game in the form of a 2-yard TD run.

“We kind of got into a little bit of a lull right there and kind of relaxed. Great teams never relax. We fell asleep right there. We let them have a pick six,” Smith said of the two drive series. “The guys — they did respond to that adversity. They came back out the next series and took control of the game.”

Reiley Colwick was the next to get in on the scoring as Lanter connected with him for a 45 yarder to firmly put Boyle in charge of the game. Reese Smith caught his third TD of the year with an 18-yarder on the next Boyle drive.

Bartleson capped things off with two TDs in the next two drives — a 1-yard score and a 50-yarder up the gut — to conclude the night for the starters. 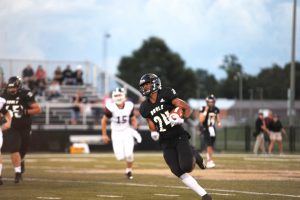 With the running clock going throughout the entire second half, Boyle only managed one more score, which was scored by junior running back Cas Phillips.

Boyle County has looked near unstoppable in its first two games, which is something Bartleson attributes to the offseason workouts.

“It started back in January… Every day we pushed ourselves to come out — I know I pushed myself to come out to practice like I am in the game,” he said. “That way, when we are in a game, we’ve got our timing down and all that. It’s just a routine.”

Next week, however, the Rebels will square off against cross-town rival Danville (1-1) at 7:30 p.m. in a game where anything can happen.

“Everybody will be excited about it. It’s a great game, a great atmosphere. It’s one of the best rivalries in the state of Kentucky,” Chuck Smith said. “You can really throw out the records and the two weeks of performances. Everybody plays at a different level and that’s the way it should be played.”