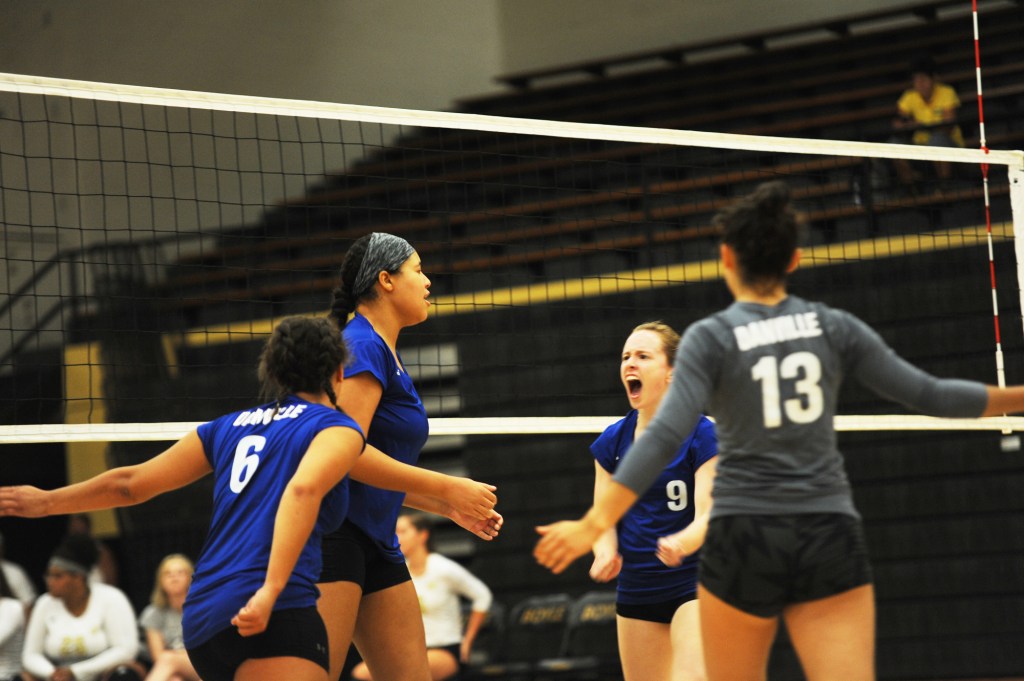 “It’s important and special because this group of athletes — the majority of them were eighth graders when I took over,” she said. “It’s these types of high pressure wins that demonstrate to everybody that it’s all been worth it. All of the girls that put in hours of work in the gym every week. It all becomes worth it in moments like these.”

After the final point was scored, the team rushed the court, followed by the student section for a jubilous celebration.

“That was exhausting, but worth every ounce of energy,” Myers said of the celebration.

Following the pattern that the Admirals have set this year, the Rebels took the first set 25-14. The turning points of that series were a five point rally during Hannah Sizemore’s turn serving and a six point run to close the set out in front of Kaylee Whitsell’s serves.

“It is a pattern. We have yet to find what it is going to take for us to come out of warmups really ready to play,” Myers said of Danville’s tendency to split the first two sets. “Every huddle is the same thing. It’s we have to control the ball on our side of the court and stop making unforced errors. Because that’s when I believe when the team on our side is pretty unbeatable. We can dig with some of the best. We can pass, serve — we have every skill necessary to be a championship level volleyball team.” 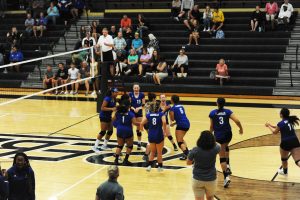 After that, the Admirals took control of the match. In the second set, senior libero Olga Betonni pulled off four consecutive service aces that swung the tide in Danville’s favor not just for the set — which Danville won 25-14 — but for the match as well.

“I talk a lot with my team about momentum. I mentioned before that volleyball is such a mental sport, such an emotional sport,” Myers said. “When you have the momentum on your side, it’s almost like you have a seventh man on the court. To get that going with Olga’s series of service aces I think was exactly what we needed. I think we sustained it throughout the rest of the four sets. 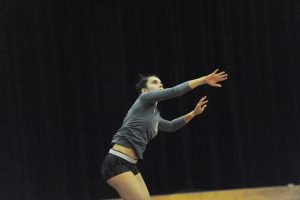 Olga Betonni had four straight aces in the second set to propel the Admirals to victory. (Photo Derek Brightwell)

“There were times when we would start to see a slight momentum shift but were able to regain control,” she added. Maybe make a slight adjustment after a time out or just something to force Boyle County to rethink how they want to attack us, how they want to serve at us.”

As the match went more and more in Danville’s favor, the students who made the trip to the first contest of Rivalry Week started to get louder and louder. Every serve was met with a “Boom” from the Admiral faithful. Every point was met with a song.

“When our fellow Admirals show up — we saw administrators in the building, we saw teachers in the building, we saw peers and other students in the building. Those things are a level of support that I think everybody knows is there but to physically see it adds a level of enthusiasm,” Myers said of the fan support. “It adds some energy even when we’re tired and four sets in or those long volleys. When the student section cheers us on — it’s almost like if they can maintain that level of energy then we ought to be able to as well. I think it gave us the push that we needed tonight.” 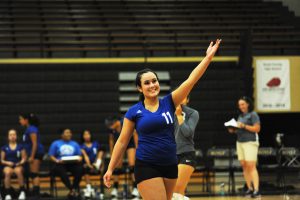 The final two sets were a grind. In the third set, the Rebels battled back from down seven to pull within four when Danville needed one more point to win. The Rebels battled for that last point before finally falling 25-22 on the set.

In the final set, it looked like Danville was going to run away with it, up 21-14 at one point. But Boyle once again closed the gap, but couldn’t quite get out of the hole and lost the set, and the match 25-21.

“It could have been more of a battle,” Boyle coach Andrea Craig said after the match. “Obviously they persevered through a lot of those sets really well. But we just weren’t able to dig ourselves out of a hole quick enough for it to matter.”

The win gives the Admirals the advantage and momentum at the start of the week. Thursday will see a double header between the boys and girls soccer teams and the week culminates in Friday night’s football game. Myers hopes that the win Tuesday will generate an even higher level of excitement.

Myers also hopes to see the Rebels two more times — once more in the regular season at Danville and again in the district tournament.

“I hope that as Boyle continues to work and improve that we are able to match that with our own efforts and just relentless pursuit of a district title.”