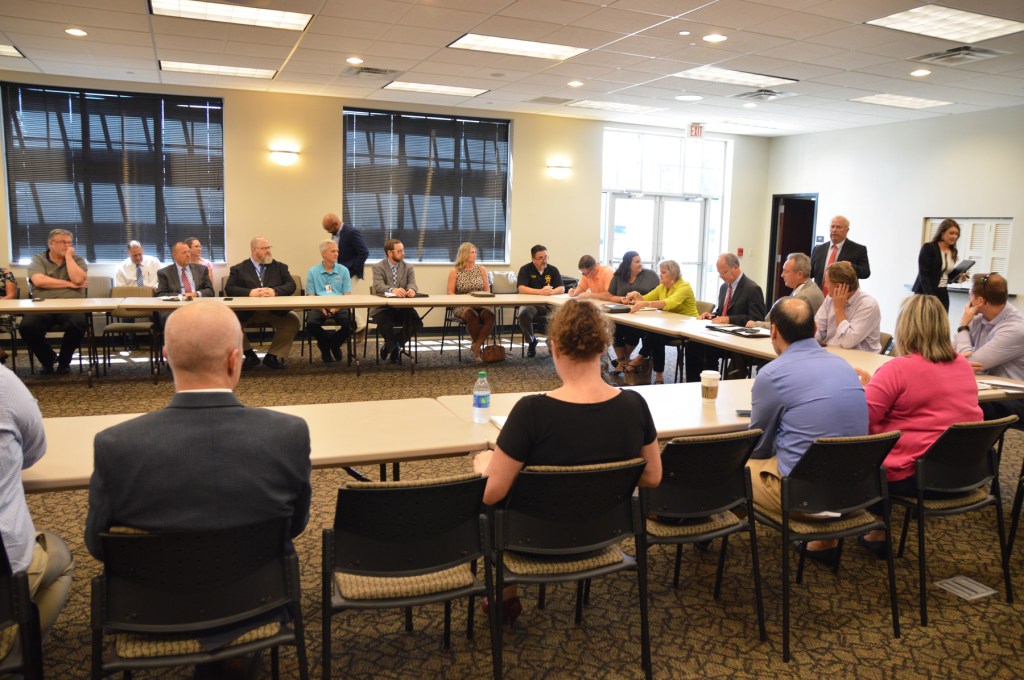 The roundtable was the second such event held in Danville by the Republican congressman; it was attended by multiple care providers and local, state and federal officials.

“People are really working together …This is a bi-partisan thing,” Guthrie said.

Currently, he said he’s on a subcommittee and “particularly, we’re working on imported fentanyl … coming from China.”

He said in working with the Senate, “There’s been no bigger ally on fighting this then Sen. (Mitch) McConnell, and a lot of things happen because we have the top senator.”

The roundtable mostly centered on discussion about the $87 million grant the University of Kentucky was recently awarded for studying opioid addiction issues. Researchers hope the study will result in a 40% reduction of opioid-related overdoses over the next three years, through evidence- and community-based implementations.

The roundtable was a follow-up from one held in Danville last October, when Guthrie explained his Comprehensive Opioid Recovery Centers Act.

Guthrie assured the group that “everything going on in D.C. — I can tell you, it’s a lockstep effort by Republicans, Democrats, the House, Senate, the president, to say, ‘How do we get more resources to you guys who are fighting the battle?’”

“We’ve taken a grant from the Pfizer Foundation,” said Executive Director for the Kentucky Office of Drug Policy Van Ingram. “Trust me, it was not easy to talk me into taking money from a drug manufacturer, but it’s their foundation …”

Ingram said the grant was used to put a media campaign together, which recently began running in television and radio spots, as well as on advertisements in malls and on billboards.

The campaign attmpets to “spread the message to those suffering with a substance abuse disorder — there is help and we can find you hope,” he said.

Ingram said, “We are excited about this campaign. It’s bringing more attention to this issue, and steering people towards the right resources.”

He said there is some good news on the drug front — Kentucky has experienced a 15% decrease in overdose deaths.

It “certainly doesn’t mean our work is done, but it means we’re heading in the right direction. That was 233 families that didn’t have to go through the loss of a loved one, and all the tragedy it brings,” Ingram said. “We need to double down, continue our efforts and keep supporting you folks in the field.”

Ingram said Kentucky doctors prescribed 100 million fewer dosage units of opioids in 2018 than in 2012. “So, word is out to prescribers, and our three-day limit Gov. Bevin pushed is starting to bear fruit,” Ingram said, referring to rules limiting some narcotic prescriptions to three-day supplies. “I honestly think we’re going to beat this thing, but you don’t turn the Titanic around on a dime — and we were certainly up against something as mammoth as the Titanic.”

Training has also been focused on for health-care providers. Ingram said work continues through UK Healthcare CE Central, with continuing education provided for health-care professionals on evidence-based practices, delivering training across the state.

Ingram said now there is centralized naloxone distribution. “For a while, I was taking state money and purchasing it for law enforcement, Behavioral Health was taking funds and purchasing it, Public Health .. And we really weren’t coordinating well.”

He said now, everything goes through the Kentucky Pharmacists Association, “so we’ve got a much better handle for the future on where it’s going and how it’s being used.”

Syringe exchange services are continuing to expand around the state, Ingram said. Kentucky is now up to 63 approved locations, and he thinks there will be more than that before the end of the year.

“Ten years ago, I thought it was crazy,” Ingram said, until he was approached about it and shown research. He then began researching communities with exchanges, and found that accidental sticks to first responders go down 65% in cities with them.

“People who participate in syringe programs are five times as likely to go into treatment than those who are not participating. The health outcomes — HIV drops …” and the spread of hepatitis drops, also, he said.

However, Ingram said the “bridge clinics” are not going as well as they’d hoped, but they are continuing to work on them. “So many times, people come into the ER, they’ve just been (given an opioid overdose antidote), their brain is screaming for them to use, it’s hard to get their attention and keep them there very long.” He said in reviewing the bridge clinic process — which allows for someone who is being treated for an issue relating to opioid use disorder to also be treated for their addiction — “The ER may not be the best place to do that, is what we’ve learned.”

Ingram said the Treatment Stipend Program, which is supported by federal dollars, is now available in residential programs that accept Medicaid. “We don’t want nonpayment to be a reason someone walks out of a residential program,” he said, and his agency can pay for that treatment until someone can get set up on Medicaid.

“Managed care may say 28 days, but you think they need to stay longer than that … we’ll pay for the room and board while you bill for outpatient services and case management … That model has worked.”

He said the methadone stipend program will be going away, now that Medicaid pays for it. However, several quick response teams are being funded around the state, allowing for visits within 24-48 hours to someone who has suffered an overdose in order to talk them into treatment.

“And Casey’s Law education continues around the state,” Ingram said, which provides a means for family, for instance, intervening when a loved one is unable to recognize the need for treatment due to their impairment, by petitioning the court. “We know that coerced treatment can work — maybe not in all situations, but it has been shown to work.”

Ingram said a program called Restore has been funded by a grant that went to the Administrative Office of the Court to help educate court workers about the disease of addiction. “How when someone relapses, it’s not personal against you and the court, it’s part of the disease process,” Ingram said.

Trainings also continue on the Ed Hazelden Betty Ford model rehab program, which uses evidence-based medical treatment for opioid addiction. Ingram said there is one jail facility in Kentucky set up on the program, with another getting ready to start.

He said federal and state dollars are still paying for SITE — Strategic Initiative for Transformational Employment. “In all of our 14 career development centers, there’s a person whose only job is linking people in recovery with employers who are willing to take a chance.” Ingram said everyone is in place, but the program is just getting started.

Grants have recently been released for transitional housing that is friendly to MAT — medically assisted treatment, and peer support trainings are continuing to multiply around the state, he said.

Ingram said in some research done with probation and parole, they’ve found the biggest barrier for those in recovery to get jobs is transportation — they can’t get to treatment, interviews, the parole office … “Started studying and thinking about it. Part of my work I do is also in Medicaid, and I knew they had contracts with transportation providers in every county in Kentucky.” Ingram met with the Department of Transportation, he said, which holds the contract.

“We will put it in four different offices to see if we can remove that barrier,” he said. “The last three or four years, that’s all we’ve been trying to do, is remove barriers to success.”

Due to a Medicaid waiver, “the waiver allowed us to go from a 16-bed capacity limit to now 96 cap,” Ingram said. He used the example of Isaiah House, whose intake people told Ingram if those need help call before 11 a.m., they can usually get them in the treatment before 5 p.m.

“Folks, that’s amazing. We used to have six-week waiting lists,” he said. “Now when a person wakes up and says I can’t live like this anymore, and they all do — every one of them have moments of epiphanies … before the addicted brain tells them they can live like this, we gotta have those services available to them today. That’s what the Hope and Health campaign is all about.”

Ingram said he was approached by the Kentucky Chamber of Commerce who wanted funding to start a program to encourage and educate employers about hiring those who have been in recovery programs. “I was reluctant at first, but agreed to grant them some money if they can match it.”

Ingram said the Chamber was granted $350,000, which it matched with money from the private sector. “And they’ve hired folks that are going out to the Chambers, doing trainings all around the state, helping employers recognize who they can hire.” He said the response from the business community has been huge.

“I think I heard there are 200,000 unfilled jobs in Kentucky, and we have people in recovery, and people with felonies on their record who can fill those jobs. I think the business community has come to recognize they need to change their ways.”

After the roundtable, Ingram was asked about the current lawsuits against pharmaceutical companies; if state agencies like his, which are spending massive amounts in the opioid crisis, would see any of those dollars.

“There is some talk of something similar to something like the master tobacco agreement, where each manufacturer pays so much over a number of years, divided into a formula,” Ingram said. “But as of today, that’s all just talk. The Attorney General has filed a number of lawsuits — how and when those will be decided and all those questions are just unknown.”

Ingram said even though the funding for most of the programs comes from a bill focused on opioids, “We’ve interpreted our use of federal funds to mean if there’s a secondary diagnosis of opioid use disorder, and methamphetamines are the drug of choice, it’s appropriate. We go ahead and treat it as well.”