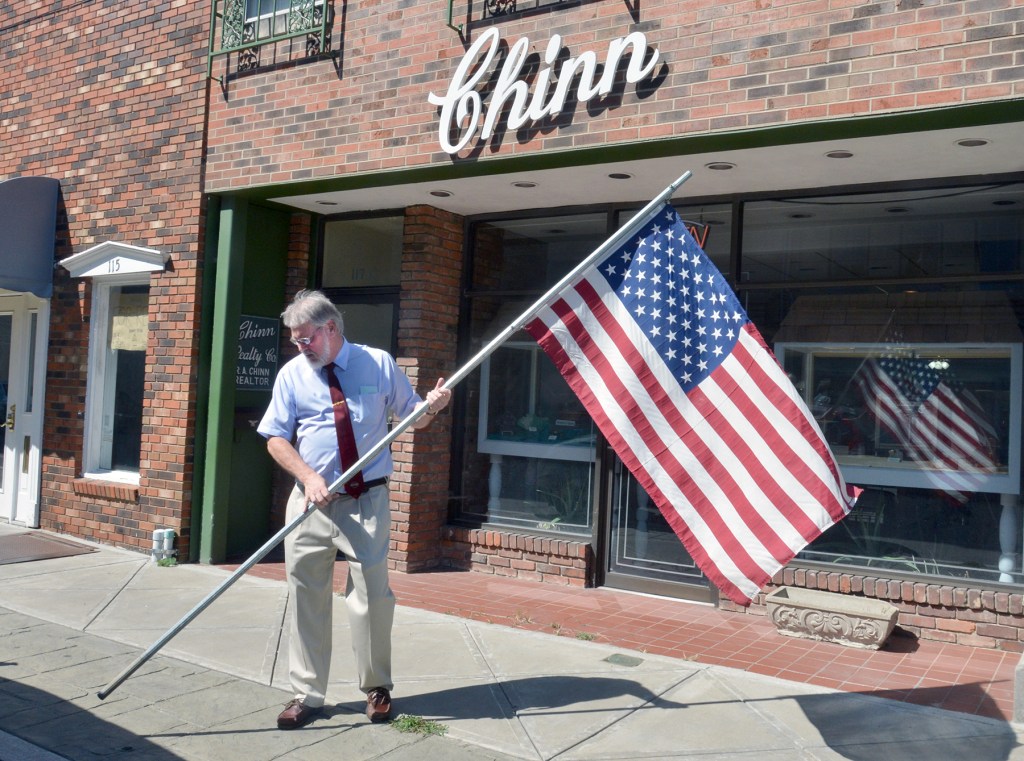 Every morning, Kevin Chinn sets out an American flag, a tradition his late father, Art Chinn, did every day. (Photo by Robint Hart)

Chinn’s Jewelry has been in business since Art and Martha Chinn opened for business in 1948, just two doors down from its current location on Third Street. Their son Kevil grew up in the diamond and gemstone business and as a teenager, he even helped construct the building where he still sells sapphire and diamond rings, diamond stud earrings and strands of pearls. 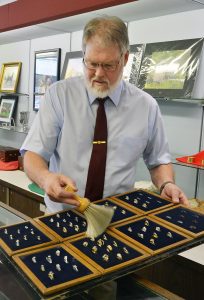 Trays of gold and silver rings are dusted off every morning before Kevil Chinn puts them in display cases. Every night at closing time, he takes the trays out of the cases and locks them in a safe.(Photo by Robint Hart)

Every morning, Kevil places an American flag on a pole outside the front door. A tradition his father started after he returned from World War II, he said.

Then he goes to a large safe and pulls out tattered cardboard boxes stacked with the most expensive pieces of sparkling earrings, necklaces and bracelets and places them in the display cases. Trays of gold and silver rings are dusted off with a soft brush before he places them in the glass cases too.

Between an almost steady flow of customers who were dropping off a ring to be appraised; a band that needed to be repaired; a ring resized; lots of watches that needed new batteries and julep cups that needed to be engraved. “You don’t know what’s going to come through the front door,” Kevil said.

He enjoys talking to his customers, and it seems he knows just about all of them by name. “I like dealing with the people.”

“The fun part is making that special piece for someone,” Kevil said. People often come in with loose stones or gemstones in old rings they want to have reset in some special way. He can take someone’s ideas of what they want and use their stones to create exactly what they envisioned. “What it boils down to is assembling, setting the stones and making it come to life. Each piece is unique,” Kevil said.

As a child, Kevil said he sometimes traveled to Cincinnati with his dad on jewelry business. “Cincinnati was the hub of the jewelry business,” Kevil said. When he was older he made the trip by himself and took pieces that needed repairs that they weren’t able to make. One of his favorite places to visit was where the Shire brothers worked. They taught him a lot about the “four C’s” of diamonds — cut, color, clarity and carat weight. They also taught him how to set diamonds.

In the few minutes between a customer’s phone call and someone walking into the store, Kevil recalled one day he spent with the Shire brothers. “I went into their inner sanctum. There was this big desk piled with diamonds” that one of the brothers was grading.

He asked Kevil if he wanted to set one of the larger gems, which he did, but “I broke the stone.” He said he was scared to tell his dad and the brother who was teaching him, but he had to let them know. When he told Mr. Shire what happened, he looked at the stone and said, “Damn if you didn’t” and tossed Kevil another one to try again. “That’s what it was like in those days,” Kevil said.

As a teenager, Kevil washed the storefront window, swept the floor and sidewalk and did minor jewelry repairs.

In the late 1950s and early 60’s the Chinn’s opened a lady’s ready to wear store named “The Fashion Shop,” near their jewelry store on Third Street. Eventually Chinn’s Jewelry moved into the larger clothing store location where it stayed until 1971.

That year the Danville Laundry burned to the ground where the Third Street parking lot is now, Kevil said. So his parents bought a portion of the lot where it was located and built the current store and moved their business in 1972.

Kevil said he well remembers the day he thought he was going to just hang out with his friends, when his dad told him to get up that morning and go to the lot. When he got there there were three huge men and a load of gravel that had to be spread out six inches deep. “I got in on the ground floor of this building,” Kevil said laughing.

When he got out of high school, Kevil said he worked at a gas station, a warehouse, and a farm. While working outside for a civil engineer one winter, Kevil said to himself, “I know where there’s a store that’s warm and dry. I can work for Dad.” 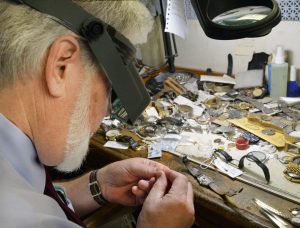 Chinn replaces a broken stem of a watch band. Chinn has been repairing jewelry and watches and creating rings and pendants at his work bench at Chinn’s Jewelry store for many years.(Photo by Robint Hart)

He called and scheduled a “real interview” with his dad later that week. Afterward, his dad told Kevil that he wanted him to follow his dreams so if after a six-month trial period he didn’t want to be in the jewelry business, he was free to leave. “But in the next breath he said if I didn’t meet his standards, ‘I’m going to fire you.'”

“I’ve been here ever since.”

When he started working at the jewelry store, Kevil wasn’t required to wear a sport coat, because he was mostly working at a jewelry bench in the back, Kevil said. However, he had to wear a tie every day. Nearly 50 years later, the tie Kevil wore on Tuesday was a basic, maroon tie with a gold tie clip. If you looked closely, you may have been surprised to see a Harley Davidson emblem at the bottom.

Over the years Kevil has seen many changes at Chinn’s Jewelry. They transitioned out of selling formal wedding china, stemware and silver place settings. Women no longer wear large diamond cocktail rings, and high end watches are solar powered.

Kevil is also an expert at restringing pearls, a skill that he learned from his mother.

“I have lots of loyal customers,” Kevil said. One customer purchased his wife’s engagement ring at Chinn’s; their son purchased his fiance’s ring there, and now the grandson is being urged to do the same.

Kevil said his parents’ “ghosts are still here. When I sit down at the bench I think about him teaching me. Or I remember the tricks of the trade he taught me.”

When asked if he was thinking about retiring anytime soon, Kevil answered, “I have no plans to retire. What would I do? I enjoy the people.”

Mary Jo Coomer talks about a ring she needed Kevil Chinn to take a look at for her.(Photo by Robint Hart)

Kevil Chinn owns and operates Chinn’s Jewelry, which was started by his parents Art and Martha Chinn in 1948.(Photo by Robint Hart)