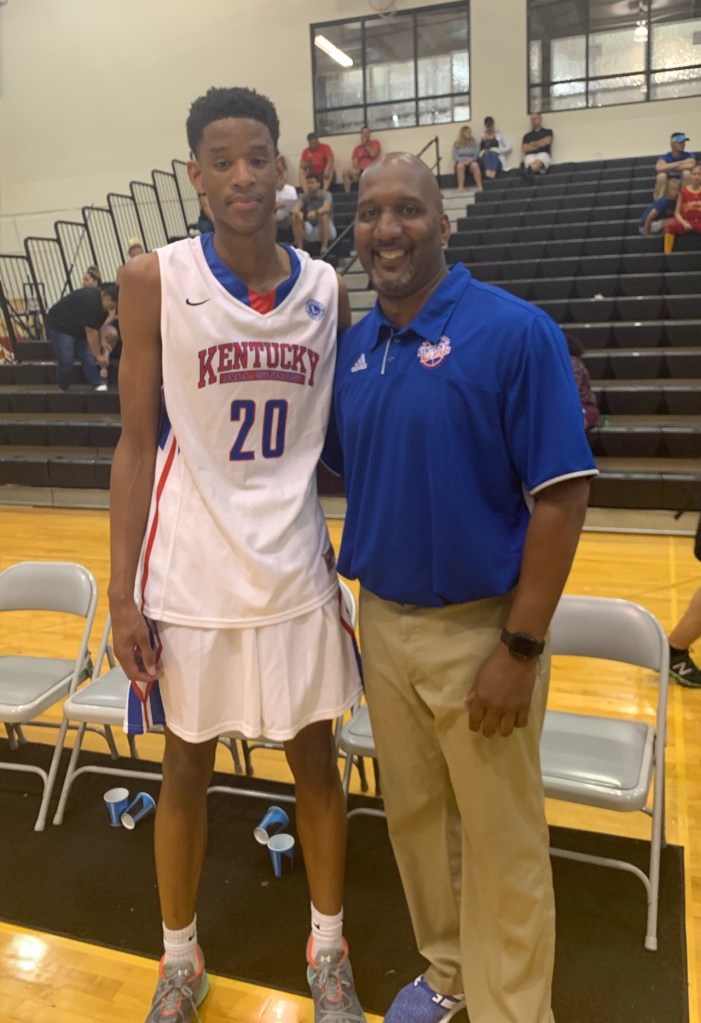 JJ Traynor has gone from a player who averaged 11.2 points and 8.6 rebounds per game for Bardstown, which only had a 15-16 record last year, to a top 100 recruit nationally in a matter of months.

The 6-8 Traynor, the son of 1993 Kentucky Mr. Basketball Jason Osborne, is now the highest-rated in-state player in the 2020 recruiting class and Bardstown coach James “Boo” Brewer, a former Louisville player, says he has changed dramatically as a player in recent months to earn that boost in the national rankings.

“He has put the work in. He has been working on his ball handling, decision making, strength, shooting. He has just gotten a lot better overall and is still improving,” Brewer said. “He has such a great bloodline with his dad and mom. He’s a young player. He’s just now turned 17, but his maturity is going and he is starting to realize his full potential.”

Brewer says Traynor will take an official visit to Cincinnati this week and was scheduled to make an unofficial visit to Louisville. He plans to be at Kentucky for Big Blue Madness on Oct. 11. Brewer said Traynor hopes to make visits to Missouri, Michigan and Maryland. He made his first official to Western Kentucky in May.

“He’s not far enough along to have a favorite,” Brewer said. “We are going to set up some more workouts here. We are just taking it one day at a time. So far he is enjoying the recruiting attention. He’s not a kid to do a lot of bragging or get big-headed.

“He’s very grounded and humble. He knows what he has to do and what needs to be done. He’s enjoying the process and talking to all these coaches. It’s really great not to have to worry about him getting a big ego.”

Brewer said Traynor “leans” on him for help with college recruiters but also has a lot of support from family and his AAU coach — Traynor did not play AAU until this summer —who is a former Big 10 player. Traynor has been in the Bardstown school system from day one and basketball is the only sport he plays.

“He’s competitive and hungry but he also does all the intangibles. He blocks shots, runs the floor and is very, very athletic,” Brewer said.

“If they were standing beside each other, you could not tell the difference in them,” Brewer said. “He is more athletic than his dad and that is saying a lot because his dad was a phenomenal player. He does not pass as well as his dad yet but the dribbling is there. His shot is not quite there but it is coming, too.”

Traynor did skill work with Brewer at 6 a.m. and then would drive to Louisville to do strength work in hopes of adding weight for this season.

“He weighed in today at 178 pounds,” Brewer said last week. “Some places have him listed at 195. I wish he was. The goal is to get him to 185 or 190 before the season starts. He’s gained about eight pounds since school started three weeks ago.”

Brewer is encouraging Traynor not to pick a school that others might want for him. He has told him not to get “overwhelmed” by the process.