Zella May will play for its first public performance Sunday at the Kentucky State BBQ Festival. They are, from left, Tony Sell, Doug Collins, Pat Heist and Darrell Gibson. (Photo submitted)

So two guys meet and start a band … That’s actually the backstory for Pat Heist and Shane Baker, owners of Wilderness Trail Distillery, the grounds where the Kentucky State BBQ Fest is going down this weekend.

The ninth annual barbecue extravaganza is known for its celebrity pitmasters — seven of them have returned year after year — and all the smokey goodness of pork, chicken and beef served throughout the weekend. Now in its third year on the Lebanon Road distillery grounds, there’s an additional focus on bourbon, too. Several seminars — some cost and some are for free — are offered throughout the weekend, with the complete lineup on the festival’s webpage.

And with good food and drinks, there must be music.

On Sunday, the last day of the festival, rock band Zella May will have its debut performance, complete with Heist as its front man.

“In the late 1990s, Shane and I were in a band — that’s how we met,” Heist said. They had a mutual friend who played drums who introduced them. “We started playing here locally as ‘Fulcrum.’ The engineers in the band won out on that name.”

Heist said the band died down after he became a medical microbiology professor at Pikeville College. But then, Heist and Baker began Ferm Solutions, and then Wilderness Trail, and Heist relocated back. “Less than a year ago, I hooked up with some guys and started Zella May,” he said. 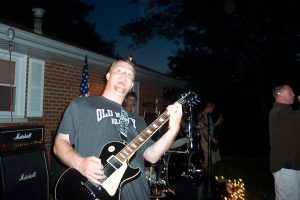 Shane Baker poses on guitar as Pat Heist sings (far right) when they were in the band Fulcrum together.Tim Pike was on bass and Scott Bandura was on drums, at a house party the band played in Burgin. “Richard Jones, who is now our head of sales at Ferm Solutions was at that party and we didn’t even know him back then,” Heist said. (Photo submitted)

“They’re all really good musicians — just all-around good musicians. I’m lucky to be playing with them,” Heist said. This will be Zella May’s first show, after what Heist says has been a “good bit” of practicing.

“This will be our first public performance. This is the only gig I can get, at a festival at a place I co-own,” Heist joked. The band actually already has its eye on a few other venues it hopes to play.

The band will also play “a handful of songs that we wrote in the band Shane and I used to play in. So the originals we’ll be playing are songs written in the late ‘90s,” Heist said. “We tried to get Shane to play in the band, but he’s just a tad bit busy …”

Zella May goes up at 1 p.m. on Sunday. “We’re just really looking forward to it. I think this band really kicks ass. I think a lot of people will be surprised how good we are.” And hopefully, Heist says the band will have support in the show of people “coming from our respective hometowns, and with the weather that’s coming up, I think the BBQ Festival will be a big success.”

Heist said this year is probably the first one the distillery and festival really have their staff in place where it needs to be. “Two years ago, at the festival, I probably poured 50,000 beers myself. This year, I’ll be able to enjoy it more, you know — spend some QT with certain people. Get to visit and enjoy it more.”

The one event Heist said he’s hyped about, besides the debut of Zella May — “I look forward to the Bloody Mary breakfast on Sunday,” he said.

The VIP Bloody Mary brunch, called Marys and Mimosas, goes down 11 a.m.-1 p.m. Sunday in the distillery’s special events room. For $100 per ticket, it includes a brunch buffet and a Bloody Mary bar, and ticket-holders get a bottle of Wilderness Trail Distillery Blue Heron vodka and a bottle of Ubon’s Bloody Mary mix. It also features a class, led by expert Leslie Roark Scott from Ubon’s, on how to make the ultimate Bloody Mary.

“And the whole hog is always really cool …” Heist said about the noon presentation on Saturday, by Mike Mills, Amy Mills and Tim Mikeska. “And man, you just can’t beat the barbecue lineup over the weekend. But there’s a lot of good vendors — people who have some really creative, different things. It’s nice to see all of the variety, with different types of desserts and other types of food, too. People are usually selling spices and all kinds of stuff,” Heist said.

He’s also pretty hyped about the different bourbon seminars that are being offered by Fred Minnick and others of Bourbon+ magazine. “There’s some really good, different talks they’re giving around barbecue and bourbon, and how to pair them up. And Jimmy Rutlege will be here, he’s a legend in the industry,” Heist said about the “iconic master distiller” previously with Four Roses.

“Honestly, what rolls into my mind about this festival? Let’s get’er done …” Heist said. The 2019 Kentucky State BBQ Festival is the first to roll Heist and Baker into their festival season, with several coming up to celebrate bourbon. “This will be the kick-off for us for that. We’re ready.”

The festival is a nonprofit organization. It raises funds for the Heart of Kentucky United Way.

The Kentucky BBQ Festival is Friday-Sunday at Wilderness Trail Distillery. For more information or tickets, visit kybbqfestival.com. Admission is $5/day or $10 for a three-day weekend pass. Kids under 12 get in free.

Music line-up for the festival