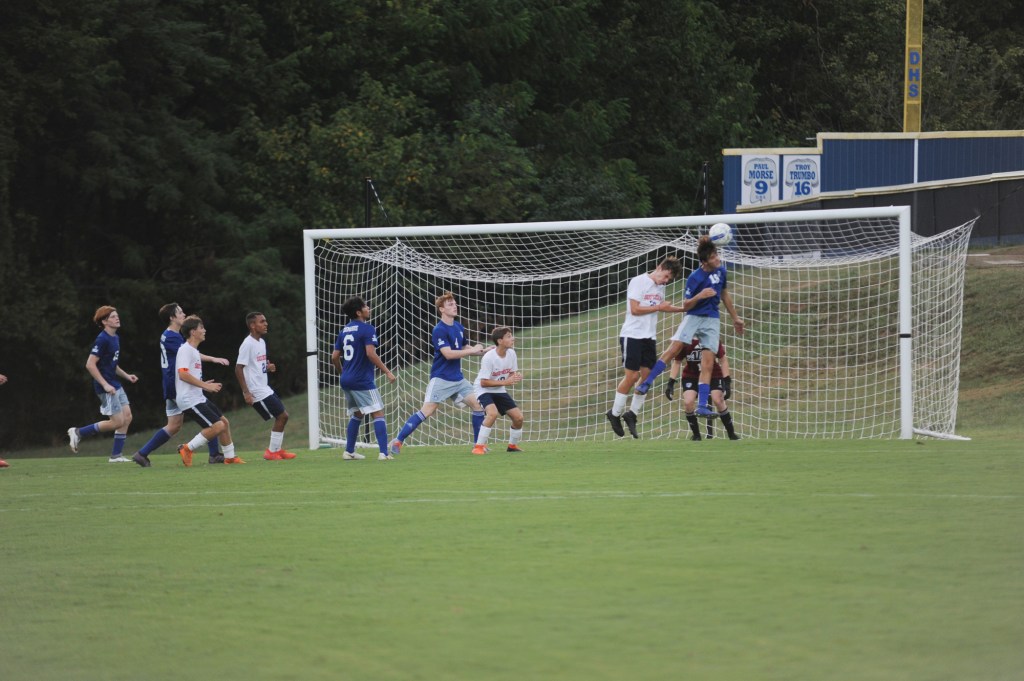 Senior Seth Brunner defends a would be corner kick in Danville's first game of the season. (Photo Derek Brightwell)

With the Danville volleyball team taking a 3-1 victory over Boyle on Tuesday, the Ads hold a 1-0 lead for the week as the boys soccer teams prepare to square off Thursday night in the first match of a boys-girls doubleheader at Rebel Stadium at 6:00 p.m.

The Rebels are coming off of a tough week in which injury and illness left them shorthanded. Cris McMann’s team was able to bounce back with a tough 4-3 victory over South Laurel on Tuesday night.

Danville has been rolling after coming up short in its second game of the year against West Jessamine. Since then, the Ads have won five straight, including the All A 12th Region Championship against Somerset Tuesday night.

Heading into Thursday night’s Rivalry Week showdown, the Rebels are expecting to be nearly fully recovered. One thing to look for will be senior goalkeeper Ethan James. James injured his shoulder in Saturday’s match against Woodford County and was unable to play in goal Tuesday. He did however score all four Rebel goals in the match.

“That raises some questions. He might be healthy enough to play in goal, but that might not be where I put him,” McMann said with a laugh.

Danville will be led by seniors Ethan Redmond and Briar Sanders. Redmond leads the team in both goals (nine) and total points (19) while Sanders leads in assists (10) and is second in total points (16).

Last year: In last year’s only matchup between the crosstown rivals, the Admirals were victories 2-1. The Ads would go on to have the best record in the region (17-1-1) heading into the regional tournament where they fell short to Southwestern in the championship.

The rivalry: While it will be an obviously emotional match Thursday, McMann is trying to keep the Rebels focused on the end goal of the season.

“We just try to focus on not getting overly emotional about it. It is such a big game and a big rivalry and these guys can turn it into something bigger than it really is,” he said. “It’s a regular season game. It’s important for district seeding. But it’s not the season. We’ve got things that we’re working on to reach our goals and this just needs to be another step in that direction.

“Just because you’re emotional in the game doesn’t mean you don’t have to keep doing your job. So we’re just reminding them of what their responsibilities are at each position and keep drilling it.”