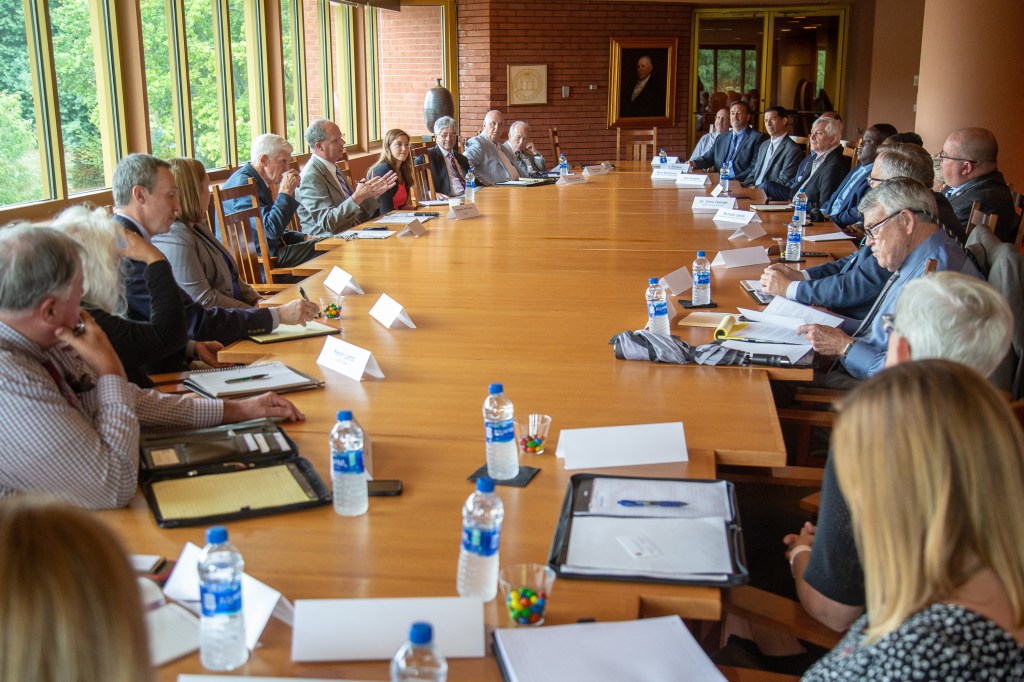 Higher education leaders from throughout Kentucky's second congressional district meet for a roundtable discussion with Rep. Brett Guthrie at the Norton Center for the Arts on Wednesday afternoon. (Photo by Ben Kleppinger)

The cost of higher education was on most people’s minds during an education roundtable event held at Centre College Wednesday with U.S. Congressman Brett Guthrie.

It was the second roundtable Guthrie has held in Danville in a week’s time. Last Wednesday, he spoke with regional leaders about the opioid crisis; this time, he was meeting with higher education leaders from across his expansive second congressional district, which reaches from Garrard and Jessamine counties in the east to Owensboro in the west and Bowling Green in the south.

Much of the 100-minute conversation at the Norton Center for the Arts focused on financial assistance and student loan debt. Guthrie heard from multiple education leaders who were in favor of expanding the reach of federal Pell grants.

Right now, Pell grants help students with financial need pay for college, but they aren’t given out to students seeking basic certifications, such as CDL certificates for driving trucks or EMT certificates for those entering the medical responder field. Those smaller programs don’t require enough credit hours to qualify for Pell funding.

Leaders also told Guthrie they would like to see Pell grant amounts increased, and something done for students whose income puts them just above the line for Pell eligibility.

Guthrie, who sits on the House Education and Labor Committee’s Higher Education Subcommittee, said he is interested in proposals to expand access to Pell grants, though specifically making Pell funding available for small certificate programs isn’t something Congress has been talking about recently.

Guthrie said he is aware that the decision of whether to continue attending college or drop out is sometimes made over not having even just a couple hundred dollars. And, he said, many get it wrong when they think universities are churning out many students with six-figure debts.

In reality, while people who earn their degrees to be a dentist, for example, may have large debts to pay off, the bigger problem nationwide with student debt concerns much smaller amounts.

Centre College President John Roush said as a private institution, Centre may not have much of a stake in the discussion about Pell grants for smaller certification programs, but “as someone who believes all boats are lifted by a rising tide, I am all for this.”

“None of us are enjoying full favor with the general public these days. We’re all held in suspicion that we’re producing students that don’t work very hard, aren’t very well prepared, spend a lot of money, got a lot of debt,” he said. “I can tell you that’s not true of any of our students here at Centre, but we get painted with the same brush.”

Roush said increasing access to Pell grants is easy for him to support because it “advances the common cause of providing the citizens with the change to better themselves. And when they get better, we all get better.”

On the front end, there are problems with limitations on what colleges’ financial aid people can tell prospective students, said Laura Keown, who works in financial aid for Centre College.

“We’re not allowed to say, ‘No, you cannot borrow,’ as long as they meet the requirements,” Keown said. “This has been coming up a lot — wondering what it would look like if we financial aid professionals would have the ability to say, ‘No.'”

Keown said she personally doesn’t want to be able to deny a loan to a student that qualifies, but there needs to be something done about the restrictions on how much information financial aid personnel can share with students considering loans.

“I don’t have the answers but I think that’s the arena we need to talk about,” she said.

Roush said federal restrictions on financial aid people advising students on good vs. bad financial choices puts those financial aid professionals in a tough spot where what they can say is “borderline dishonesty.”

“It harkens back to bad actors who took kickbacks to send borrowers to certain places … I get that there needs to be some limitations on us, too,” Keown acknowledged.

Erin Klarer with the Kentucky Higher Education Student Assistance Authority said current restrictions have gone too far in response to those bad actors from the past, to the point that “hardly anyone” is willing to create even a list of reputable lenders that students can trust to give them fair loans.

“So the financial aid officers say, ‘You have unmet need; good luck!” Klarer said. “And (the students) Google it and they might be getting something close to a payday lender.”

There are also problems on the other end — repaying student loans, according to multiple attendees at the roundtable.

“We’ve got financial aid professionals that can’t figure it out for their own children because it’s that obtuse,” she said.

On the topic of paying for college, Roush said he doesn’t like the national trend of politicians calling for college to be made free to varying degrees.

“I think this idea of anything of any real value being free just hasn’t been my life experience And I don’t think it’s where we need to be taking higher education,” he said. “This idea that we can give it away and it still have a value and add quality to the lives of the students? I don’t think so.”

Guthrie agreed with Roush, saying he has a problem with the idea of some people having to make sacrifices to get through college and others just getting it handed to them. But he said something does need to be done about cost — higher education and health care are the only two industries where costs are rising faster than inflation.

Roush said he believes colleges and universities are obligated to keep their price increases “within the larger national” picture, “which means you’re on the short side of 3 percent, if you go up at all.” But he reiterated the importance of defending the value higher education has.

“We’ve got a major task ahead of us to create the impact that we are of value, we are worth it,” he said.