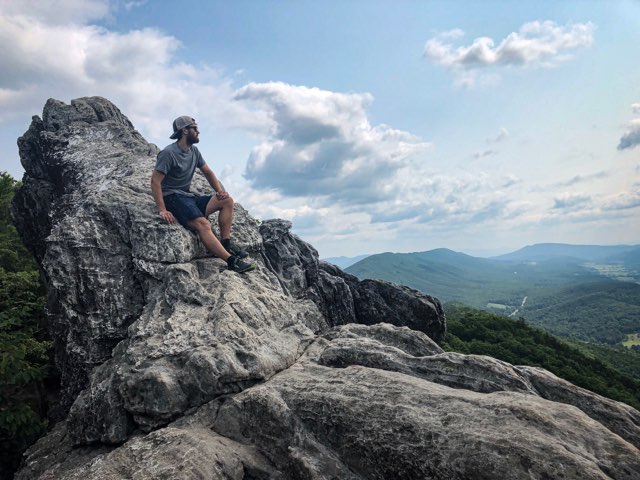 LIBERTY — Micah Smith has always enjoyed the outdoors. He loved hiking in the Red River Gorge and other spots. He started his own kayaking business in Casey County last year.

However, he had never done anything like what he recently did — he hiked the 2,192 miles of the Appalachian Trail from  Springer Mountain, Ga., to Mt. Katahdin, Maine. He called it the “journey of a lifetime” that took him through 14 states in 130 days. That’s much quicker than the average time for anyone who finishes the hike.

“I thought this was just the perfect time to try something crazy,” said the 25-year-old Smith, a former state high school high jump champion for Casey. “I just thought doing it looked like fun and decided now was the time to do it.

“I was working as a registered nurse in the emergency room at (Ephraim McDowell) Fort Logan Hospital (in Stanford). The night shift was bringing me down. I needed to so something different. Everything just came together for his journey. I quit that job and just went out on the trail.” 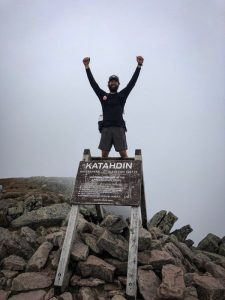 The trip took him through 14 states in only 130 days. (Photo submitted)

His journey started April 17 in Georgia — in the snow. His starting number was 2,259, meaning that 2,258 hikers had started the trail before him this year.

“When I finished in Maine my number was 410. So between Georgia and Maine I either passed all those folks who started before me or a lot just quit the trail,” Smith said. “Only about 25 percent of everybody that starts the trail finishes.”

Smith started the hike by himself even though the Appalachian Trail has plenty of hikers he saw daily. He eventually met a “guy from Tennessee” and the two hiked the rest of the way together.

“We worked well together and got along well,” Smith said.

Obviously, Smith had to restock his food and water supply often. He said the trail either went through a town or near a town every three or four days.

“If you had to hitch a ride in and out of the town, people from the towns knew what you were doing and would stop and pick you up,” he said.

He would load up on protein bars, Pop-Tarts and ramen noodles. That would add about 10 pounds to his backpack which had another 20 pounds of gear. Somehow Smith actually gained five pounds during his hike and joked that if he had calf muscles when he was a high school athlete like he does now that he would have been an Olympic high jumper.

“I didn’t have a stove, so what you do with the ramen noodles is soak them in cold water — I usually put them in a peanut butter jar — for about an hour or so to get them ready to eat,” Smith said. “A lot of people on the trail had small stoves because almost everybody out there had to have coffee. I am not a coffee drinker, though.”

He didn’t often have a fire at night, either. He says after walking 20 to 25  miles per day by the time he got his tent and camp ready, he had little time except to eat and go to bed.

“Then you wake up when the sun comes up and go again,” Smith said. “We would plan our week around where the towns were. Any time we would go into a town we would try to stay at a hostel, which is basically a bunk house, or a little motel. I would take a shower or do laundry once or twice a week. Actually, I think I was pretty civilized looking compared to some people I met on the trail.” 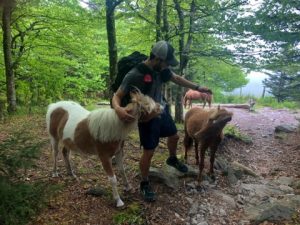 Now that he’s back, Smith will take some time off before facing his next challenge. (Photo submitted)

He also regularly charged his extra cell phone power packs when he had the chance because an app on his phone had maps and would make sure he stayed on the trail.

“Each pack would charge the phone three times. Luckily I never needed that many,” he said. “I did some YouTube videos and tried to document my journey the best I could.”

He said he was never “afraid” during his 130 days hiking even though he was only about 200 miles south of where a murder occurred in Virginia when a man attacked two hikers with a machete and killed one.

“People were freaking out and some got off the trail. I hated that it happened but it never bothered me much,” Smith said. “A lot of people were afraid of bears. I did see about 10 bears but that never bothered me, either. My biggest fear was ticks but I only saw three of them. I only saw one venomous snake. I saw other snakes but just one that could have hurt me. Luckily, I stayed injury free, too.”

The weather presented problems at times but he understood there was nothing he could do about that.

“You are stuck with the weather and whatever it is doing,” Smith, who also played high school basketball for Casey, said. “There were plenty of times it was raining. Once your shoes got wet, that was the worst. One time in Vermont the weather changed quickly. It rained and got really cold. Fortunately we were already in a shelter but there were people showing up blue and shaking because they were so cold.”

The highlights were the views he saw almost daily.

“I loved getting up on the mountains and just looking at where I came from and seeing where I was going,” Smith said. “Just being out there and grinding was fun. Maybe it was just stopping at a creek to get water or hearing the different sounds in the forest. Any time I crossed a state line, I thought it was the best thing ever. I miss all that and the friends I met and made. I won’t forget any of that.”

His parents drove him home and his father joked the first night that he thought he might wake up and find him camping in the front yard since he had been on the trail so long.

“It does feel a little different waking up and not having to hike because that’s what you did every single day,” Smith said. “Physically it was tough but I could do the trail again now and be okay. The mental part, the monotony of getting up every day and doing the same thing, that’s the challenge. That is what makes people quit.

“If you are not mentally prepared, you are going to quit. Several times I thought, ‘What am I doing? I had a good job and left it for this?’ Then I would get to the top of a mountain and remember why I was out there.

“Until this I always thought winning the state high jump championship was my biggest accomplishment. But this is a pretty big deal. I am happy to be home. I am going to take a little time off and then maybe next year look for a job again. However, there are more trails out there. One on the west coast is even longer and I’ve got to admit, I would like to try that. It’s already in the back of my mind because after the experience I’ve just had, I know I want to do this again.”