Admirals shutout Rebels in top half of doubleheader 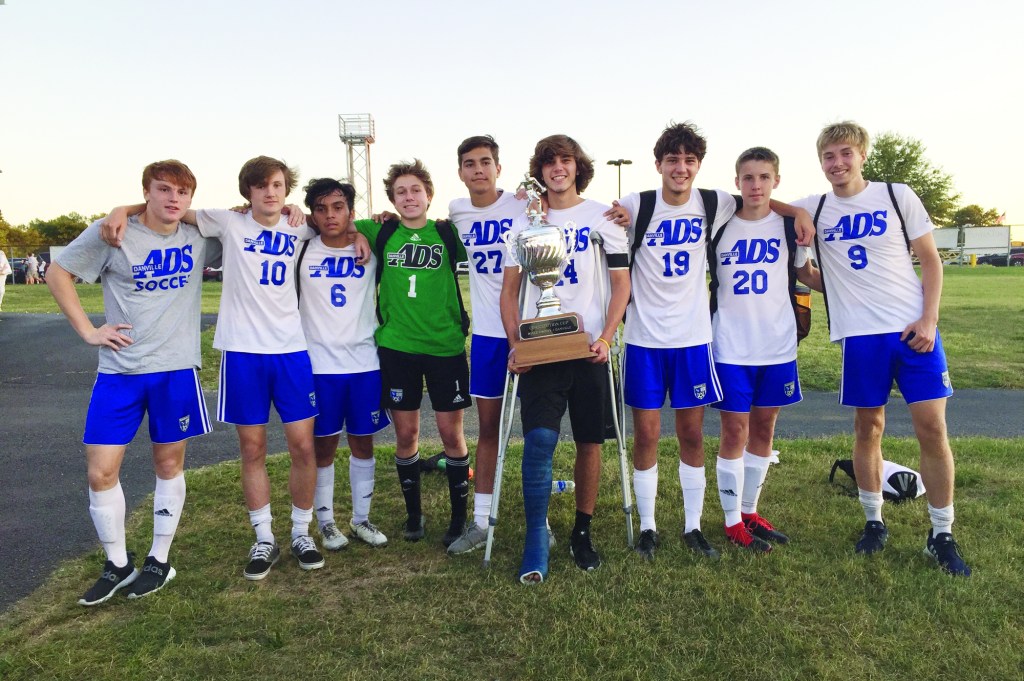 The Danville senior class with the Constitution Cup. (Photo submitted)

Despite the score, the game was actually tied until a late surge from the Admirals in the first half led to three goals to put the game away.

“Of course you can look at how seasons are going and this-that, but you knew it was going to be a fight,” Beauman said. “They’ve got a lot of good players. It’s high school rivalry and it’s awesome. Everybody’s going to bring their best game.”

The win extends the Admirals winning streak to six and gives them a 7-1 record on the year. For the Rebels, the loss drops their record to 3-5.

The turning point of the game came in the second half with Boyle County senior Ethan James appeared to score off of a corner kick. As the Rebels celebrated, the officials waved the goal off, calling James offsides. 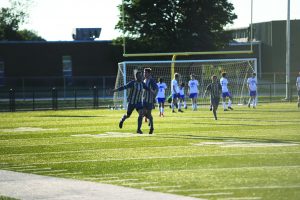 Ethan James celebrates what everyone thought was a goal before the officials ruled him offsides. (Photo Derek Brightwell)

“I got excited when I thought we scored to make it 3-1 and then they called it back. I didn’t agree with that call, but I went and talked to him after the game and the way he explained it — it was the right call,” McMann said. “He said Ethan was offsides on the initial shot and if that’s what he saw, that’s the right call to make. I think that — a 3-1 game and we get excited would have made the difference. It was just kind of deflating.

“And they wouldn’t come over and explain to me what happened,” he added. “I didn’t know what they called and it was frustrating.”

For the Admirals, the first half belonged to Ethan Redmond. He scored the first two Danville goals and assisted on the third, all in the first.

“Ethan’s a phenomenal player. He’s got great speed and strength — you can’t knock him off the ball. And he’s such a quiet guy,” Beauman said. “But man when the ball comes to him it’s such a burst of speed and is super hard to defend. 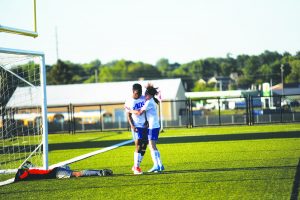 “He’s been a defender for three years and when Sam got hurt we needed some help and had to move him,” he said about the switch to move Redmond upfield. “It’s where he plays during club and stuff so I knew what he can do, but he’s a terrific defender as well so it’s a sort of pick-and-choose.”

The game is Danville keeper Keeton Burnside’s third shutout of the year, and second straight.

“Keeton’s just an amazing young man. He’s such a hard worker. Just an amazing human being. I’m glad he gets to have success like this,” Beauman said about the senior.

Of course, no keeper gets a shutout on his own, and Beauman was also pleased with the way his defense played.

“They did a great job — our defenders. When Sam got hurt we had to drop Ryan (Clarkson) back and he’s such a scrappy little guy,” he said. “You’re going to have to knock him out to make him stop working. I love that, being a small guy too. But they’re very tenacious and want to keep fighting and mistakes happen, but they hustle to make up for that.”

Danville has Marion County at home on Tuesday Sept 10 at 7:30 p.m. while the Rebels are at Bethlehem at noon on Saturday.