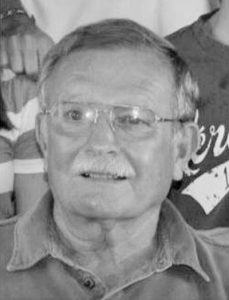 He was born Tuesday, August 27, 1935 at Louisville, KY a son of the late John Joseph “McGee” Anderson and Kathryn “Kitty” Anderson Schnieders. He was married to the former Barbara Anne Snow, his beloved wife of more than 50 years, who preceded him in death January 26, 2012.

Preceding him in death is his twin brother, Jon Anderson, at the age of one; and stepfather, Cornell M. Schnieders.

Joe graduated from Shawnee High School in Louisville, KY, and received a Bachelor’s degree in Electrical Engineering from the University of Louisville. Following graduation, Joe began his engineering career in the United States Air Force and later received a Master’s degree while based in Montgomery, AL. He was stationed throughout the United States, as well as Guam and Germany, and was a Vietnam War Veteran. Joe served 21 years in the USAF, retiring as a Lieutenant Colonel. He continued to work as an engineer for a defense contractor (ORI, Inc.) in the private sector until he retired in 1995 in Danville, KY. He and Barbara moved to Galax, VA in 2004, and enjoyed closer proximity to family, as well as being snowbirds while wintering in New Smyrna Beach, FL. Joe was a talented percussionist, and played snare drum for the Advocate Brass Band in Danville, KY. He loved his children and grandchildren, passing along his love of music, boating, fishing, golf, and skiing. A stroke in 1999 left Joe physically unable to pursue some of his interests; however, he continued to enjoy his family, friends, and caregivers at Colonial Place, with his funny, ornery, joking personality.

The family suggests that expressions of sympathy be in the form of contributions to West Virginia Caring, 169 Diamond Street, Elkins, WV 26241.

The Lohr & Barb Funeral Home is in charge of the arrangements for Joseph “Joe” Chappell Anderson. Condolences may be expressed to the family at www.lohrbarbfuneralhome.com