Lyons Greenleaf BP, the last of a dying breed, will soon close. But it won’t soon be forgotten. 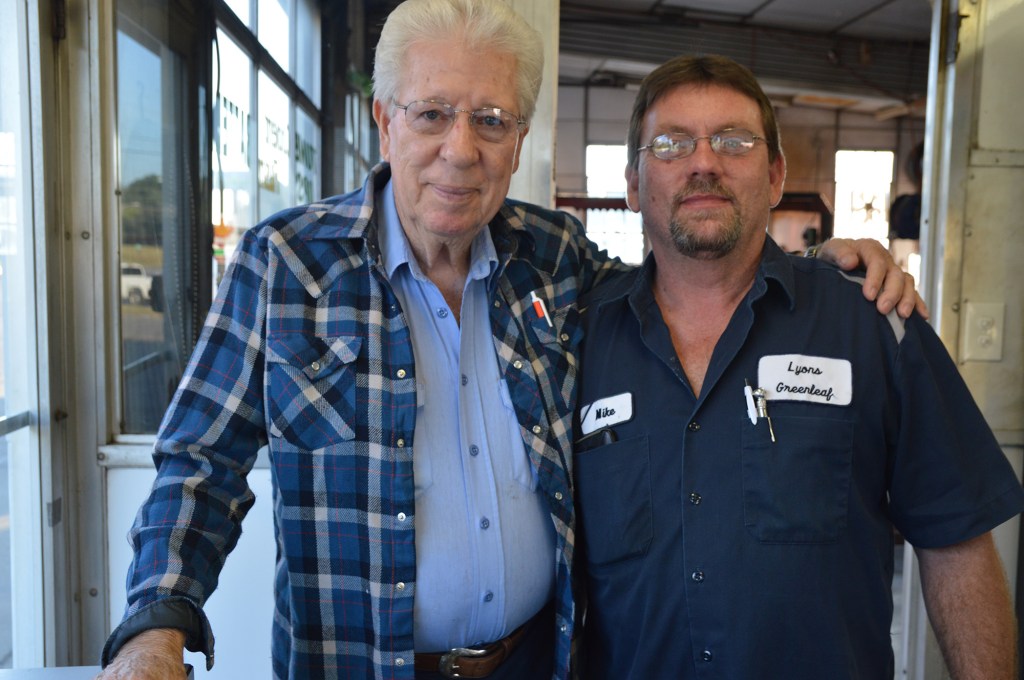 Mechanic Mike Wilson, right, has worked for Floyd Lyons, left, off and on for the past 20 years. (Photo by Bobbie Curd)

It’s early morning in Danville, and there’s a bit of a nip in the air — enough so that Floyd Lyons has his flannel on top of his button-down. He stands inside the Greenleaf BP on Lexington Avenue talking to friends over coffee — the same thing he’s done almost every morning for the past 29 years. 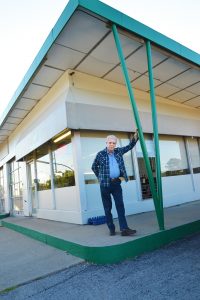 Floyd Lyons stands outside his full-service gas station on Lexington Avenue, which will close later this month. (Photo by Bobbie Curd)

But that’s soon to change. Floyd is hanging up his gas rag as the last full-service gas station in town, or anywhere around these parts, based on what they say. And here, at the Greenleaf BP, they say a lot.

“Oh there’s a good bunch of them that come in here every morning and loaf, and just talk — a lot,” Floyd says through laughter. He just calls them “the loafers.” But this morning, some of them broke away early. Ray Price took off just a second ago, Ronnie and others before him, but Johnny Jordan sits in his chair, sitting up tall over his cane.

Mechanic Mike Wilson, who’s worked for Floyd off and on for the past 20 years, walks in from the garage and Johnny asks them if he should tell me about this morning’s conversation; it apparently involved some creative tips about preparing for a colonoscopy.

Johnny keeps talking, and Floyd tries to stop him, but he can’t because he’s leaned onto the front door and over the counter, cracking up so hard that he has to take off his glasses, wiping away tears of laughter with a handkerchief.

This is every single morning, he says. But over the course of two different meetings at the station with Floyd, a few topics do come up that I can tell he’s not so happy to talk about — retirement, for one. 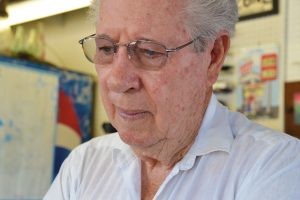 Floyd Lyons talks about what setting up shop on Lexington Avenue has meant to him. He’s operated out of the Greenleaf BP station for the last 29 years, but has been a gas man in town for much longer. “Things have just changed a lot. I don’t see any other full-service stations opening.” (Photo by Bobbie Curd)

Floyd stares out the front window when we talk about his plans after this month. A solemn look comes across his face like he’s in deep thought. He has a good amount of white hair, styled back neatly; his multi-colored tats sprout out from underneath his sleeves; and he wears a fancy plated belt and a gold ring with diamonds in it.

Floyd is pretty slick for almost 80. But with all these daily doses of laughter and friendship, not to mention the extreme customer loyalty, he says it’s hard to ever really feel bad about anything.

I tell Floyd I’ve not only heard from a former newspaper staffer about him and countless others in the community, but at least two from out-of-state who want to make sure we are “writing about Floyd Lyons and how he’s closing.”

His eyes get a little glassy, and he says maybe it’s because he treats people the way he wants to be treated. “I didn’t make as much as a lot of people would, but I’ve got a lot of friends. And I’m really proud of that one thing. When I leave here, if I walk up town? I don’t need to worry about who I’m going to see. Don’t have to hide from nobody. Ain’t worried about seeing somebody I’ve beat.” 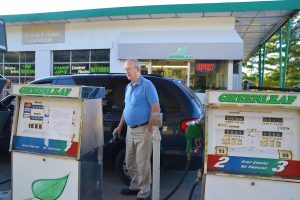 Johnny Jordan jumps up to pump gas while Floyd Lyons is with another customer inside the garage. “Yeah, I pump, too. It gets busy here, and I’m just sitting there, doing nothing, so …” Johnny says. (Photo by Bobbie Curd)

They used to run a towing service out of the station, and Floyd says they once went out to get a vehicle that wrecked on Gose Pike and the bypass, a few years back. “Her purse was in the ditch with money sticking out of it, don’t know how much, didn’t look to see how much.” But he and his grandson gathered all their belongings up, including “a nice fancy camera,” and brought them to the station to secure in their safe.

“Think they were from New York, and when they got out of the hospital, they came by and wanted to know if there’s any chance we found any of their stuff. I said, ‘We got it right back here.’ They sent me the nicest letter when they got home. We never take nothing out of no vehicles whatsoever. And it’s paid back with how people treats us. We just — uh, it’s going to be missed.”

He opened this station in 1991, but he’s been a gas man for longer. Before that, he worked for Maurice Coyle over at the old Phillips 66 on Main Street. When he started working where the BP is now, it was an Ashland station, where Maurice had moved, but Floyd left after three years there to hit the road truck driving, a career he also loved.

He bought Maurice out when he decided to hang up the big rig; he’d driven for 17 years, running 28 states, in a different town in a different state every single night, driving for Ray — one of his morning loafers. “I really miss it, but I’m too old now to get back out there … But that’s alright, have a lot of good memories out there, too.”

He’ll be 80 this month, and says he’s had three back surgeries. The concrete is killing him, and he thought it would be a good month to hang it up.

“I’ll be honest though — I’m already missing it, already dreading it. I ain’t going to quit; I’ll find something to do.” He’s already spoken to one local dealership about driving cars to Louisville and back. 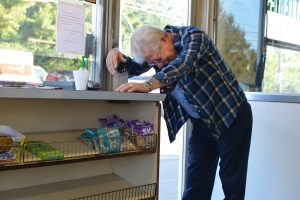 Floyd Lyons laughs as one of the “morning loafers” tells a story from an earlier conversation. “This is every single day,” he says about the atmosphere at the full-service gas station. (Photo by Bobbie Curd)

So far, the U-Hauls have been picked up from the lot, so there’s no more of them. The tanks will be dug up from the front right of the station come Friday the 13th, so that’s the last day for gas. “You know, that’s an odd day to do that,” Floyd says and laughs, but it has to be done. He’s aiming to close shop sometime before the last week of the month, to give himself enough time to pack up the rest of the decades-long collection of tools, memorabilia and other items.

The other day, Floyd says Brian Little came out, asking how he’s doing. He gets his gas from Little Oil, always has, and says Doug and Lana, Brian and the whole family have been great to him. “I told him I’m not doing too good. I’m having second thoughts — he said ‘we can always back out,’” Floyd says, and laughs. “I’ve done went too far now … Not sure what they’re doing with the place, but I wish they’d put in a Hardee’s and a BP like they have in Junction. I’d love that.”

On a phone interview, Doug Little says there are no plans for the property, which Floyd leases from Little Oil. “We’ve worked with him the better part of 20 years … We’re just going to leave it open and either find another tenant, or tear it down and build something else.”

He says Floyd has done nothing short of a tremendous job running the place. “It’s not a real money-making thing, but it provides such a great service to the community … We wanted him to stay as long as he wanted to.” 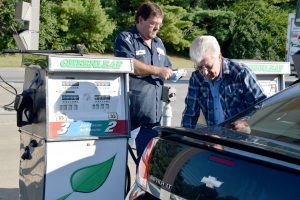 Mike and Floyd work on a vehicle outside the station. (Photo by Bobbie Curd)

Elderly ladies roll up to the full-service side of the pumps one after the other, leaning through the window to talk to either Floyd, Mike or Arthur Gorley, the other mechanic. Floyd says because they take such good care of people there, they’re always fair and make sure they leave with everything checked on their cars. Many have become very dependent on them.

Several who regularly buy gas pull in near the air compressor, where one of the guys pops out and checks tire pressures, then puts air in for free. Every gas tank that’s filled gets fluids checked and windows cleaned, and conversation about whatever they choose to bring up.

“Only thing I don’t really like to talk about is politics. Shew,” Floyd says through his teeth. He says when they start saying, “Trump did this or Trump said that, I get up and just go to the back office. I don’t watch the news, neither. It depresses me and I can’t do nothing about it. So why get upset?” 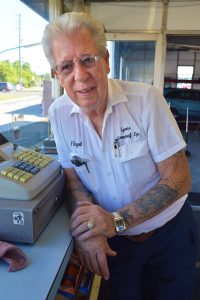 Floyd has started to clean out his office, but the walls are still covered with family photos. He married his wife Linda — who not only does the books for the station, but comes down to make coffee every morning at 3:30 for the crew — when she was 15 and he was 17. They’ve been together for 63 years, so she’s kinda sad about him retiring too, he says.

“My whole family, they’ll have to find somewhere else to take their cars, too,” he says. And that’s a big family, with three children, six grandchildren and four great-grandchildren.

He’s had some “little ladies” actually cry on him, when they find out he’s closing. He doesn’t have high hopes for someone else opening another full-service gas station.

“I’ll be honest, nobody really wants to work now’day. I’ve tried to get more people in here to help, but you just can’t find them. Not for work like this.”

Doug says the lot is bigger than most think; it goes back into the greenspace behind it, and probably is about a half-an-acre, give or take. He says his family sure appreciates the business Floyd has given them, but mostly for what he’s given the community.

“That place has been like the old country store, when you had the potbelly stove and people sat around it, discussing what was in The Advocate-Messenger,” Doug says. “Everybody just comes to discuss everything and get a few things off their mind, so they don’t bug their wives about it.” 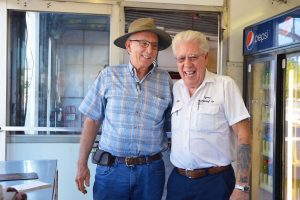 Dennis Oaks walks in, another 20-year-long customer, as they all seem to be. “I go by ‘Charlie and Pearl’s boy,’” Dennis says. But he really does.

Floyd says one day he called and got someone else on the phone, “And they gave me the message that ‘Charlie Perry’s boy had a flat and was coming to get it fixed.’” They both laugh. “Everyone knows Dennis as ‘Charlie and Pearl’s boy.’ That was funny,” Floyd says, then they stand arm-in-arm for a quick picture.

Another woman drives up to full-service, and Floyd says he’s “been knowing her since they grew up in Mercer County together;” she had a brother who used to pick guitar and they’d go watch him play. Floyd and his brother would hide from the school bus, play hookey and jump the train to take it into Harrodsburg. “Cheap transportation, huh?”

Floyd says maybe he’ll hit Burke’s up and see if they’ll let him drive the donut truck; he’s used to getting up early anyway. “I don’t fish, don’t hunt, don’t watch ball games, don’t golf. But I got to listen to all of it,” Floyd says, laughing again about his morning coffee loafers. “It’s just a good atmosphere here.”