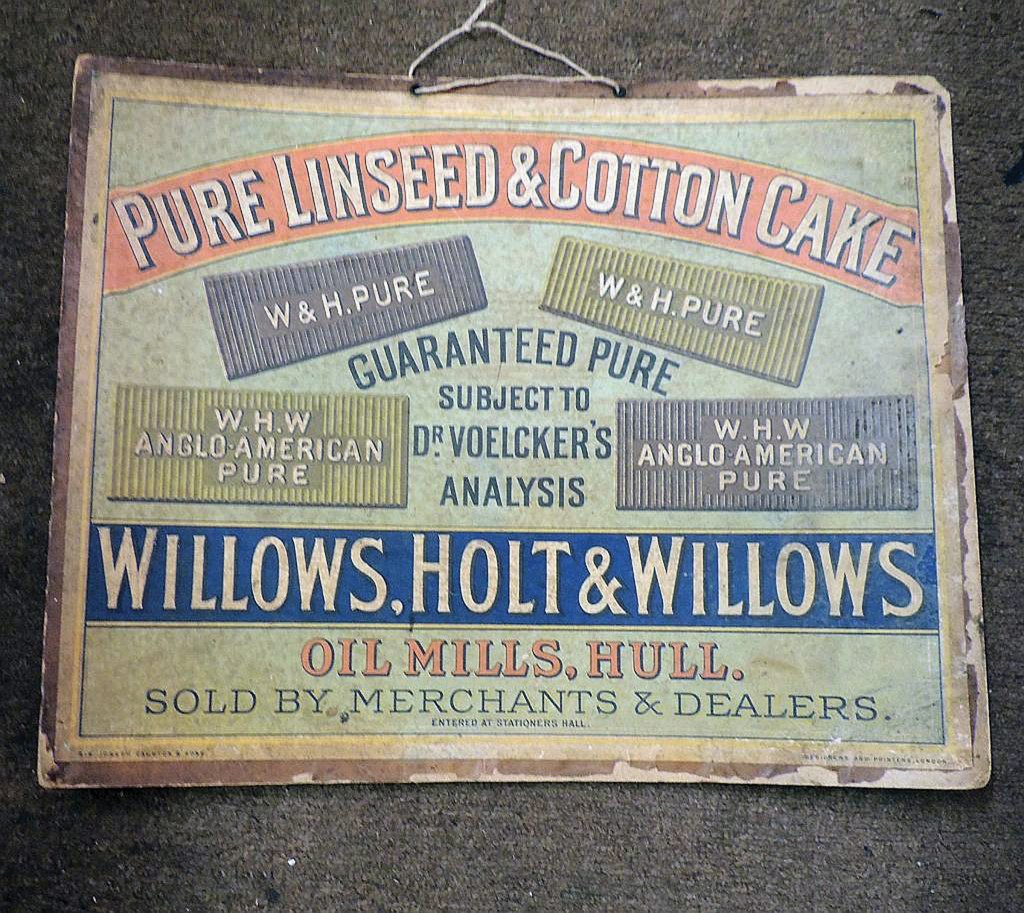 Question: Jerry, what can you tell me about my sign? Did you notice that it’s English? I’ve had it for years and years. Any info is greatly appreciated. Thanks.

Answer: I noticed that it was English right off the bat. As I’ve said before in this column, advertising pieces are hot in today’s market. I don’t care if they are English, American or from Honk Kong.

Advertising pieces that are colorful and graphic are in great demand by decorators and dealers alike.

However, there were some things that I had to look up.

The first was the Willows, Holt and Willows factory. Try as I might, I never could find any information on it. We know that they were a milling / processing center for grains and the like. I didn’t know, but many who farm know that linseed and cotton cakes are a cattle supplement. The Dr. Volecker was also a mute point, lost to the stream of time — for me anyway.

I did find information about the printer of this lithographed pasteboard sign. The readers likely won’t see it but it was printed by Sir Joseph Causton & Sons, London. In 1863 Joseph Causton and his son, also named Joseph, opened a printing company in London. By 1867, they were described as being very successful with a large warehouse on Southwark Street. In 1869 Joseph Sr. was knighted by Queen Victoria at Windsor Castle, and his company name was changed to Sir Joseph Causton & Sons.

Somewhere along the line, two other sons were added. Sir Joseph died just two years after being knighted, but his sons kept the business going until the 1960s, when the company fell on hard times.

In 1984, the company was taken over by Norton Opex and they ceased to operate. As a side note, I discovered that during World War II Sir Joseph’s company printed secret maps for the UK government in an ultra, secret bricked off part of the building. That was cool.

Stylistically, I would say that your sign dates to the 1880s or so.

On to value. I love the colors and the size. It’s a little tattered along the edges. But, being in a general store or feed store, I’m surprised that it survived at all. As I said earlier, advertising is very collectible.

I would wager that at a good antiques show it would be priced at about $150. Thanks for

sharing it. It’s a great piece.