BBQ Festival gets cooking in Danville 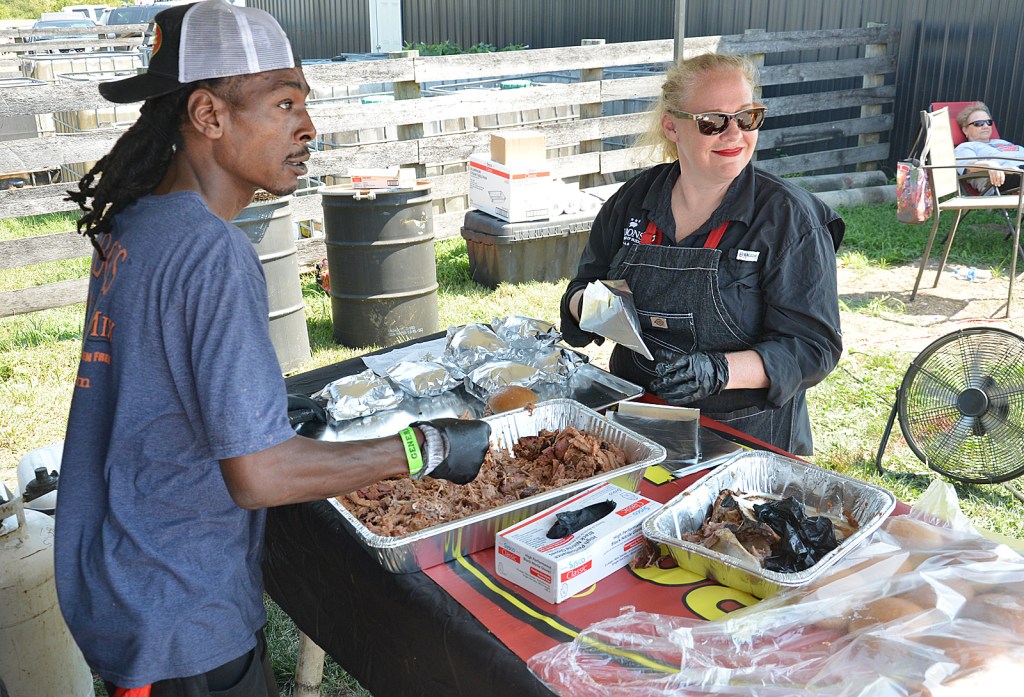 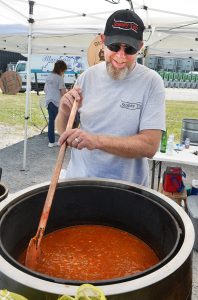 Chris Walker stirs a large kettle of Stoney Top Burgoo Friday afternoon in anticipation of the crowd expected to attend the festival Friday night. The business made 200 gallons of the stew, which is made with beef, pork and chicken, tomato juice, veggetables and 19 spices. (Photo by Robin Hart)

Early Friday afternoon, dozens of pitmasters, crew members and volunteers were busy putting the finishing touches on their signature barbecued meats and side dishes in anticipation of a large hungry crowd for opening night of the Kentucky State BBQ Festival at Wilderness Trail Distillery. The aromas of cooked meat and smoke filled the air while music at each of the barbecue vendor stations seemed to set the mood for what everyone hoped to be a beautiful weekend filled with food and fun.

17th Street pitmaster Phillip Heern kept a close watch on the 168-pound whole hog that was being barbecued for the VIP event later that evening. Heern said two more pigs were being cooked for celebrity pitmaster Mike Mill’s public presentations at noon on Saturday and Sunday. Afterward, the meat will be taken off the bone and sold to the public. The hogs were females, Heern said, and can feed about 100 people — or be turned into 400 sliders.

As Mill’s was overseeing several crew members as they prepared ribs to be cooked and side dishes mixed, he pulled out a gallon jug containing a dark liquid. It wasn’t a special secret barbecue sauce — it was homemade beer that he enjoyed sipping on during the hot afternoon of cooking. 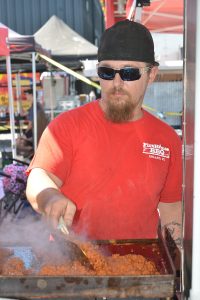 At Ubon’s BBQ ovens, celebrity pitmaster Leslie Roark Scott said they had 100 pounds of pork and 100 pounds of chicken ready for Friday night. “Folks turn out for their barbecue here,” Scott said as she was stuffing pulled pork sandwiches into foil wrappers.

Jesse Sanford of Stoney Top Burgoo and his helpers were also prepared for a large weekend crowd. Sanford said he had 200 gallons of burgoo ready to simmer in his large kettles. Most people have never heard of burgoo, Sanford said. He added that the stew was created around the time of the Civil War. It’s basically vegetable soup with beef, chicken and pork, he said, plus his recipe of 19 spices.

The festival begins today and continues Saturday and Sunday on the grounds of Wilderness Trail Distillery on Lebanon Road. Gates opens at 11 a.m. Saturday and Sunday. For more information or tickets, visit kybbqfestival.com. Admission is $5/day or $10 for a three-day weekend pass. Kids under 12 get in free.