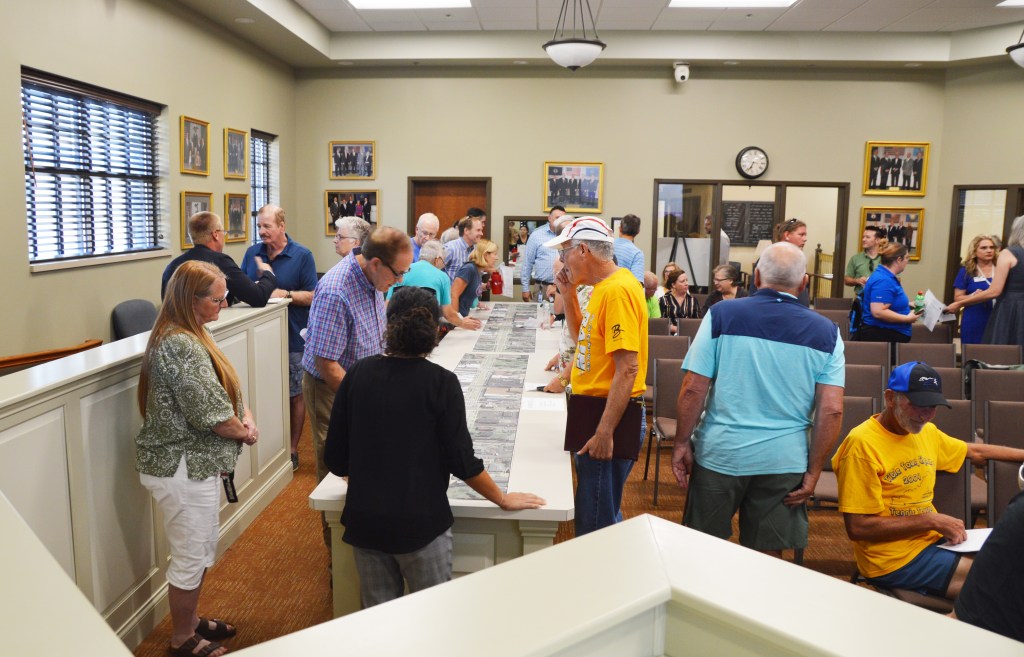 Officials with the Kentucky Transportation Cabinet’s District 7 came back to town Thursday, this time to let the public offer feedback on the trial period of the lane reconfiguration for Main Street. The meeting room in Danville City Hall was packed full of downtown business owners, residents, public officials and some representing the population who want bike lanes added to the now two-lane Main Street.

But many walked away feeling the event was anticlimactic. Just as the informational part of the meeting concluded, a gentleman on the front row asked: “You mean that’s it?”

Dr. Candice Wallace, a facilitator with the University of Kentucky College of Engineering, said yeah — that’s it. “You go look at pictures … fill out the form, vote for the one you want — bike lanes, no bike lanes or go back to what you had …” she told him.

Many were under the impression data that had been accumulated during the trial period would perhaps be shared during the public meeting. But only a handful of comments were pulled out and included in the slideshow.

Wallace had explained three different alternative options to the design, then asked everyone to fill out and return a comment form about what they wanted to see. Cabinet engineers stood behind two maps stretched across desks, showing two of the alternatives — the current setup, which is two-lanes with dedicated turning lanes; and another with bike lanes. The third alternative is going back to the previous layout of four lanes with no dedicated turning lanes.

Alternative A “closely resembles” how Main Street has been for the past six weeks, Wallace said, with a couple of slight differences. The three-lane approach at Fourth Street will be a little bit wider due to the need for a permanent signal at the intersection. “It just has to move a bit. When the new turn-signal is reconstructed, the paint will shift slightly.”

She said the left-turn lanes will be offset a little, too, for better visibility with opposing turn lanes. “And you’re going to have a little bit longer right-turn lane on Fourth Street,” Wallace said. With Alternative A, the lane widths will be 11 feet; the yellow buffer will be 17 feet; and parking spaces will be 10 feet.

Alternative B includes the bike lanes and also uses the same approach with the lanes being wider and a longer right-turn lane onto Fourth Street. The lane widths will be the same at 11 feet; but the buffer zone will be 11 feet wide; and parking spaces will be 8 feet, which is what they are now.

Alternative C would take Main Street back to the previous four-lane design and remove the turn signal at Fourth Street, with no lane space for a committed turn lane. Lane widths go back to varying from 10.5 to 11.5 feet; there will be no yellow buffer zone; and parking spaces stay at 8 feet wide.

Change seems to be working

Natasha Lacy, District 7’s public information officer, opened up the meeting, which didn’t get underway until 15 minutes after its start time due to the long sign-up line at the door. She told the crowd it was necessary to sign in “if we need to follow up with you in some way.”

Lacy said comment forms are due back to the Cabinet in seven days — on Sept. 12 — and postage-paid envelopes were provided. Those who were not able to attend may submit comments by going to the KYTC-District 7 Facebook page, or on Twitter @KYTCDistrict7. Questions and comments may also be emailed to KYTC Project Manager Matt Simpson, matt.simpson@ky.gov.

Wallace explained that Main Street was scheduled for resurfacing this summer, and “District 7 engineers thought a lane reallocation might be an option for this project.” There’s been quite a few safety concerns along this stretch of the roadway, she said, with “several pedestrian- and vehicle-involved crashes, and sideswipe crashes along this stretch of the road … over the past couple of years.”

She said there have also been “a lot of left-turn lane requests at Fourth Street — a couple of other streets too … but quite a few at Fourth Street, though.” So, Wallace said contractors repainted Main Street for a six-week trial period “to help determine whether or not this would be a viable option for Danville.”

And so far, she said, it seems to be. “Why? Fewer conflict points for crashes. Sideswipes are eliminated because you just have one lane instead of multiple lanes …” Wallace said the two-lane design also benefits pedestrians.

Wallace said the trial design seems to provide a “better overall traffic flow … and the elimination of the weaving of vehicles” due to the dedicated left-hand turns at the Second, Third and Fourth street locations.

She said after the previously-held August meeting, where Main Street business owners participated in a workshop of sorts, “we ended up getting a lot of concerns out,” and after that, “we had our engineers directly address some of those concerns, take them back and say, ‘OK, what kind of modifications may be given in those concerns …’”

Then later, on Aug. 15, the group met with area elected officials. She said they had some shared concerns with business-owners: “They asked if emergency vehicles were going to be able to pass, given the lane reduction,” to which she said “yes, it’s not going to be a problem.”

Other comments and questions

“Some folks wanted to address traffic flow and speed; one of the comments we got back was ‘actually, traffic is flowing better, surprisingly.’ I think lots of folks were surprised by that, and there’s plenty of room for emergency vehicles to pass cars.”

Other questions that have been collected focused on deliveries. “A lot of business owners were concerned about getting their deliveries,” Wallace said, which can either be done by delivery vehicles parking inside the center, yellow “buffer area,” or by possibly reserving some areas along roadways for delivery-only, which she said is not ideal due to the limited downtown parking.

“But if they wanted to move forward with that, it would be an option,” she said.

Other questions collected have been about, “‘Does this lane re-allocation affect parking?’ No, it doesn’t,” Wallace said. However, adding bike lanes will.

“We have a couple of alternatives — it’ll be up for all your powers-to-be, and the folks in this room, the Cabinet, everybody to meet and for everyone to decide.”

She said many comments were received about “‘the left-turn light at Fourth is great, can we get one at Second and Third, as well.’” Wallace said as of right now, there’s “not enough volume coming through, nor was there enough of a collision history to actually warrant that coming in.” However, she said “if the lane reallocation moves forward, it’s something engineers will continue to monitor. If it becomes a concern, we can do it in the future.”

Another question was posed previously about getting “no right turn on red” in downtown. “Because of being able to get out into the crosswalks before the cars start going … When a final alternative for this roadway is chosen, that’s something the engineers will review yet again and see if there’s some things they can do, or other things they can do to help pedestrians with safely crossing the roadway.”

Lacy said ultimately, all of the comments and data collected from all of the events will be given to city officials. She was asked if the response from the community so far falls in line with what the cabinet has seen from other towns where downtown lane changes happened.

“Generally, wherever we go, people want bike lanes, or pedestrian paths. Generally, they want that,” Lacy said, especially “since we’re in this movement now in America to get out and get fit, get healthy … more of a push to be mobile …”

Adam Wade agreed. He and kids Sasha and Maya biked to the meeting. “We are very much into the bike lanes, but we’re also into ‘all things foot.’” Wade said it blows his mind “how these bigger cities do so well with bike lands and being functional, and Danville isn’t that great at it. We could do so much better.”

He gave the example of Richmond, Virginia, how it’s “littered with these awesome bike lanes and the city functions amazingly, and it’s bigger than Louisville. Hey, Danville — we’re less than a mile wide. I run across this town in about six minutes, you know?”

But, Wade says at least the lane reconfiguration looks like it will happen. “And there was that angst against it. Change is hard. But I love the fact this has worked, and people are surprised it’s worked.”

He said adding bike lanes will give everyone the opportunity — in a safe way — to get out and be active.

Back inside, during the meeting, one resident was overheard telling others to “take as many forms as you can, if you’re against the bike lanes.” Her comment was that she “could live with what’s out there now, but for God’s sake, don’t put in bicycle lanes.” Her concern was over too many people texting while driving, and that adding bike lanes would be additionally dangerous to already distracted drivers.

Friday, Lacy was asked about a timeframe for the redesign. “It’s a great deal of information to take in and process. A decision will need to be made by Sept. 16. The contractor is scheduled to begin work on that date,” she said.