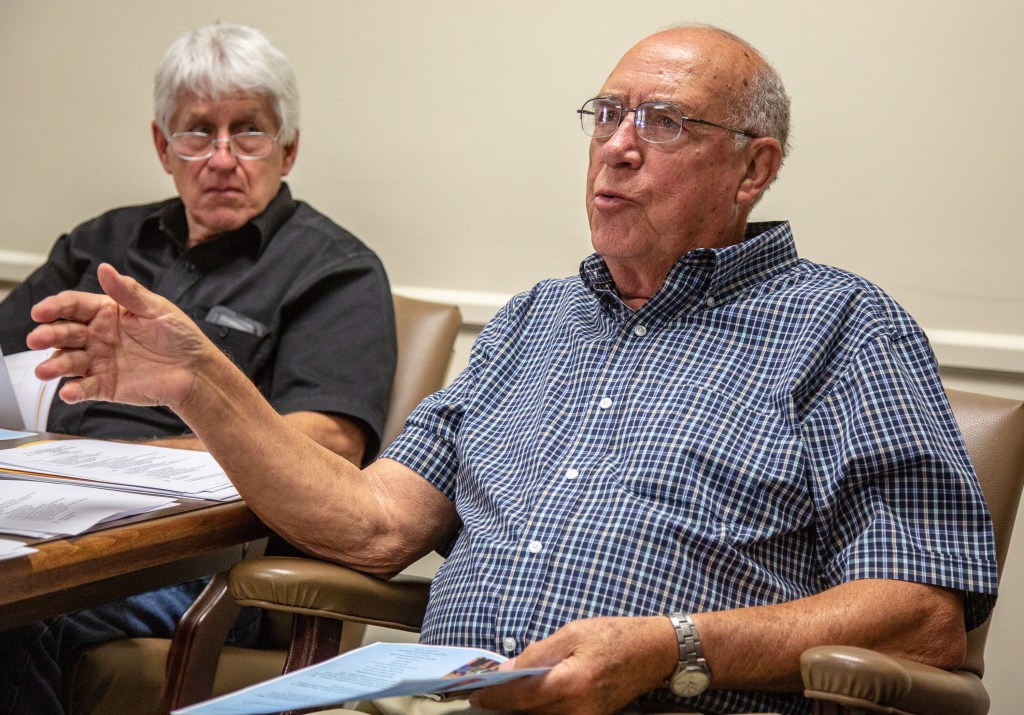 Boyle County Magistrate Phil Sammons talks during Tuesday morning's fiscal court meeting. Sammons made comments about the county's tourism director's legs that made her feel uncomfortable during the meeting. (Photo by Ben Kleppinger)

When tourism director Jennifer Kirchner stood before the Boyle County Fiscal Court Tuesday morning, she expected to talk about the 3-percent room tax her agency levies on hotel stays in the county. But she did not expect public officials to talk and joke about her legs.

But members of the court and some in the audience did just that, leaving Kirchner embarrassed and angry.

“I felt my blood pressure go up and then I got trembly. I don’t even remember what I said,” Kirchner said in an interview about an hour after the fiscal court meeting had concluded.

Some background to understand what happened: Earlier in the meeting, Magistrate Phil Sammons had jokingly made a motion to give Danville Mayor Mike Perros, who was in the audience, a pair of socks because he wasn’t wearing any. It’s not the first time Sammons has made fun of Perros for wearing shoes without socks.

When Kirchner’s turn on the agenda came, she stood at the podium.

“I’m just here to acknowledge we do a 3-percent transient room tax for being an SPGE (special-purpose governmental agency) and also if you have any questions about our most recent financials, they’re on there as well,” she told the court.

While Treasurer Mary Conley was asking Kirchner for a copy of the annual tourism budget, Perros caught Sammons’ eye and pointed at Kirchner’s shoes.

“No socks,” Perros whispered across the room to Sammons.

“If you had legs like that, I’d …” Sammons mumbled in reply, the last part of what he said being too quiet to hear.

“Jennifer, I made a comment about you,” Sammons said. “The mayor’s making fun of you.”

“I’m not making fun of her,” Perros said. “She didn’t have any socks.”

Then Sammons repeated his earlier comment for the whole room.

Multiple people on the court and in the audience laughed at Sammons’ comment, but Kirchner pushed back.

“Listen — I’m a professional woman up here talking about tax rates, not to be objectified about my legs,” she said.

There was more laughter from members of the court and the audience.

“I was just saying to him —” Perros offered in defense. “You’re on me (for what Sammons said).” 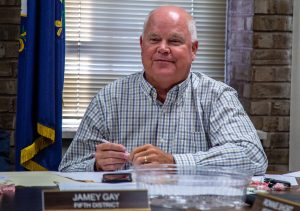 At that point Judge-Executive Howard Hunt corralled the conversation back to the business at hand — taking a voice vote to acknowledge Kirchner had presented the tax rate.

After some further discussion, Magistrate Jamey Gay spoke up.

“Jennifer, if I could, I do want to apologize for the court,” Gay said. “That was completely inappropriate. I appreciate you standing up for yourself, as well.”

“Yes it was,” Sammons said.

‘She took it serious’

“I was extremely upset when I sat down,” Kirchner said after the meeting. “To be standing in front of an elected body that’s all men and to be giving a formal report on taxation and then to have them discuss my legs … I felt as if the whole court was laughing at me. I know Magistrate Gay was not happy with what happened.

“I’m a well-educated, successful woman. … To be minimized in such a way, it feels really horrible.”

After the meeting, Sammons asked a reporter not to put what he had said in print. “When you do that (write a story), take that out,” he said.

When the reporter declined, Sammons offered an explanation.

“The mayor made that recommendation and I shouldn’t have paid any attention to him,” Sammons said. “It was just a joke between me and the mayor. I’m sorry I made the comment. I was just following up on what the mayor had to say. OK? Put it some way about me and the mayor was joking and she took it serious.”

“I think a lot of other people took it seriously, too,” Kirchner said when told about Sammons’ explanation. “… It’s not the first time I’ve experienced something like this. In fact, it happens much too frequently. Most of the time, it’s in a more private conversation or something that’s more one-on-one.”

‘You can’t speak to me that way’ 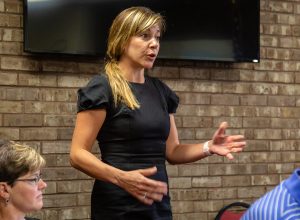 Kirchner said she’s not sure what, if anything, she plans to do about the incident. It left her feeling humiliated, and “it’s unfortunate that I’m a victim in this situation and now it’s left to me to deal with more adversity and obstacles to make it right. No matter what I choose in this situation, there’s no good (solution).”

She said she hopes by standing up for herself, she can “educate men and say, ‘You can’t speak to me that way. I’m a person and that is offensive.'”

Kirchner said it’s not about “being politically correct.”

“There’s just a basic decency that we should treat each other with as professionals,” she said. “And I was not shown that respect and dignity today.”

Perros did not immediately respond to a request for comment.

Kirchner said the incident shows what many women have to deal with on a daily basis in their professional lives. It’s unfair, she said, but it won’t stop her from doing her job.

“I’ll get up there and I’ll do it again because it’s my job,” she said. “But it’s really a mark on my career that I won’t soon forget.”