Is John Calipari or Vince Marrow the better recruiter? 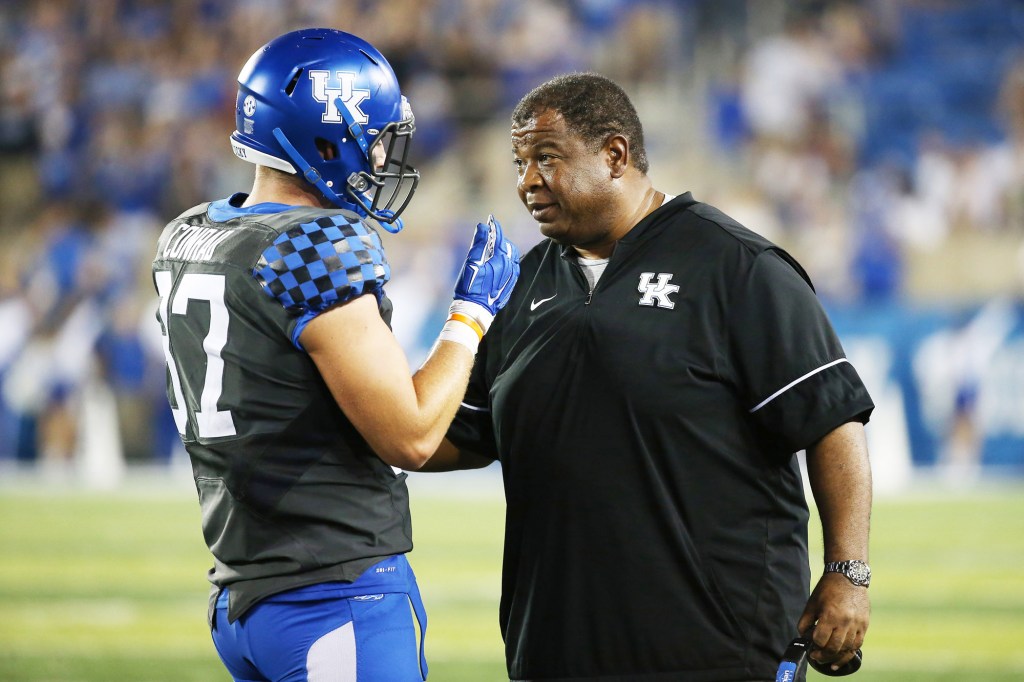 Vince Marrow has not helped UK football land No. 1 recruiting classes like John Calipari has done in basketball, but next season UK could have 12 four-star players on defense – a remarkable rise in star power. (Vicky Graff Photo)

Recently a long-time University of Kentucky fan who has season tickets to both men’s basketball and football games posed a question that I was not sure how to answer. She wondered who I thought was the better recruiter — John Calipari or Vince Marrow.

The more I thought about the question, the harder it became for me to answer. Calipari obviously has had the higher ranked recruiting classes — but shouldn’t he considering the magnitude and tradition of Kentucky basketball. Yet what Marrow has helped the football program do during his time as recruiting coordinator is unprecedented. He’s bringing in big-time talent consistently that few ever thought UK football could and has helped make UK football a national brand.

Marrow also has to help recruit up to 25 players annually while Calipari and his staff usually target four to six players.

My instinct tells me that Marrow might actually be the better recruiter because of the odds he’s overcome but then how do you not respect the first-round draft picks Calipari has had or players he’s put into the NBA. He also has a national championship.

I decided to reach out to several media members who cover both UK football and basketball for their thoughts knowing there is not a right or wrong answer. Not everyone asked wanted to respond but those who did were free to use any perspective they wanted to make their choice.

Tyler Thompson, Kentucky Sports Radio editor-in-chief: “It may seem hard to compare the two, but both John Calipari and Vince Marrow have succeeded in recruiting by taking unique approaches. Although Billy Gillispie made a mess during his two years in Lexington, Calipari inherited a blue blood program with great tradition. He capitalized on that and brought in arguably the most important recruiting class in Kentucky history in John Wall, DeMarcus Cousins, and Eric Bledsoe, giving new life to a program that desperately needed it.

“From there, Kentucky’s record of putting players in the pros became Calipari’s calling card and keeps the Cats at the top of every elite recruit’s list. The one-and-done rule used to be viewed as a stigma of the sport, but Calipari’s success at Kentucky forced the rest of college basketball to adapt, including the almighty Mike Krzyzewski at Duke.

“On the flip side, Vince Marrow took a program with little history and reputation and made it a viable option for a niche of players from the state of Ohio that maybe weren’t good enough to get offers from Ohio State or Michigan, but wanted to play against great competition. The Ohio pipeline has transformed Kentucky football, breeding enough success that Marrow is now able to capture the attention of elite players and even compete with those Big Ten programs for prospects.

“In that sense, you could argue that what Marrow’s done is more impressive, but hauling the best or second best recruiting class every year speaks for itself. Kentucky fans should feel incredibly lucky to have both in Lexington.”

Jeff Drummond, Cats Illustrated managing editor: “This is an intriguing question. After debating it a bit in my own mind, I would submit that it should be judged somewhat like an Olympic sport with degree-of-difficulty factored into the comparison.

“There’s no disputing that John Calipari is one of the best recruiters on the planet (for any college sport) but he’s also in the perfect situation to make that happen. Billy Clyde Gillespie proved that it’s not quite an ‘auto-pilot’ situation, but it probably feels like one compared to the gang over at the football complex. When coach Cal sets out to recruit a class, he’s got instant access to almost every 5-star prospect at the top of the rankings.

“Vince Marrow doesn’t have that luxury, but he has helped shatter all the prior notions that UK cannot compete against the traditional ‘big boys’ of college football and expanded the Cats’ recruiting sphere from the old, familiar five-hour radius to all corners of the country.

“If pressed for a definitive answer, I would go with coach Cal and those 30-some NBA Draft picks he has produced. Marrow has excelled in finding underrated guys who turned out to be 4- and 5-star players, but to be on Cal’s level he needs a few more elite-level guys like current 5-star commit Justin Rogers. I wouldn’t put it past him.”

Michael Bennett, host of “Just The Cats”, a daily sports radio show:  “It’s not even close. Vince Marrow is the king of recruiting for UK. Don’t get me wrong Cal is one of the country’s top recruiters and I’m glad he is at UK. I would not trade him for the world, but comparing UK basketball to UK football in recruiting is comparing my speed and agility to the likes of Lynn Bowden. We all know how that would turn out.

“UK has a rich history when it comes to basketball. When Cal arrived the Wildcats had seven national championships, add Rupp Arena in the mix, most successful coaches will continue with the winning tradition.

“When it comes to UK football the Wildcats have no tradition at all. That alone makes it more difficult for Vince Marrow & company. The ‘Big Dog’ is not only getting nationally known talent to consider Kentucky, but is now getting them to commit. I can’t remember in my lifetime when UK was competing with the likes of Michigan, Ohio State, Miami, Florida State, Penn State, etc. and winning.

“Prove me wrong because I’m right.”

Alan Cutler, former WLEX-TV sports anchor: “Cal. He did a better job recruiting at UMass and Memphis than many realized. And, his first class at UK, coming in so late, is one of the greatest recruiting jobs ever. Not just at UK, but ever. Plus, how many billions will Cal’s recruits make?

“That being said what Vince has done for UK and (coach Mark) Stoops is past remarkable. I can’t think of another UK assistant football coach who’s done more. Great people skills and he keeps it real. In today’s crazy world of coaching salaries, he’s underpaid by a lot!”

Keith Taylor, Kentucky Today sports editor: “I think John Calipari is the better recruiter simply because he has produced more NBA prospects and Kentucky is such an easier sell for him because of the tradition in UK basketball.

“Vince Marrow is starting to get the recruits to keep the program consistent and that’s a big plus where the Wildcats have been lacking. It helps in the foundation of the program and keeps each recruiting class relevant. Calipari has a smaller pool to choose from and his recruits have been on target with the exception of a few during his first 10 years at Kentucky.

“I think Marrow is a perfect fit for the Wildcats and his influence has definitely been an asset to the program. It’s perhaps the best hire Mark Stoops made at UK.”

Larry Glover, host of “Larry Glover Live,” a daily radio talk show: “I would say Calipari given his success at UK and his job of building national title contenders at school outside the power conferences. That said, the fact that this question can be asked does say a lot about what Vince has done with UK football. Ultimately, UK football will have to win consistently and make some national noise for any chance of supplanting Cal as the better recruiter.”

“They have both accomplished something historic. No college basketball coach in the sports history has pulled in one incredible class after another every single year the way John Calipari has and no assistant coach at Kentucky at least in the football modern era has consistently cleaned up the way Vince Marrow has. Morrow probably has more hands-on personal and day-to-day involvement with the many players he recruits each year because that’s the way football recruiting goes. Calipari serves as the closer for the top basketball prospects in the country.

“In relative terms Calipari players have certainly been ranked higher but he is also promoting a brand in Kentucky basketball that is infinitely easier to sell than Kentucky football.”