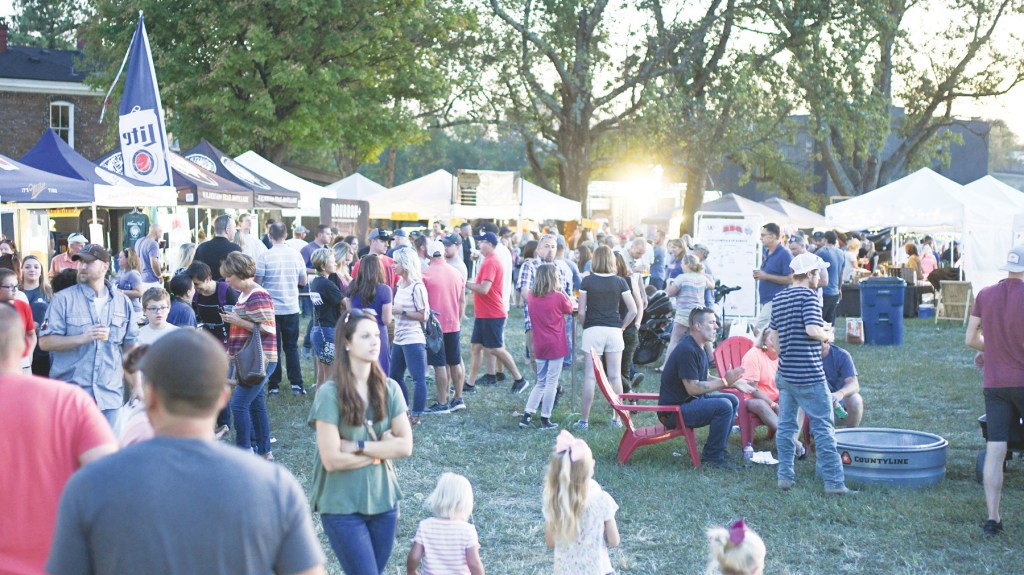 Mother Nature smiled on the 9th Ky. State BBQ Festival this past weekend. 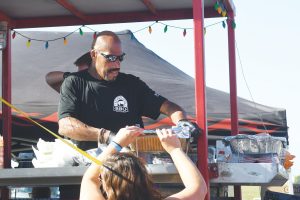 A man hands down a fresh tray of pulled pork. (Photo by John Scarpa)

“It was an amazing turnout this year, and the weather was certainly on our side,” said festival president Brad Simmons.

Organizers are still sorting through the data in order to come up with an accurate number of people who visited the festival, “but you can tell by the crowds it was well attended,” Simmons said.

“Saturday was by far our largest crowd — solid line of cars coming in all day and night.”

People from 32 states visited the festival, including Tennessee, Ohio, Michigan, Illinois, Florida, Pennsylvania and Maryland. Even folks from the Philippines, Thailand, Australia, Spain and Canada were at the festival too, Simmons added.

Friday night’s VIP event alone raised more than $5,000 for the Heart of Kentucky United Way, according to Simmons.

Local non-profit organizations also helped the more than 200 other volunteers make the festival run smoothly, he said. For example, members of the Danville Band Boosters handled admissions; Perryville Youth Football group and Boy Scout Troop 27 kept the grounds clean from litter and trash; and Boy Scouts from Troop 119 “assisted us with squeezing lots of lemons for our homemade lemonade shake ups, just to name a few,” Simmons said.

This year there were more attractions added for children to play on, including a Ninja Warrior obstacle course, a rock climbing wall and paddle boats, Simmons said. And a special appearance was made by Somernites Cruise-In with their antique vehicles.

In addition to the seven pitmasters and their crews who cooked and served up their specialities to the crowd, there were also other vendors selling beer cheese, burgoo, roasted corn on the cob, kettle corn, fudge and cotton candy.

Organizers of the barbecue festival haven’t really slowed down yet, and are already making plans for next year’s event. “The barbecue festival is constantly evolving. We look for ways to increase the number of visitors to Danville and enhance the overall experience of everyone that attends,” said the festival’s vice president Rick Waldon.

“Next year will be the 10th ever Kentucky State BBQ Festival and we began planning for that Sunday night,” Waldon said. “It will be special for sure.”

Attendees mark where they traveled from to attend at the Kentucky State Barbecue Festival on Sept. 7.(Photo by John Scarpa)

A man cuts open a whole hog in preperation for Sunday sales while a family watches. (Photo by John Scarpa)