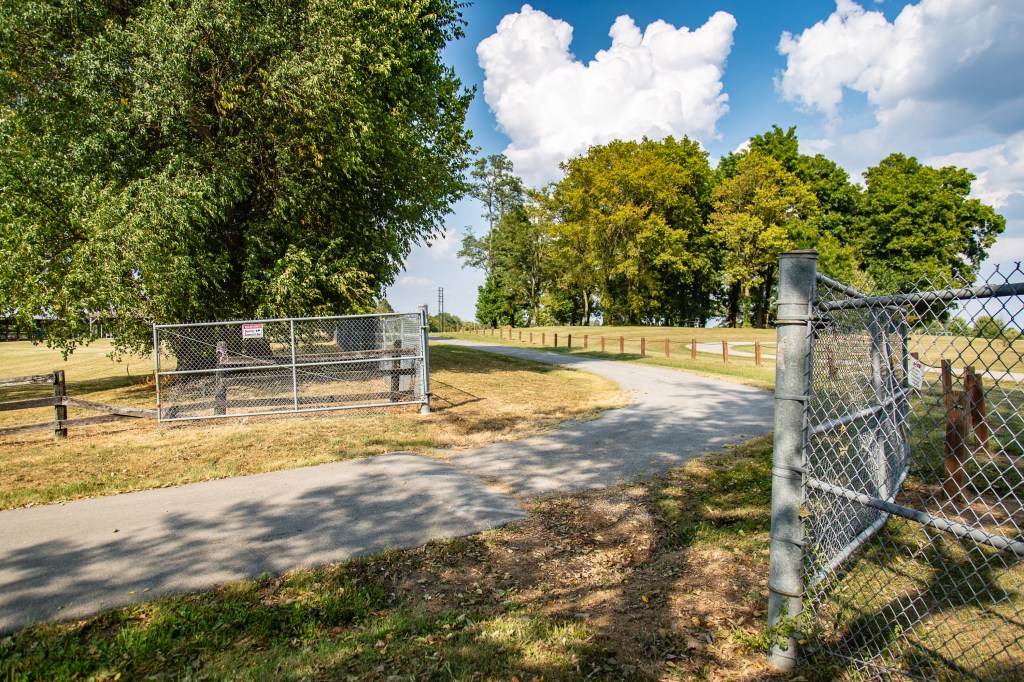 The gate between Whites Park to the left and Millennium Park to the right sits open Wednesday afternoon, a day after the Boyle County Fiscal Court voted to reopen it. The gate had been closed and locked since the summer of 2018, a decision which prompted significant negative reactions from some in the community. (Photo by Ben Kleppinger)

More than a year ago, Boyle County magistrates voted to close and lock the gate between Millennium Park and Whites Park — a back entrance to Millennium that provided access for some from the U.S. 127 Bypass in Danville.

This week, magistrates voted unanimously to reverse course and open the gate 24/7, due in part to a large volume of complaints, many of them apparently from parks staff.

“I’ve lost sleep over this damn gate — excuse me, but it’s that simple,” Magistrate Phil Sammons said during Tuesday’s fiscal court meeting, before asking for a discussion of the issue with parks Director John Bell.

“What do you think we need to do? Do we need to open the gate?” Sammons asked Bell.

That launched a lengthy discussion of all the issues that first caused the county to close the gate.

Through traffic can use Millennium Park as a cut-through when the gate is open, and speeders travel within feet of playground equipment on the narrow, unstriped road through Whites Park. A few speed bumps don’t seem to fully solve the speeding situation.

The arguments for opening the gate were repeated, as well. It would provide better access to Millennium Park for people coming from the bypass side, as well as improving access for emergency responders to the park, Bell said.

“And convenience — I’m not going to hide that,” Bell said. “There is convenience for staff to be able to enter and exit from that side of the park.”

Bell also noted an incident earlier this year when the state road department decided to resurface Perryville Road and local government was caught unaware. The only open entrance to Millennium Park was blocked by the construction, and people inside the park were trapped for about 48 minutes.

“That park is 21 years old and it’s the first time that ever happened,” Sammons said. “I doubt it will ever happen again.”

Magistrate Jason Cullen said that’s not true — there was an accident that caused the exit to Millennium Park to be blocked. “It has happened more often.”

Bell pointed out there will also be new traffic in the area when the new Boyle County Middle School opens.

“I don’t like that point,” Sammons said. “That’s one reason to keep it closed.”

“I’m wondering who’s going to be responsible when the first kid gets hit out there,” Sammons said.

“The driver of the vehicle,” Bell responded.

Magistrates discussed closing the gate at night, but it was pointed out the main gate is open at all times — and there’s no available parks staff to take on the responsibility. Ultimately, the fiscal court voted to open the gate permanently “until we decide to close it again,” according to Judge-Executive Howard Hunt.

Closing the gate was not a popular decision among some, who have pestered county officials about it persistently since it was closed in the summer of 2018. A lock keeping the gate closed was vandalized multiple times, prompting magistrates to set up video surveillance of the gate in April in an attempt to catch the vandal.