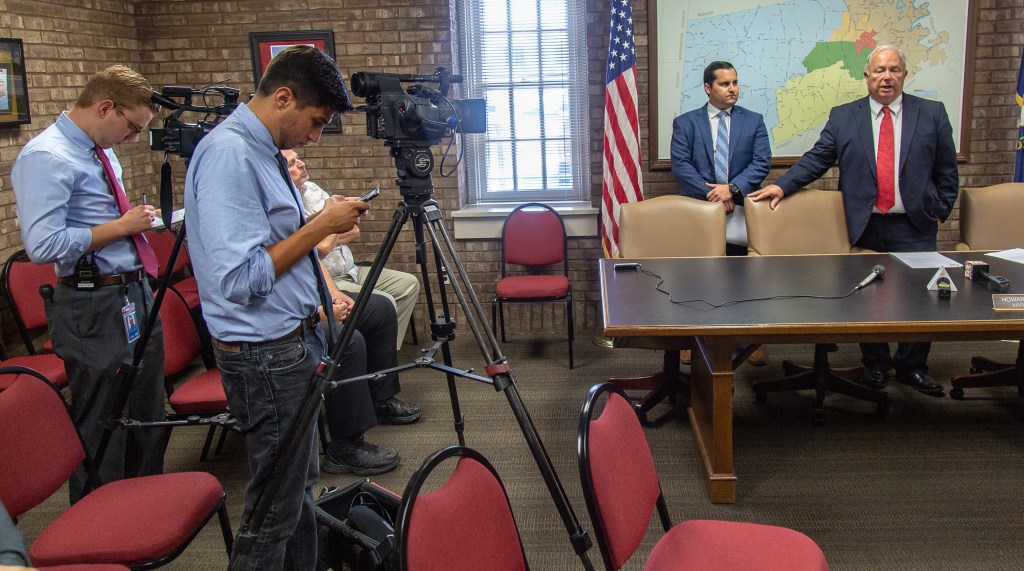 A press conference held by Boyle County Judge-Executive Howard Hunt Wednesday was attended by Lexington TV stations, a local radio station and a handful of local residents, as well as The Advocate-Messenger. (Photo by Ben Kleppinger)

A Boyle County magistrate has attempted to privately apologize to the local tourism director for a joke he made about her legs during a public meeting, according to tourism director Jennifer Kirchner.

The day after Magistrate Phil Sammons’ controversial comment, some men who had been at the meeting also issued public statements.

Danville Mayor Mike Perros sent a letter to the editor to The Advocate-Messenger Wednesday morning, in which he apologized for his role in what happened and said Kirchner “was right to stand up for her self and her professionalism. I was wrong to respond to a previous comment made to me in a public meeting.”

“I as the Boyle County Judge-Executive neither agree with nor embrace the comments put forth by Magistrate Sammons during Tuesday’s fiscal court session,” Hunt said. “Our county has a rich history of putting strong, capable women in key positions. Our citizens will not and should not accept anything less than every individual to be treated with respect and consideration they deserve.”

Kirchner said Hunt and Perros both came to her before making public statements to let them know what they were going to say.

“I’m so appreciative that people are taking the time to recognize that this was a really unfortunate thing to have happen and we can’t have it happen again,” she said.

Kirchner said she appreciates the gesture of officials participating in diversity training, but she also thinks “these kinds of things take practice in your everyday life” and a single training won’t be enough to end attitudes that continue to affect many professional women on a daily basis.

Kirchner said Sammons called her on Tuesday after the fiscal court meeting and said “he was sorry I took his compliment wrong.”

“That was kind of another layer — that really pointed out to me the lack of understanding about the situation,” she said.

Sammons called Kirchner again on Wednesday and was “very distraught,” she said. He “offered some straightforward apologies” and stated regret for what had happened, she said.

Sammons did not respond to a call asking for comment Wednesday afternoon.

Where do we go from here?

Kirchner said she has been somewhat surprised by the level of attention the story has gotten. That attention can be good because it can lead to change, but she also said she worries the more publicity there is, the more “potential it gets for being more salacious.”

“I don’t want to just add on to political mayhem. I don’t think this is a political issue,” she said. “I am in a place where I feel strong as a woman and I feel like I do have support … It’s getting attention for a reason and at the end of the day, I’m quite happy that it is, because it’s gone on too long.”

Kirchner complimented Magistrate Jamey Gay for speaking up and apologizing for Sammons’ comment during the fiscal court meeting — “that was a pivotal point for me,” she said.

After a man says or does something that demeans them, women can often find themselves wondering “Am I crazy? Did anyone else see that? Was that my fault?” Kirchner said.

Because Gay spoke up during the meeting, it helped reassure Kirchner she wasn’t overreacting, she said.

During the Tuesday meeting, Sammons had made fun of Mayor Perros for wearing shoes without socks. Later in the meeting, Kirchner was presenting information about the local transient room tax to the fiscal court when Perros pointed to her feet and whispered to Sammons, “No socks.”

Sammons mumbled a response, then after Magistrate John Caywood warned Kirchner “they’re talking about you,” Sammons restated his response for the room.

“I said, ‘If he had legs like that, he wouldn’t have to wear socks,'” Sammons said.

Multiple people on the court and in the audience laughed at Sammons’ comment.

“Listen — I’m a professional woman up here talking about tax rates, not to be objectified about my legs,” Kirchner responded.

There was more laughter from members of the court and the audience.

“As the Danville-Boyle County Convention & Visitors Bureau’s executive director, Jennifer Kirchner is a highly-valued member of our Economic Development Partnership team. The behavior demonstrated by some individuals during her presentation before the fiscal court meeting yesterday morning was both discourteous and unwarranted.

“As one of our hard-working professionals, we believe that she should have been afforded a respectful forum, free from discrimination and harassment, while appearing on business before a local government body.  And, we expect that any person — whether an employee, a civic leader, a citizen, a guest, or a visitor — should be treated likewise in accordance with our community’s strongly-held values.

“We encourage all of our partners to reflect on yesterday’s events and to engage in meaningful conversations within our community to foster inclusive behavior.”