Danville, Lincoln square off for what could decide top district seed

Thursday night's match-up between Lincoln and Danville could end up being for the top seed in the district tournament. (Photo Derek Brightwell)

Thursday night’s 7:30 match-up between Danville and Lincoln County could very well decide who will finish as the 45th District’s top team for the regular season.

“It would pretty much be for the first seed because if they win — even if they lose another game it would go to the head-to-head,” Danville coach Brent Beauman said. “It’s a big game. Going into the district tournament, you want that 1-seed. It just puts you in a better spot to hopefully go onto the region.”

The Patriots enter the game unbeaten on the season, with a 9-0-3 record, and a 4-0-1 record against other 12th region teams. However, the Ads will be their first district opponent as the next three games on their schedule find them lining up district opponents within one week.

“They’re having a fantastic year. This has got to be their best year. I don’t know for sure. They’ve got a great team,” said Beauman about Lincoln. “It’s a group of seniors that you can tell have progressed Lincoln soccer over the years. That’s what you want to do. You want to make it better when you go than when you got there.”

Danville enters with only one loss, which came in the second game of the season to regional foe West Jessamine. Since then, the Ads have rattled off seven consecutive wins to move to 8-1 on the year. Lincoln County is the only remaining district match for Beauman’s team, after they took care of both Garrard County and Boyle County in shutout fashion.

“It’s just — there are a ton of good players on this team. I was expecting us to be pretty much where we are right now in the standings” Beauman said. “It’s taken people playing out of position, learning new spots to make it work. It’s not nearly as clean or as pretty but we’re still winning and still scoring goals. That’s what important.”

Lincoln is led by senior midfielder Trey Cummins who leads the team in both goals (16) and assists (eight) for a total of 40 points on the year. Senior Hawk Randall has also contributed 11 goals this season. Senior keeper Carter Tillet has also managed five shutouts this year to aide in the unbeaten season.

“Trey is just so fast and can hit the ball so hard. You have to be careful and you have to be smart because no matter what’s going on in front of you, next thing you know he’s past you,” said Beauman. “You have to be focused and know that’s what he’s going to do. With some teams you’ll be able to recover, you’re not going to recover with him. He’s too fast.”

Danville enters with a more balanced attack, led by seniors Ethan Redmond — whose 11 goals have all come during the current winning streak — and Briar Sanders — whose 11 assists extend his all-time school record. In addition, senior Gabe Cisneros and junior Remilson Forlevil have six goals each, giving the Ads four players with double digit point totals. 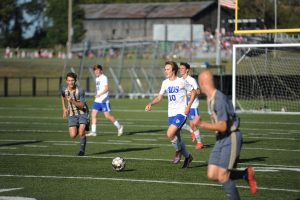 Briar Sanders is second on the team in total points (19) and first in assists (11). He’s one of four players with double digit points this year for Danville. (Photo Derek Brightwell)

“That’s been typical pretty much over my career here. We’ll have one or two that are definitely scoring a ton more goals. But you’ll have three, four, five guys with 10 goals and four or five assists. Last year, I think we had almost three with 20 goals,” the Danville coach said of his balanced attack. “That’s what you want in a team because if one guy goes down or a team gameplans around him you have other options. It makes it a better team effort.

“They’re very good at that. They’re definitely good friends who care for each other. When somebody’s not at their best, somebody will pick it up.”

Senior keeper Keeton Burnside has tallied four shutouts during the winning streak, including three in a row heading into Thursday night’s showdown. Beauman gives credit to Burnside, but also the overall play of the defense in front of him, which has had to be shifted around with Sam Brunner’s injury in the second game of the year.

“Definitely with Seth (Brunner) — a senior centerback three year, almost four year starter in that position. This year he’s taken on more of a leadership role,” he said. “He’s communicating more, helping out — the way we’re playing is a little different than we’ve played in the past so he’s able to just set back a little more and wait and start the attack. We’ve got two sophomores playing the outside. They’re good players, but definitely having Seth as that senior in the middle to keep them on pace and put them where they need to be and help them out.

“Zachary (Morgan) coming in this year — I mean he’s a junior, he’s played but just moving into the team. People like to say a lot of things, but if you can play you make friends real quick on a team,” Beauman added. “He can definitely play and he’s done a great job stepping into that kind of defensive center-mid role where he just sits in front of those back three. He does a good job because that was always a big issue. We’d have a hole between the midfield and the defense. With him in there now, that hole is clogged up and it’s made a big difference.”

Overall, Beauman knows that this match will be a dogfight, but believes that his team is prepared for it, despite not being 100 percent.

“I know (the Patriots) are very much ready for the game. I hope we will be ready. We’re slim in numbers and are very tired and sore,” he said. “We lost Sam and now we’ve got a few others that are having some nagging injuries that are slowing them down. Hopefully we’ll be able to compete with them because they’re scoring and going. It’ll be a good test for us. I think we’re up for it.”