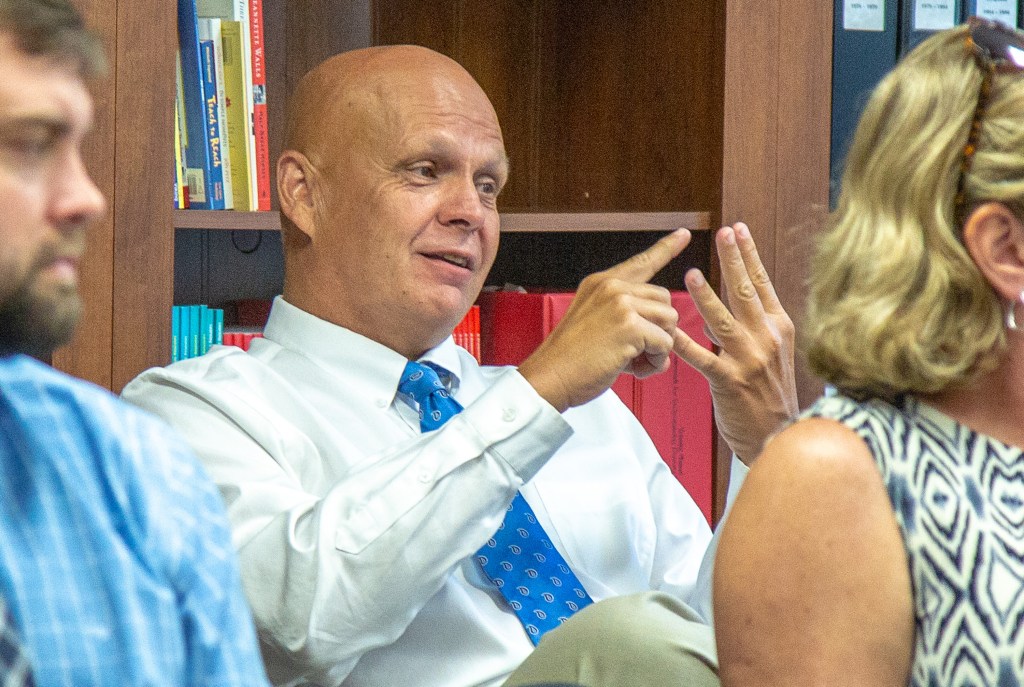 Danville Director of School Services Ed McKinney lists off the many requirements bus drivers must meet in order earn their CDL certificate and drive a school bus for the district. (Photo by Ben Kleppinger)

Danville’s school board is considering a raise for bus drivers to help address what the superintendent says is a “critical” shortage.

It’s bad enough that there has been a “very real conversation” about at what point school must be canceled because of a lack of drivers, Superintendent Tammy McDonald said.

The district needs at least 13 drivers to be at full-strength, but currently has just nine. Two substitutes who aren’t interested in working full-time have taken on a full-time workload temporarily, to allow the district to squeak by with 11 routes instead of 13, according to Director of School Services Ed McKinney.

“It’s basically a supply and demand issue,” McKinney said, before complimenting the subs who have stepped up to keep the buses rolling and school open.

“I’m not gonna name the two that do it but — Vince Tucker and Chris Hill,” he said, earning some laughs from board members. “Those guys are just great folks that just show up and they’re not looking to be hired for an open route. … And then we’ve got maintenance guys that are willing to stay after and come in before … We’re getting a lot of loyalty payment back to the district or it would really be tough.”

“We don’t have buses overloaded, but we have buses at capacity,” McDonald said. 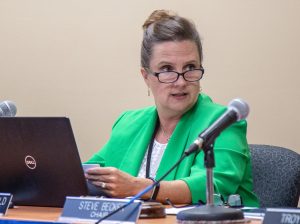 The district has six people who have expressed interest in becoming bus drivers, but none of them has a CDL certificate, which is required to drive a bus and takes about two months to earn, McDonald said.

The district planned a CDL class for seven applicants initially, which it is providing at the central office. But one of the seven has since dropped out.

“They may change their mind as they go through the training,” she said of the remaining six.

Bus drivers must meet very specific standards to do their jobs, McDonald said.

“We need to elevate them up and show them how much we value what they do, because if they don’t show up, we don’t have school,” she said. “And to get a CDL — it is not easy.”

McDonald said the shortage is bad enough that it’s already led to delays in preschool starting and in some students getting home after school. Schools and the central office are fielding increased calls from parents wondering when their kids are getting home; plans are being made for staggered bus routes and delayed school starts if the number of drivers drops further; and bus drivers are working overtime to transport athletic teams, eating into Athletic Director Lisa Fisher’s transportation budget.

McDonald provided three options for increasing bus driver pay to the school board Monday night. The board could vote next Monday to approve any one of the three or come up with its own proposal. McDonald’s proposals are:

McDonald said an administrative position at central district was eliminated this year, which saved the district about $33,000. She proposed the cost of the bus driver raises could be taken out of those savings, meaning it wouldn’t affect the district’s bottom line.

The raises, bonuses and better trip pay are designed to prevent the district from losing any of its existing drivers, and to bring what Danville pays drivers more in-line with what surrounding districts are paying, McDonald said.

According to data presented by the superintendent, three out of four nearby school districts pay their drivers more than Danville does. In Danville, drivers start at $14.42 an hour and can make up to $18.82 an hour if they have at least 24 years of experience.

The largest proposed raise would mean new Danville bus drivers would earn more than Boyle County bus drivers but a few cents less per hour than Garrard and Mercer drivers. Highly experienced drivers already make more in Danville than in all the other compared districts except Mercer; the $1 or $1.50 raise would make Danville’s experienced drivers the highest paid in all five districts.