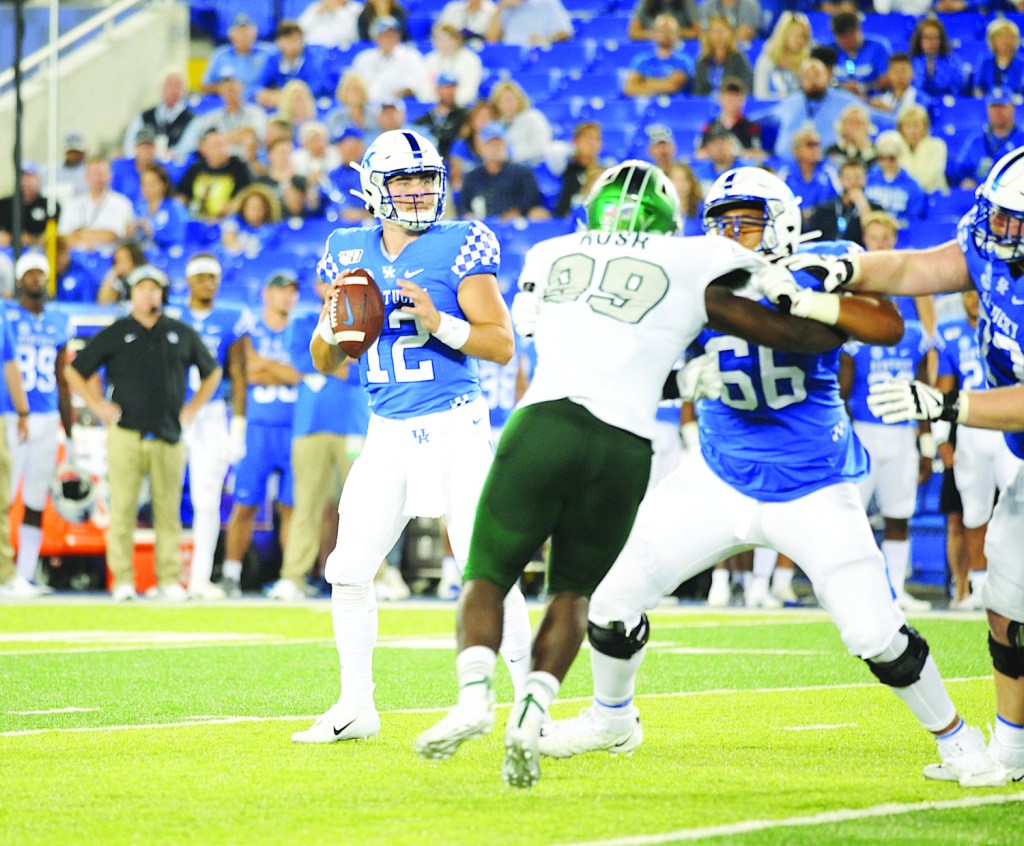 Sawyer Smith (12) completed a 54-yard TD on his first pass in a UK uniform after starting QB Terry Wilson left Saturday's game with a knee injury. (Photo by Vikki Graff)

As soon as quarterback Terry Wilson stayed on the ground after being tackled in the third quarter of Saturday’s win over Eastern Michigan, Kentucky receiver Ahmad Wagner started praying.

“Terry is a tough guy. When he didn’t pop back up, it was a scary thing. It silenced the crowd and was just hard to watch. Terry is a special guy,” said Wagner. “We are all really hurt by what happened.”

His fears were right as Wilson suffered a torn patellar tendon and against No. 9 Florida on Saturday night at Kroger Field the Cats will start Troy graduate transfer Sawyer Smith at quarterback.

“He is energetic. He is an energy guy that just brings a different type of energy to the team,” Wagner said.  “We love that about him. He makes plays on the field. That’s the reason he is here and why he was successful when he went out there.”

“In practice he takes shots and is not afraid,” Wagner said. “We know that about him. As soon as he gets in the game (last week), he took a shot. He runs hard and plays hard.

“He is tough as nails and we love that. He’s going to go in there and give you everything he has and that is all you can ask.”

That’s what Kentucky certainly will need against Florida, especially after ending a 31-year losing streak to the Gators with a win at Florida last year that the Gators obviously remember well. However, Smith started the final seven games for Troy last year after starter Kaleb Barker got hurt and went 5-2 while completing 144 of 229 passes for 1,669 yards and 14 touchdowns. He also ran for 191 yards. In the Dollar General Bowl victory over Buffalo, he was 31-for-44 passing for 320 yards and four touchdowns.

That may not fit the scenario many have imagined where the UK offense will be hamstrung without Wilson’s speed and running ability to lean on when plays break down. Smith has convinced the coaches he’s nimble enough that the offense will not need any tinkering with Smith taking over.

“The best thing after 29 practices is that we thought going into our first game that we would have to have two game plans and we didn’t think we had to do that going into game one,” Gran said.

But does Smith have the personality that can rally teammates around him like Stephen Johnson did three years ago when starting quarterback Drew Barker went down with a back injury? Johnson helped UK overcome an 0-2 start to win seven of its next 10 games.

“I think the guys have a lot of confidence in Sawyer. The guys believe in Sawyer and we’re going to play to win no matter who is playing. Everybody better get that straight right now,” Stoops said. “We’re sad for Terry and it stinks because it’s part of our game, but believe me, we’re going back to work with the intent to win a football game.”

Gran has no doubt that the players will rally around Smith — something the quarterback said he noticed as soon as he got on the field last week.

“He is a tough, hard-nose kid. You saw the guys were rallying around him when he went into the game,” Gran said. “He gets along with everybody fantastic. He is a great addition to this team and he is a competitor.”

Even better for Gran is that Smith has actual game experience — over 600 snaps — and should not wilt under pressure in his first UK/SEC start. Remember that Wilson made his first SEC start at Florida — and won.

“I think that was huge that he has played in games (when he transferred to UK). We thought when we got him that was really good,” Gran said. “He was not bothered out there at all (against Eastern Michigan). That was not too big for him.”

Saturday’s game with Florida is really big for UK. The game is sold out, will be shown on ESPN and SEC Nation will also be in town. Smith will have a chance to make a national name for himself.

“Sawyer is going to be great,” Kentucky junior running back A.J. Rose said. “He knows the offense very well, and like I said, ‘Next man up.’ We have all of the faith in him.”