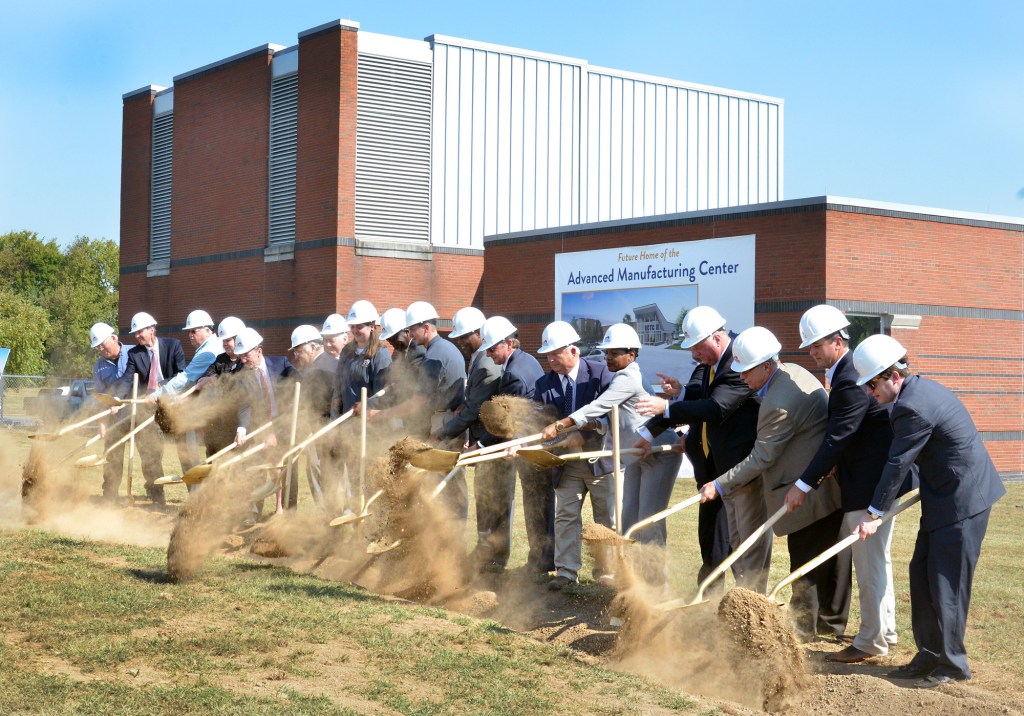 Several school dignitaries and government officials scoop and throw shovels of dirt as part of BCTC's groundbreaking event for its Advanced Manufacturing Center on Thursday. (Photo by Robin Hart)

Boyle County’s Bluegrass Community & Technical College held a groundbreaking ceremony on Thursday for the expansion of its Advanced Manufacturing Center.

The nearly $5 million project will add 13,780 square feet for the Advanced Manufacturing Technician and Electrical and Industrial Maintenance programs allowing the college to increase the programs’ graduates from 38 to 76 annually, according to information shared at the ceremony.

Braeden Baker, 22, will graduate from the AMT program in the spring, so he won’t be enrolled when the new facility opens in about 16 months. Speaking to the dozens of local, state and federal officials, industry leaders, bankers and education professionals under a tent on its campus in the John Hill Bailey Industrial Park, Baker said he was a first-generation college student. He and his wife live in Harrodsburg, and he’s been working at Hitachi Corporation for two years. Hitachi encouraged him to apply for the AMT program and is sponsoring his education. He is currently attending his fourth semester and will complete his associate’s degree in the spring, Baker said.

The program has helped him obtain several soft skills including verbal and nonverbal communication skills and problem solving skills, in addition to his technical education.

“With this new education center, students just like me will be able to learn skills that set them apart from others in this industry,” Baker told the crowd. “With the latest technology, more space and quality instruction, students will have some of the best opportunities to be successful.”

Whitney Roots, who is also a fourth semester AMT student, told the large gathering that she has worked at Hitachi for five years. “I’ve been approached multiple times to apply for this program throughout the years. And I’ve always been pushing the opportunity away due to the fact that I’m 28 years old and have never been to college and wasn’t the best student academically in high school,” Roots said. 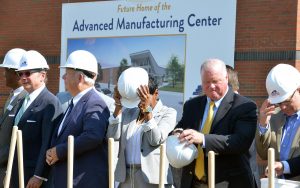 But she eventually “decided to give it a try” and is now has a GPA of 3.9.

Roots said she will now be graduating debt free because of Hitachi’s sponsorship of her education, which will also “help my home life financially.”

Dr. Jay Box, president of the Kentucky Community & Technical College System said that 75% of the credentials that the college awarded to students last year, “align with the top five job sectors in this state. We are preparing students to go to work in Kentucky for the jobs that are available.”

Box added, “Manufacturing is a career, not just a job, and we’re very proud of that.”

In 2016, BCTC was awarded one of 25 Kentucky Work Ready Skills Initiative grants to build the AMC in Danville. With $2,736,000 given by the state, the college, under the direction of Dr. Erin Tipton, had to raise more than $2 million in matching funds.

BCTC contributed just over $1.1 million and $1 million was raised from within this community, according to a news release. The Boyle County Fiscal Court, Boyle County Industrial Foundation Inc., and the City of Danville each contributed $100,000 or more to the project. Companies that gave between $50,000 and $99,000 were Caterpillar Inc., Corning Incorporated Foundation, Harrodsburg-Mercer County Industrial Development Authority, Inter-County Energy and the Whitaker Foundation.

“The Advanced Manufacturing Center will have a high bay, open-lab concept consistent with workplaces in the manufacturing field. Four additional classrooms will surround the open lab providing space for instruction, student projects, meeting space and other instructional-related activities,” according to the release.

Braeden Baker, a fourth-semester student in the Advanced Manufacturing Technician program, addresses the crowd that gathered for BCTC’s groundbreaking ceremony on Thursday. Baker said the new center will help other students like him to learn skills that will set them apart from others in the industry. (Photo by Robin Hart)