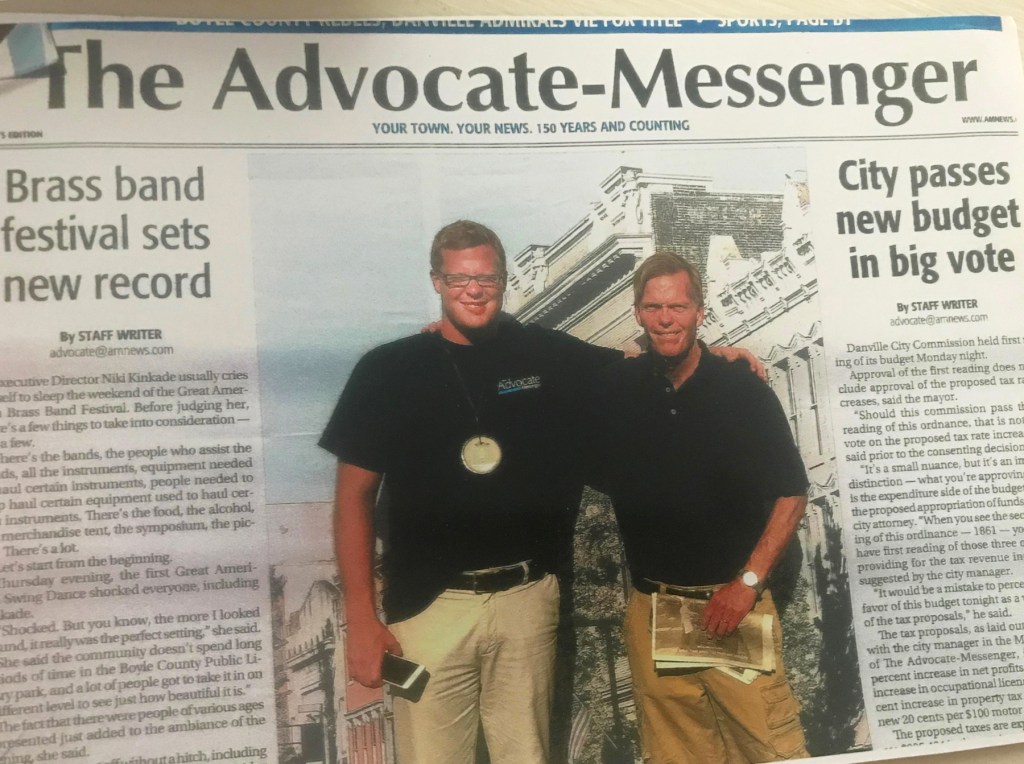 David Brock says his dad, Herb, must've liked this picture from the 2014 anniversary celebration for The Advocate-Messenger. "He has about three of them around his house," David said. Herb was particularly proud of being able to call his son a fellow journalist. (Photo submitted)

Herb Brock, a man known for giving a voice to those who otherwise would not have one, died this week. He was an Advocate-Messenger staffer from 1979 until he retired in 2010, and his career was something that he was very proud of. His son, David Brock, says as strange as it sounds to say about such a wordsmith, there really are no words to describe what the job meant to his dad.

“But he was always — what was most important to him, family first — always,” David said. But that “doesn’t mean just us,” he said, sitting next to his mom, Jerry Brock.

They have a pretty small, nuclear family, he said. “But he had such a depth of care and love for everybody he was related to, and not just by blood. He carried all of the people who he had loved and who had loved him in his heart …”

Herb’s wife and son said out of all of his accomplishments, he was probably most proud of the Rally on the Square events, held in Constitution Square Park. “He created a place in Danville where you had to come if you were going to seek a high office in the state of Kentucky, and everybody did come. He was very happy that was embraced,” David said.

The first one was in 1987. Jerry recalls the Oshkosh overalls she adorned with a red, white and blue “VOTE” patch across the front that a 6-year-old David wore. He still has some of the old-timey hats, covered in stickers and buttons from all the politicians.

The event connected to Herb’s dream. “A dream of his was to bring something to Danville that would be important … for the entire state of Kentucky, and to do it in a way that was professional,” David said. Herb scheduled a brass band to play during the first rally, which ultimately lead to a chain of events creating the Great American Brass Band Festival. Jerry says they even got him up on stage to acknowledge him during the first few festivals. 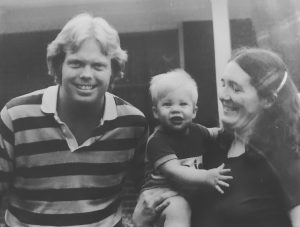 Herb, David and Jerry Brock in a family snapshot in the summer of 1980.(Photo submitted)

Jerry and Herb met 52 years ago at Georgetown College; they’ve been married for 47. She says Herb was really proud of the fact he has a grandson on the way — David and wife Sarah expect baby Brock, a boy, in November.

David laughed. “He was distressed and annoyed in the distinction in the teddy bear as no longer the staple baby present.” He and Jerry told the story about how Herb went out to find a simple stuffed bear for his grandson, but could only find llamas and other creatures.

“Then he found Build a Bear,” Jerry said. “They asked him, ‘Do you want a squeaker inside it? Do you want this or that on it?’ And he just wanted a bear …”

“I can hear him now: ‘I just want a bear, and I want you to build it for me. It’s right there in the name.’ And they did,” David said. Jerry now has a box of teddy bears at the house that Herb was apparently procuring, in case he wasn’t able to find a regular one again.

“If there was one thing about Herb, he was always prepared,” Jerry said.

Former Advocate-Messenger Editor John Nelson seconds that. “He’d take interview notes with a Sharpie. I’d walk back there, and he’d have all these really neat stacks of notepads … things outlined; he was just really organized.”

John said when Herb received a community service award from the Kentucky Press Association the year he announced his retirement, likened to a lifetime achievement award, they asked John for a quote. He told them that he could always depend on Herb’s stories being long, always having a sidebar and “a sidebar that would often be longer than the story.”

But John said Herb’s “downtrodden” beat stands out too, something Herb and former editor John Davis created. For Herb, it was important to cover groups like people of color, people with disabilities, the poor …

“He really took that seriously, and did a really good job with it,” John said.

“I don’t want to make him sound like a martyr, but my dad cared so much about the people in the community who needed help, needed someone to advocate for them,” David said.

Herb’s favorite stories to write were about people whom he met in his everyday life. He knew all those people; he liked people who were up early, hitting the pavement. He had a desire to know the people who were doing the hard jobs, and living lives that others may overlook, lives that weren’t glamorous.

“He was very convicted about giving them a platform and a spotlight … He really cared a great deal for people whose stories would otherwise not have been told. That was an essential part of who he was, not just as a newspaper man and journalist, but as a human being,” David said.

But, as his son said, Herb was also known for his “lacerating wit and sense of humor,” and with some of his hard-hitting columns or investigations, he did make some “enemies,” so to speak.

“His self-deprecating sense of humor, though, I think is what made him to be able to connect to people, even when he was having to be very critical of them professionally,” David said.

John Davis previously told the Advocate, “He had readers who were always going after him, but he was always able to maintain a friendly relationship with them.”

David said that most often, if someone sent Herb a scathing complaint letter, he would likely end up pen pals with them. But his most popular pieces weren’t always the most sensational.

“Some of his greatest pleasures in writing columns were tapping subject matter in his house,” David said, “sometimes to the consternation of his wife and child who didn’t realize that their home life —”

“Yes, who didn’t realise their homelife and foibles were going to end up being fodder for his column writing. But it was all out of a deep reservoir of love, particularly for his wife, son and his pets,” David said.

Herb was also incredibly proud to have his son on as an Advocate-Messenger staffer before he retired. “I didn’t fully appreciate the fact I had been given both a genetic gift for a love of journalism, writing and words, but also a role model … I couldn’t fully appreciate that until I was an adult and got to actually observe him and work alongside him,” David said.

Herb had a gift for words that “always made me proud and a little bit jealous. His ability to speak very plainly but forcefully and with a sense of humor — it shaped me in my personal and professional life,” he said.

In the more than three decades’ worth of Herb’s journalism experience, there were a lot of important stories that were able to “see the light of day,” David said, whether investigative, a people story, public affairs, “or just in that vein of somebody you’d meet in the line at the restaurant, working on your car … He gave equal standing and dignity to everybody … whether they were the head of a hospital, or in a hospital bed without insurance.”

Herb previously told the Advocate that he was raised by a newspaper-reading mom, which instilled something in him about the news. “He got his heart from his mother … but also his knack and desire to do really hard-hitting journalism from her. She liked the news,” David said. Herb’s mother instilled in him that it was important that there are people writing the news in the places that they lived, for their communities. “And that blossomed into his column.”

As David prepares for his son, he said he owes his father. “He helped shape everything that’s good about me as an adult, as a journalist. His love for his family was paramount … He cared and loved me, but also my mom. So much so, that there wasn’t a moment in the day that I didn’t feel that. Ever.”

Nelson said Herb was a “Community Treasure,” repeating the theme of The Advocate-Messenger’s Progress edition from earlier this year, which included a story about Herb.

“He was that. A community treasure,” Nelson said. “It’s the perfect way to describe and feature him.”

To read the story about Herb Brock published in The Advocate-Messenger’s 2019 Progress edition, visit amnews.com.

Visitation for John “Herb” Herbert Brock II, 70, of Danville, will be 5-8 p.m. Monday, Sept. 16 at Stith Funeral Home in Danville. The funeral service will be 10 a.m. Tuesday, Sept. 17 at Trinity Episcopal Church.