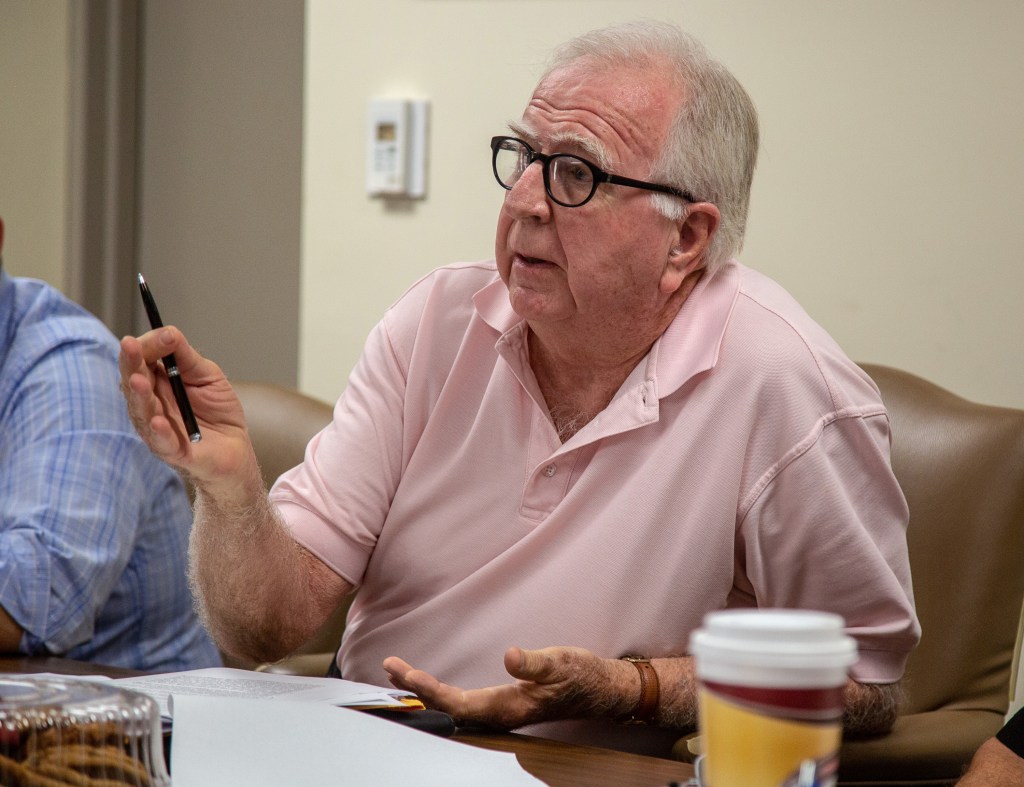 Boyle County Magistrate John Caywood said during this week's fiscal court meeting that the county needs to examine where it can get more revenue from. (Photo by Ben Kleppinger)

Could a payroll tax increase be on the horizon for Boyle County? According to recent comments by county officials, it’s at least something they plan to discuss.

Two factors appear to be pushing magistrates toward a discussion of an increase:

• mounting expenses for county government, including the looming possibility of a new jail that could cost more than $30 million to build; and

• the strong likelihood that Boyle County could lose the ability to raise its payroll tax rate after the 2020 Census is certified.

“I hear some of us say we need more revenue to help solve some of the issues that we have,” Magistrate John Caywood said Tuesday. “But what I’m not hearing is where that’s being discussed and where that’s going to start.”

“I would like that to at least be a part of the discussion of increased revenue stream development,” Hunt said. “It’s a good place to start but it will have to take a much broader picture than that.”

Hunt said a substantial discussion in the Finance Committee could “start the ball rolling on something like that.”

Magistrate Jason Cullen said county officials should also be looking for cost savings, not just possible tax increases. He pointed to the county’s recent move to switch health insurance brokers, which he said is slightly more expensive on the front end but “on the back end, we’re going to save a lot of money.”

“Magistrate Caywood hit the nail right on the head about our revenue,” Magistrate Phil Sammons said. “We need to really be thinking — and I’d like the Finance Committee to be thinking about this — on the payroll tax. I don’t know if you’re aware or not but once this county goes over 30,000 (people), you don’t ever get another chance to increase the payroll tax.

“I’m not for taxing — don’t get me wrong. But … we really need to be thinking about the amount, because we’re going to have to increase it. Let’s face it. It’s just like death — we’re all going to die, but taxes is the same thing. We’re going to have to do something with these taxes or you can forget it.”

Magistrate Jamey Gay said a payroll tax increase is “something that definitely has to be incorporated in that conversation and discussion.”

A Kentucky law that only affects counties with 30,000 or more people has the potential to essentially cap Boyle County’s payroll tax revenue from Danville residents — or even zero it out entirely.

That law allows for payroll taxes paid to a city to be credited against the payroll taxes owed to a county government, according to information provided by Chris Johnson with the Kentucky League of Cities.

Boyle County would be exempt from crediting back the tax as long as its current rate of 7.5 cents per $10 earned remained the same. But Depending on how the law is interpreted, it could mean Boyle would lose part or all of its payroll tax revenues from workers in Danville if it ever raised its payroll tax after reaching an official population of 30,000.

Boyle County had a population of 28,432 in 2010, according to the 2010 Census. Its estimated 2015 population was 29,807 and its 2016 estimated population was 30,018. If the 2020 Census counts at least 30,000 in Boyle County, the law would kick into effect when the Census is certified, meaning until then Boyle can still raise its payroll tax without losing the additional revenues later.