Boyle prevails in battle of unbeatens 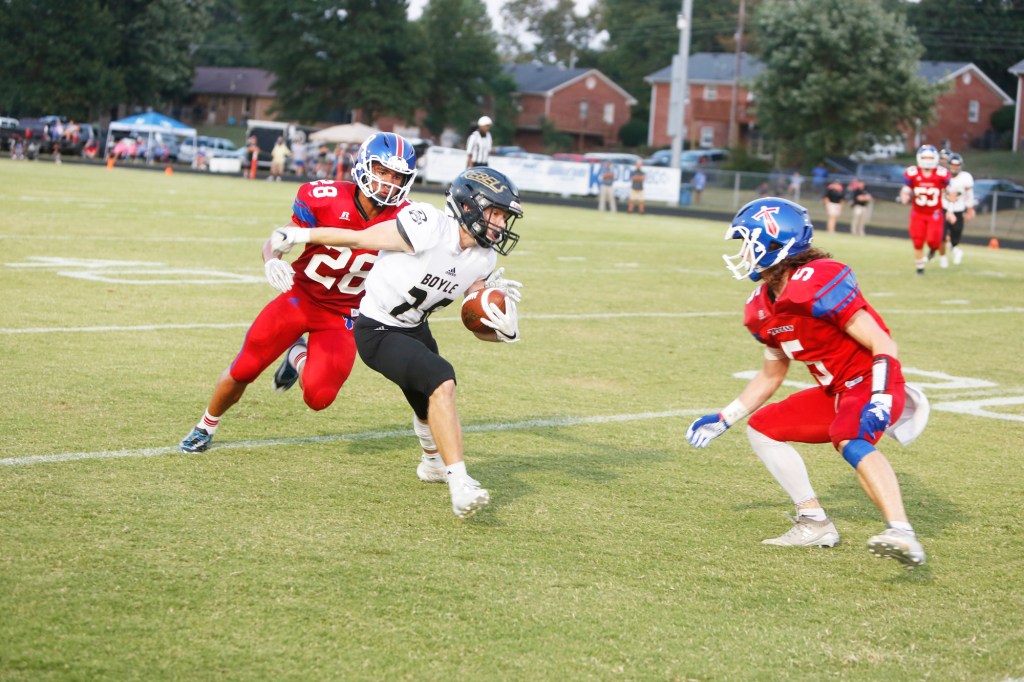 Cameron Yates of Boyle County looks for a path between Mercer County defenders Brayden Dunn (28) and Lane Horn (5) after catching a pass during the first quarter of Boyle’s 43-7 victory Friday. Yates gained 15 yards on the play. (Photo Mike Marsee)

HARRODSBURG – This was not Boyle County’s largest win of the young season, but it might have been the Rebels’ most important.

Boyle got off to another fast start Friday night at Mercer County, scoring three times in less than nine minutes to end any doubt that it would be the dominant team for the fourth week in a row.

The Rebels went on to win 43-7 against a Mercer team that Boyle coach Chuck Smith said was easily the toughest opponent his team has faced to date, setting the stage for more difficult games that are just around the corner.

It wasn’t until well into the fourth quarter that the running clock rule took effect, but it was in the first quarter that Smith said Boyle played its best football as it won its fourth straight meeting with Mercer– by a combined score of 192-23 – since the Titans’ win over the Rebels in the 2013 postseason. 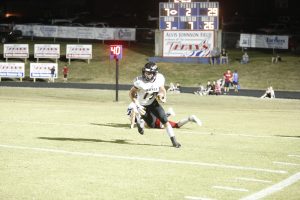 Reese Smith of Boyle County turns upfield after intercepting a pass near the goal line during the second quarter of Boyle’s 43-7 victory Friday. Smith returned the ball 38 yards to start a drive that led to a touchdown. (Photo Mike Marsee)

“I just liked the way we executed. We executed really fast and with perfection,” Smith said. “And defensively I thought we were really physical, we really got after them and stayed after them, really, for the most part.”

Boyle (4-0) compiled 190 of its 372 offensive yards in the first quarter, and the Rebels’ defense held Mercer to 13 yards on three first-quarter possessions.

Smith said the list of reasons for the Rebels’ strong starts starts with the senior class.

“I think it’s got a lot to do with senior leadership,” he said. “We’ve done a great job of preparing for the game mentally, physically in practice, and we come out strong. That’s what we did tonight, and I think that was the key to the game, because if we had let Mercer keep it from us than we would have been in trouble.”

Quarterback Reed Lanter led the way on offense, completing nine of 10 first-quarter passes for 140 yards and two touchdowns: a 10-yard throw to Reese Smith on the opening drive and an 18-yard throw to younger brother Cole Lanter late in the period.

On the other side of the ball, Mercer (3-1) lost 1 yard on its first series, gained 2 yards on its second and broke even on its third.

“I’m not disappointed in ouir effort, I’m just disappointed that we didn’t perform better when it mattered most,” Mercer coach David Buchanan said. “I’d like for us to have played better early, but give them credit: They’re a really good team, and that had a lot to do with it.”

Mercer did have some moments of momentum early in the second quarter. First, the Titans stopped Boyle’s offense for the first time, forcing a turnover on downs at the Mercer 46-yard line. Then, they burned the Rebels with a halfback pass play when Dillon Warren threw a bomb to Jamisen Lewis for a 51-yard touchdown.

“We wanted to run (the play) in the first game and we couldn’t execute it, so we’ve been running it and running it,” Buchanan said. “We thought we had a shot at it, and it lined up for us, and thank goodness because it gave us a little bit of hope and a little bit of life.”

Not for long, however. Boyle’s Gray Rahbany returned the ensuing kickoff 70 yards for a touchdown that made it 29-7 and made it clear which team would have its way. 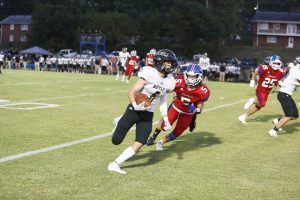 “Giving up the kickoff return for a touchdown was a killer. At that point, it’s going to be tough, but we might be able to get back into the ballgame right there, and then letting them run it back got us,” Buchanan said.

Landen Bartleson’s second rushing touchdown of the game gave Boyle a 36-7 lead in the closing seconds of the first half, and Will McDaniel capped the scoring with a 4-yard TD run in the fourth quarter.

Most of the Rebels’ 128 rushing yards were nearly equally distributed among four players, with Andrew Sacco leading the way with 30 yards on seven carries. Cole Lanter led Boyle’s receiving corps with six catches for 79 yards, while Smith had five for 93 yards and Cameron Yates had four for 49.

Mercer’s 172 yards were just 29 yards short of the combined total for Boyle’s first three opponents. Quarterback Kaelin Drakeford led the Titans in rushing with 33 yards on six carries, and he completed six of 12 passes for 43 yards, with Warren catching five of them for 38 yards.

Smith said there was no question that Mercer was the toughest opponent Boyle has faced to date.

“Dave’s got a really nice football team,” he said. “I think they’re really solid, and I think they can make some noise by the end of the year.”

Boyle’s schedule takes a definite turn here, however. The Rebels’ next three games are against three of the top teams in their respective classes: Louisville Christian Academy (3A), Highlands (5A) and Lexington Catholic (4A).

Smith said the Rebels are about where they should be as they enter the three-game gauntlet.

Meanwhile, Buchanan said Mercer must be on guard in its next game against Garrard County.

“Garrard County’s going to watch this tape and they’re going to be chomping at the bit to kick our tails next week. We’d better be ready to go,” he said.