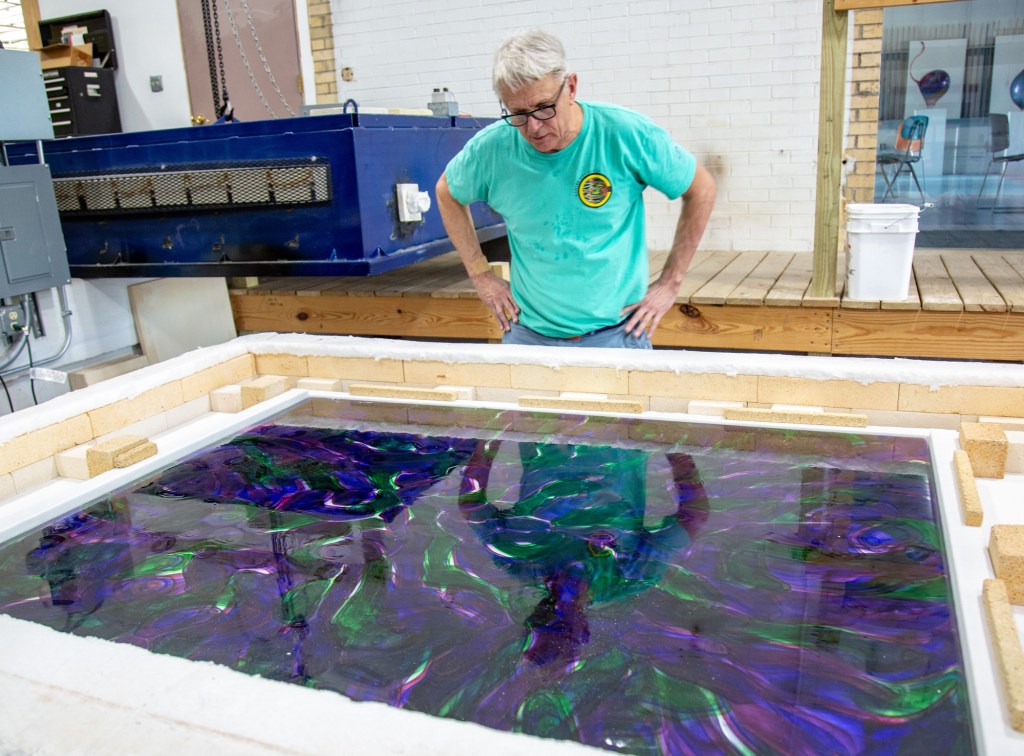 Stephen Powell examines a glass panel he was turning into a piece of art called a zoomer in December 2018. (FIle photo by Ben Kleppinger)

A “Celebration of Life” service will be held for the late Stephen Rolfe Powell, world-renowned glass artist and H.W. Stodghill, Jr. and Adele H. Stodghill professor of art, in Newlin Hall of Centre College’s Norton Center for the Arts on Saturday, Sept. 21 at 2 p.m. The service, which is open to the public and will also be streamed live on Centre’s website, will be followed by a light reception in the foyer.

“People shouldn’t expect a normal memorial service,” said Mark Lucas, Alfred P. and Katherine B. Jobson professor of English. “The event will be a multimedia celebration of Steve’s life and art — with an emphasis on the kind of verve and color he brought to everything he did.” 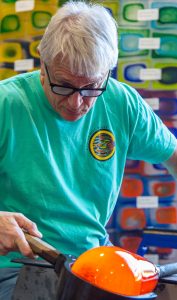 In addition to guest speakers, Powell’s sister Pamela Powell has produced a video containing excerpts from interviews she has conducted with several friends and family members that will be played during the event. Lucas and Mitzi Elliott, Powell’s longtime business manager, also soundtracked some of the best slides of Powell’s work with music that he loved and often played during work sessions.

“Among Centre alumni offering favorite memories will be three of the many Powell students and crew-members who’ve gone on to large success — Brook White, Alysia Fischer, and Che’ Rhodes,” Lucas said. “Powell’s classmate Tom Hagerman will also be on hand to speak.”

Following the service and reception in the Norton Center foyer, a Stephen Rolfe Powell Memorial Walking Tour will be offered for anyone who would like to view Powell’s pieces on display in the community.

Among sites on the tour will be an exhibit in the AEGON Gallery at the College’s Jones Visual Art Center, which will be open that day from 9 a.m. to 6 p.m. A color brochure of the show will be available for visitors to take with them.

The AEGON exhibit will run from Friday, Sept. 20 to Wednesday, Oct. 16.

Danville’s Art Center of the Bluegrass and the Boyle County Public Library, both of which will feature Powell’s work, will also be open to the public following the service.

Newlin Hall, Norton Center for the Arts at Centre College

Satellite campus locations, which will offer a livestream of the service, will be available in the College Campus Center, Vahlkamp Theater (Crounse Hall) and the Norton Center for the Arts lobby. The Centre website will also provide a livestream of the event for those unable to attend.

Event parking will be offered at the Norton Center for the Arts. Additional parking will be available at Boles Natatorium, The Presbyterian Church of Danville and the city parking garage (accessible from Walnut St. or S. 3rd St.).