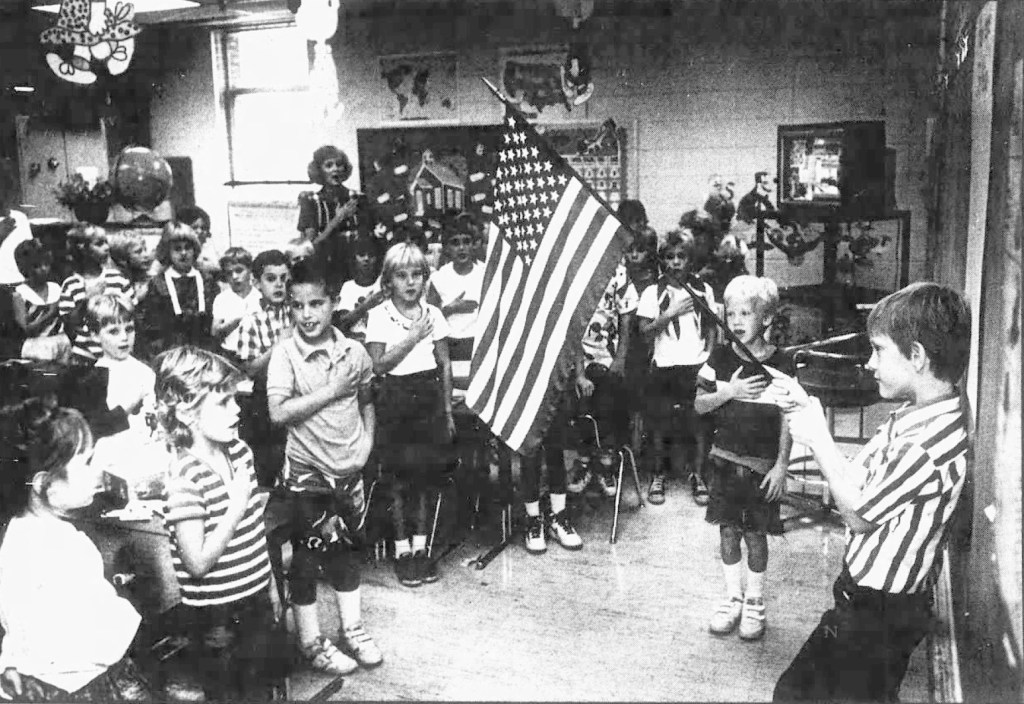 The Woodlawn Elementary second-grade classes of Denise Rall and Kitty Marston recite the Pledge of Allegiance in celebration of the U.S. Constitution's bicentennial on Sept. 17, 1987. Student Michael Tyler, at far right, holds the flag. (File photo by Daniel Price)

Second-graders at Woodlawn Elementary School made it on the front page of The Advocate-Messenger on this day in 1987.

The classes of Denise Rall and Kitty Marston celebrated the 200th anniversary of the signing of the U.S. Constitution by reciting the Pledge of Allegiance while one student, Michael Tyler, held the flag.

One student “asked his teacher if President Reagan was going to come to his class” for the Constitution’s big 2-0-0, according to cutline with the photo by Daniel Price.

The newspaper filled the whole top half of A1 with the photo and a story about the nation celebrating the anniversary.

“The Constitution … is 200 years old today and President Reagan helped its hometown kick off a bell-ringing, flag-waving, star-spangled bicentennial birthday party,” the report reads. “In a speech at Independence Hall, Reagan acclaimed the framing of the Constitution 200 years ago as a milestone ‘that would profoundly and forever alter not just these United States but the world.'”

Other events scheduled to celebrate the bicentennial included the laying of a wreath at the Tomb of the Unknown Revolutionary War Hero near Independence Hall; a “four-day picnic along the Delaware River for about 1 million people;” a ringing of the Centennial Bell by former U.S. Chief Justice Warren Burger; a 30-minute fireworks display; a black-tie gala; and 214 new Americans from 41 countries who were scheduled to take the oath of citizenship during a baseball game between the Philadelphia Phillies and the Chicago Cubs.

“Before, I felt like I didn’t have a country or a nationality,” said Suong Dang, a Vietnamese refugee who was among those new citizens. “I was a nobody. Now, I’m an American.”

Other front-page news on this day 32 years ago included:

• A report from Advocate-Messenger reporter Herb Brock detailed complaints from three local residents that the executive director of the board of the Danville Urban Renewal and Community Development Agency had tried to keep them from buying lots in the Fairview-Cowan Street area because they were black.

• An Associated Press report on “Democratic presidential hopeful Joseph Biden” admitting he had committed plagiarism in his first year in law school, but claiming a controversy over his failure to credit others for parts of his campaign speeches” was “frankly ludicrous.”