Sister Cities hands award over to City of Danville 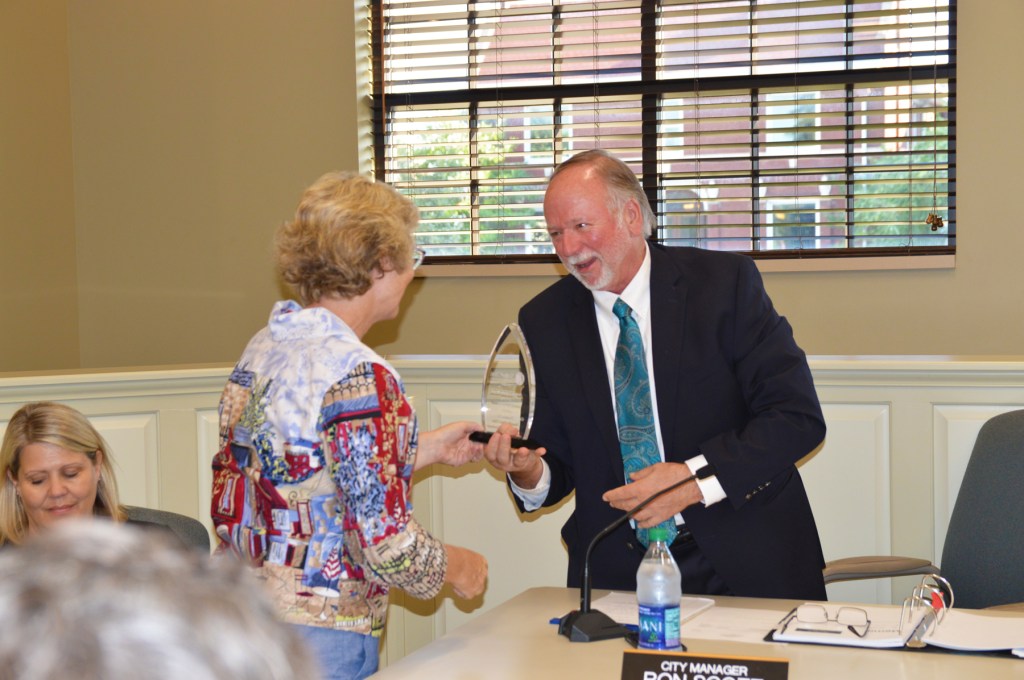 Danville Sister Cities (DSC) presented its 2019 Innovation Award for Arts and Culture it received from the international organization to the City of Danville last week during the commission meeting. Milton Reigelman with DSC said the national organization has 500 chapters in the U.S. and 2,500 abroad.

“And they give one award each year to a city under 25,000. We applied and forgot about it, then got a call that we had won.” 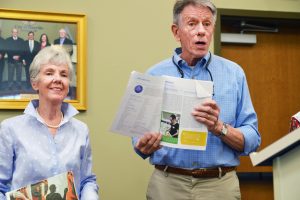 Reigelman called Mary Jo Bowling and Mary Beth Touchstone to stand with him at the podium, the members of Sister Cities he called the real stars of the situation. He explained the award was based on a number of arts-related initiatives with DSC, including events at West T. Hill Community Theatre and Pioneer Playhouse, but said it was “mostly the Diversitea mural, they thought was innovative for arts and culture,” referring to the depiction on the side of Elmwood Inn Fine Teas that Northern Ireland exchange artist Dee Craig enlisted the help of students to create.

Reigelman showed a book published annually by the national Sister Cities organization, with a picture of Brandon Long (creative director of the Art Center of the Bluegrass) while on his cultural exchange trip to Carrickfergus, Northern Ireland, and a picture of the Diversitea mural.

“We want to give to the city the award …” Reigelman said about the arts and culture award.

“And I want to thank these two ladies, who I learned a lot from on how you move and shake …” he said, about Bowling and Touchstone.

“I should say (Danville Sister Cities) was established in 1989 by a man — Mayor John Bowling,” Reigelman said. Former Mayor Bowling was in the crowd in support of his wife.

Guerrant gave an update of services provided over the last year (from July 2018-June 2019) at the center, which included: 11,957 meals delivered to homebound senior citizens; 4,687 meals were served on site at the center; 9,309 rides were provided; an average of 775 rides a month, operating 8 a.m.-2 p.m. on weekdays; amassed 1,000 hours of volunteer time to help offset program costs; served 236 individuals in activities (who signed in), which equates to 3,410 on average; and provided 25,341 hours of activities for senior citizens.

In addition to what’s offered to seniors, A Gathering Place also has an adult day health care program, operating five days a week to provide services to special-needs adults ages 21 and older in this county.

“As that program continues to succeed, we’re seeing greater numbers there as well,” Guerrant said. In the last fiscal year, ending in June, the adult day health care averaged 8,172 meals. 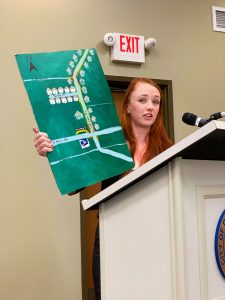 Chelsea Edwards came with a picture she painted of her Terrace Court neighborhood. She and her husband spoke to the Danville City Commission last week about speeding trucks in the area, and the safety concerns residents there have. (photo by Bobbie Curd)

During the “hear the public” segment of the meeting, Chelsea and Joshua Edwards spoke to the commission about issues they have with safety on Terrace Court, where they live. Chelsea Edwards appeared with a picture she painted of her neighborhood, and said many who live on the road only have one spot for parking, and some have none.

She said the traffic coming off of Wilderness Road is nothing short of dangerous, with multiple dump trucks and large semis that “plow through” the area at all hours of the night.

“It’s not safe. My neighbor — he’s lived in that house for 20 years, and said he’s had seven different vehicles that have been totaled,” she said. Most of the dangerous traffic consists of big trucks, but many others travel through the area at a high rate of speed, she said.

When her husband has to work on their vehicle, which must be parked on the side of the road, she said they began placing traffic cones around it due to being worried about his safety. Chelsea Edwards said they decided to do this after contacting “different agencies to do something about it, but no luck. We had to put cones out to keep him safe,” but were told Monday morning by Codes Enforcement they cannot legally keep the cones out.

“They did tell us about this meeting, but our neighbors weren’t able to attend. We don’t know how to enact change, hopefully we can just be heard on this.”

Joshua Edwards also spoke, and said the area is dangerous with the blow-back from semi trucks coming through, and it’s easy to travel through the area and see bent street signs and light poles that trucks have hit, as well as trash cans that have been run over.

Mayor Perros invited the couple to set up a meeting with city staff to discuss the problem in more detail.

• unanimously approved a banner request to promote the CASA Superhero 5k, a benefit for Casa of the Bluegrass, which covers Boyle, Mercer, Franklin and Anderson counties. The race will be held Oct. 12 at Millennium Park and includes a kids fun run and adults 5K. Kyle Huffman with CASA of the Bluegrass said this is the first time the race will be held in Danville. Visit casaofthebluegrass.org to sign up.