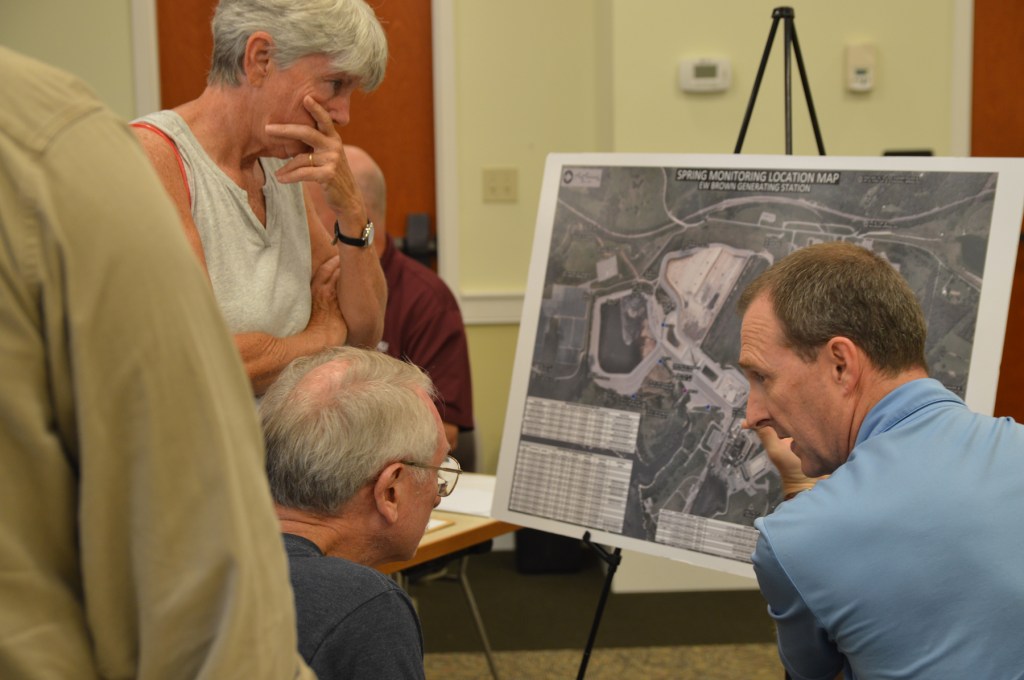 Julie Pease and Jim Porter, members of the Wilderness Trace Chapter of Kentuckians for the Commonwealth, talk to a representative from Kentucky Utilities during last week’s “informational meeting” held in Harrodsburg. (Photo by Bobbie Curd)

Last week, an informational meeting was held at the Mercer County Public Library by Kentucky Utilities as part of the requirements in the Disposal of Coal Combustion Residuals (CCR) rule, set in place by the federal government in 2015.

A press release about the event was sent to a Harrodsburg newspaper, but not to The Advocate-Messenger; Pratt said this was due to the meeting being offered in Harrodsburg. Herrington Lake runs through Mercer, Boyle and Garrard counties. The Dix River-Herrington Lake watershed supplies the drinking water for the municipal systems in Danville and Lancaster.

Many came to ask questions about what KU plans to do with the current pollution that has already made it into the lake through groundwater. In 2017, Earthjustice, along with the Kentucky Waterways Alliance and Sierra Club, filed suit against the company, demanding cleanup of pollution coming from coal ash waste containing selenium and other poisons.

Many area residents have asked KU and the Kentucky Energy and Environment Cabinet to offer a community meeting, explaining what has been done so far to monitor the pollution and rectify the issue; both have refused.

Pratt said these community informational meetings about the CCR rule are simply a way for KU to get out among its customers and communities to inform them of what the company has done so far, and how it’s being done. “As we talk about what we’re doing to comply with the CCR rule, we wanted to share projects so people can see first-hand overviews of … where we are today.”

She said, “When these CCR rules set these tightened standards as part of the compliance timeline, utilities have been doing the groundwater monitoring and assessment.” She said if certain metals “exceeded the tightened standards, then plants looked to see what’s naturally occuring in the area, if there’s other potential sources. If there are levels above those tightened standards established by the rule, then our next step is to share with the public what we call the corrective action measures.”

KU representatives were situated at stations to discuss their particular topics with those who came. There was a “history of the lake” table, which explained how the lake is owned and operated by KU.

Another table provided an overview of E.W. Brown, explaining the different types of generating it offers — solar, hydroelectric, coal-fired and natural gas power. It included actual coal materials and explanations of what they can be used for.

Another table provided info on the regulatory side of how KU is complying, which included information from the “Ramboll study;” and a table showing examples of what the materials look like that KU is using to line, fill and cover its wet impoundments.

Sam Carr, a Harrodsburg resident and KU employee, had examples of coal combustion residuals — fly ash, bottom ash and gypsum are some of the materials leftover after burning coal.

“Something that people may not know is that CCR materials are actually recycled,” Pratt said. They are used for things like wall board, fertilizer and even mixed in with concrete. The Abraham Lincoln Bridge in downtown Louisville was actually built using cement made from fly ash coming from the Mill Creek plant, she said.

“Really, we got ahead of the curve decades ago,” she said. “Well before the CCR rule became final, we had plans in place to move to dry management at our facilities. We have a landfill at E.W. Brown, so now across our power plant fleet, the closure plans are underway … at various stages.” The company is in the process of its plans to eliminate coal ash ponds and wet storage impoundments in all its active and retired plants, she said.

KU was fined years ago through the state, and more discolored ground water making its way down to Curds Inlet was found on a follow-up inspection, along with very high levels of selenium detected in fish, which led to the 2017 lawsuit. In the suit, a fishery biologist showed examples of fish deformities in the area.

The Energy and Environment Cabinet, as part of the corrective action plan, allowed KU to handle its own follow-up monitoring and testing. The company enlisted Ramboll, a consulting firm, to do the work. The Ramboll study said in Curd’s Inlet, and several other areas away from E.W. Brown, some juvenile bluegill were observed to have enlarged eyes, but it “found no conclusive evidence” to pinpoint the cause of the condition. Ramboll concluded there is “no significant impact,” and so far there are no further remediation plans to clean up what’s in the lake.

The CCR rule was enacted after an extensive study on the effects of coal ash on the environment and public health. It establishes technical requirements for CCR landfills, including addressing the risks from coal ash disposal, including the leaking of contaminants into groundwater, blowing of contaminants into the air as dust, and the “catastrophic failure of coal ash surface impoundments,” according to the Environmental Protection Agency.

“Additionally, the rule sets out recordkeeping and reporting requirements, as well as the requirement for each facility to establish and post specific information to a publicly-accessible website,” the EPA says.

Results from groundwater monitoring and corrective actions plans for E.W. Brown’s auxiliary pond and landfill, as well as monitoring reports for the general station can be found at lge-ku.com, by going under the “The Environment” tab.

Pratt said if at any point during the groundwater monitoring, “the resolves were above the CCR rule limits, that is one we’d mark and say, ‘OK, this is what we’re evaluating, and this is what is being considered as part of the corrective measures.’ In part, that’s our capping and closing our ponds.”

Julie Pease, who lives on the lake and has been involved with the suit against KU, was not satisfied with the meeting.

“How does this really ‘inform’ the public or address concerns?” she asked, in a letter to the editor about the meeting. Pease said she and others only found out about the meeting through a contact with the Herrington Lake Conservation League.

Pease acknowledged that KU has done work to prevent further pollution, but she’s concerned about what’s already in the water.

“If KU is proud of their efforts and confident in the Ramboll report, why not hold a public meeting, in the traditional sense, present their information and allow the public to ask questions?” she asked.

To access the CCR Rule compliance data, including results from Kentucky Utilities’ groundwater monitoring testing and the corrective actions being considered, visit