One Day: ‘Voice of Danville football’ has a blast calling the plays 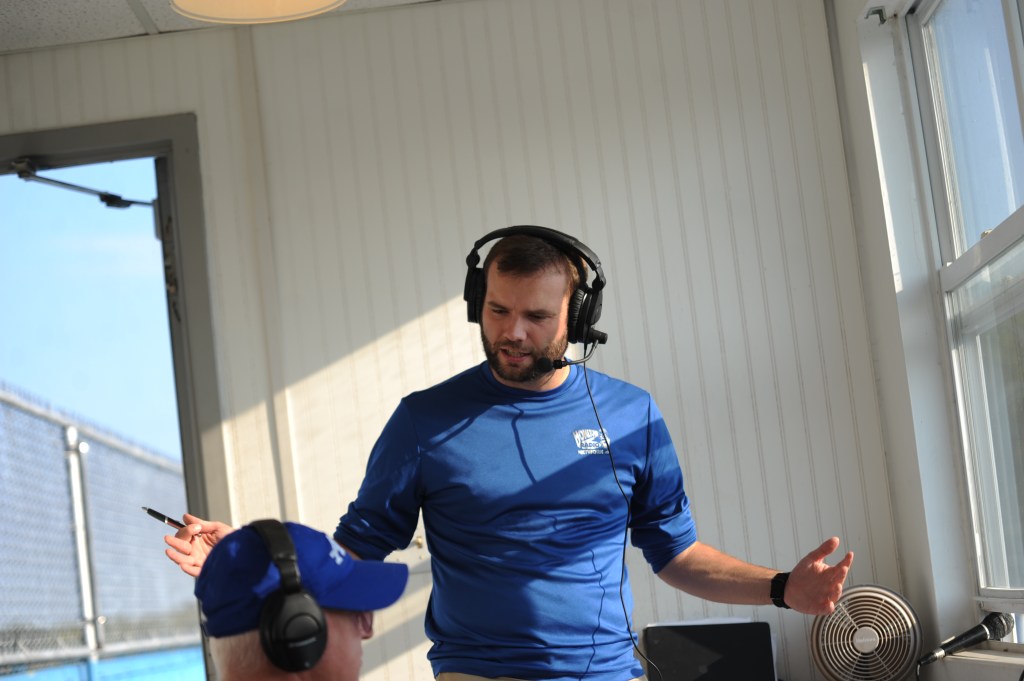 Joe Mathis hosts the Zaxby’s Pregame every Friday before the night’s action. (Photo by Derek Brightwell)

Every Friday night, high-school student-athletes put on pads, cleats and helmets to step out under the lights in front of cheering fans for a taste of the dream. For some, it’s the first step on a journey that will let them live out the fantasies they played out in their backyards. For some, it’s already playing out those fantasies. But above the field, in the press box, one Danville kid is already living his dream.

Joe Mathis always knew he wanted to be calling games, even when he was a kid. At an age when most kids imitated their sports heroes in their yards — which Mathis certainly also did — he could be found in his living room with the TV on mute, imitating his other sports hero.

“I’ve always been a huge Atlanta Braves fan and I would sit there, watch every game as a kid on TBS and listen to Skip Caray — the late Braves television play-by-play announcer,” Mathis said. “He was the first announcer that I really remember looking up to. I loved playing video games, too. So when I would play I would put the games on mute and announce them as I played them. As I got older, I’d do the same thing with games I was watching — just put them on mute and go at it. 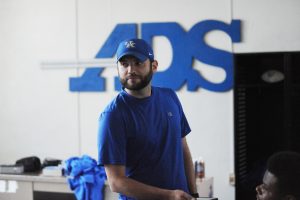 Every Thursday during football season, Mathis interviews members of the Danville coaching staff as well as two players from the team. (Photo by Derek Brightwell)

“My dream was always to be the ‘Voice of the Atlanta Braves,’ but as I got older, I realized that working in the hometown I grew up in and announcing for the teams that I played for and against in high school was a pretty sweet gig as well.”

Since 2016, Mathis has been doing that “pretty sweet gig,” but he’s been involved with the Hometown Radio Network since 2012, after he graduated from Western Kentucky University with a broadcast journalism degree in 2011.

For Mathis, doing play-by-play for a baseball game or football game doesn’t feel like a job.

The long days — his Fridays run from 5:30 a.m. and can run past midnight if a football game goes long — can be tough, especially with two young children — Jack and Raylee — at home. Mathis says that it makes it hard to balance work and family, but that his wife, Rebecca, makes it all work.

“I am lucky to have a wife at home who knows how much I love what I do and supports what I do. She is just awesome at being supportive and taking care of the kids while I’m gone,” he said. “My mom is always willing to help her out with the kids too. I am very, very blessed to have them in my life.”

“Like I said about how there are many behind-the-scenes people that make our Friday night broadcasts work, the most important behind the scenes person is my wife,” he added. “She works a full-time job as well, so I know there are times she’s worn out but she never, ever complains.”

Mathis knows what goes into getting a broadcast on the air without a hitch. Before he was the “Voice of Danville Football,” he was doing some of those jobs. Of all the things that he says people don’t know about what’s going on in the booth, the biggest “would probably be just the number of moving parts that have to work for a broadcast to go on.

“We are a smaller operation but on Friday nights, we are all systems go. Each game has its own set of commercials, it’s own broadcasters, it’s own equipment and it’s own board operators. I think a lot of people may see the play-by-play and color commentator and think that we are the only two and that’s far from true. We are just two very small pieces of a big Friday-night operation. Without our general manager, Robert (Wagner) believing that we can do it, then we can’t broadcast a game. Without our operations manager (Jim Parmon) putting the commercials in the computer, we can’t broadcast the game. Without the board operator playing the commercials we can’t broadcast the game — and yes, without the announcers there wouldn’t be a broadcast, but everyone plays a very important part in what our stations are able to do when it comes to broadcasting sports.”

In addition to Danville football games, Mathis gets to live out that boyhood dream of calling baseball games — but it almost didn’t work out that way. A confluence of events in 2011 during his second internship led to him calling baseball games in the state tournament. And a run of deep playoff baseball and softball runs have allowed him to continue “living the dream of calling area baseball.” He’s called five different start tournaments over the last eight years — including Boyle County softball’s trip this summer.

“Without Mercer County making state (In 2011), I may have never called a high-school baseball game. I am also very grateful to Boyle County baseball. They won region back to back years and made the state tournament two years in a row.”

Ultimately, the thing Mathis is most proud of is being able to highlight the student athletes of all the area schools that he calls games for.

“This area has phenomenal athletes. I’m just glad to be a very small part in getting the word out about them … they all are very deserving of the recognition they get, regardless of the sport.”