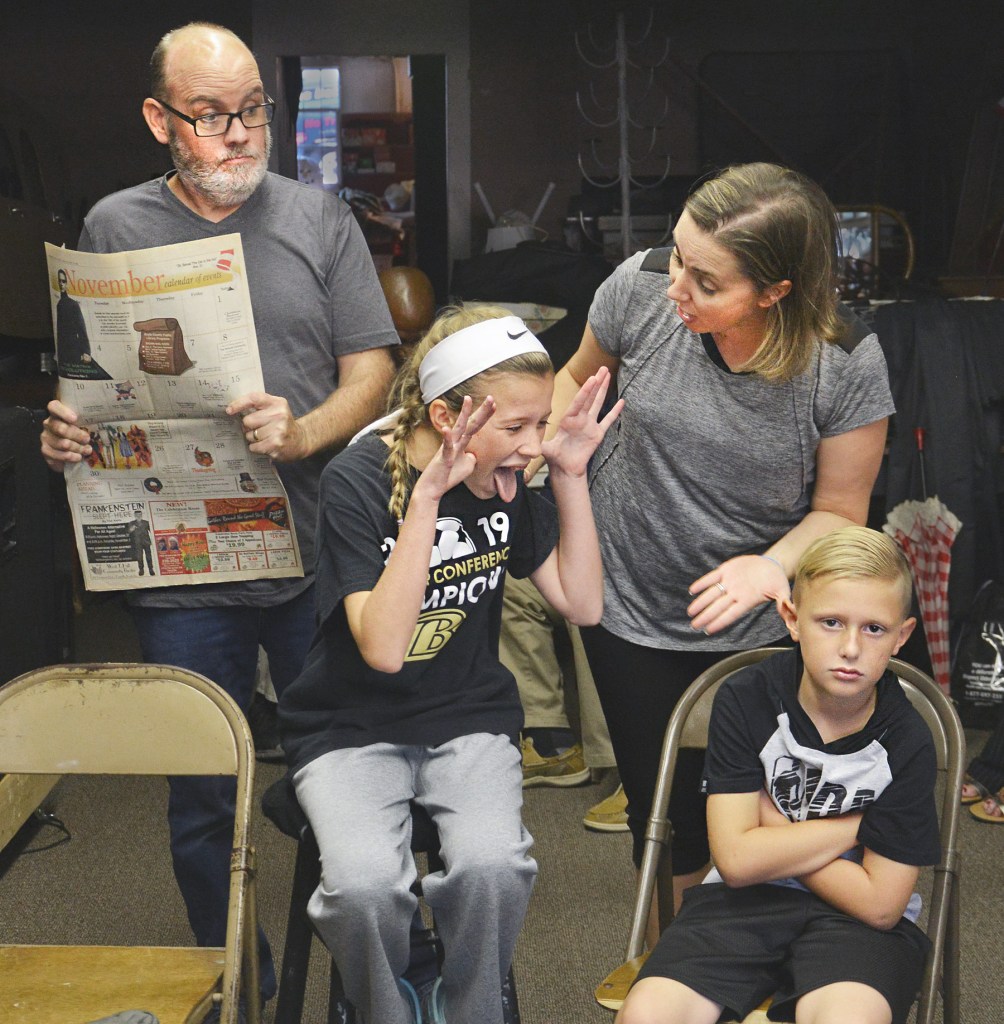 Six winning plays, and one that received an honorable mention, will be performed Sept. 20-22 at West T. Hill Community Theatre, a result of the 10-minute playwriting contest the theater was able to offer again.

“We’ve done three of these contests in our 40 years as a theater,” Managing Director Karen Logue says. The last one was about 15 years ago, but the theater was able to offer the writing contest again due to the generosity of a patron who donated funds just for it.

“We had 58 entries from all over the country, some from Canada. It was a good showing,” Logue says. The plays were only numbered — the playwrights were not included — before they were read by five judges. “… So it was as much of a surprise to me to see the local winners.”

Two of Danville, Gigi Biles and Callie Minks, both won a place on the stage. “And William Rayens (of Perryville), he used to act with us. He’s a young man now, goes to Campbellsville (University) in Harrodsburg. Those were the three locals, and that was such a nice surprise.”

Biles says she’s authored a book of short stories and a book of poetry for children, but never a play. She wrote, “The Reunion,” which Logue calls a piece “with a lovely, local flavor to it.”

Logue says the story is about a young man who’s come back for his 25th reunion at Danville High School, he walks into a drugstore where he used to work as a kid. “He meets a young girl at the counter, and as fate would have it, her mother went to DHS. But I can’t give the ending. It’s very interesting, touches on integration and segregation.”

Biles says, “I was a teacher at DHS for years and years, and I just watched the kids. It kind of rang a bell with me.” She also started acting under the late West Hill.

“So I felt like I knew what plays were about.” Biles says she’s using her prize money won from the competition to take a large group of her family to the show next Sunday.

“Going Home,” by Rayens, Logue says, is a story about a homeless immigrant and a teenaged boy who befriends him, and checks in on him often. “There’s an incredible twist at the end …”

This was also Rayens first attempt at such a competition. He remembers the earlier go-around, 15 or so years ago. “I heard about it, and I told myself I would have one of my stories produced.”

The inspiration behind his piece is a story told to him by a friend. “When Ruben was sitting outside a gas station early one morning, after working all night, he was drinking his cup of coffee. As he sat by the curb, tourists walked by and proceeded to drop change into the open cup. He laughed to himself and said, ‘Only in America do people drop money into coffee.’”

The seven plays will be performed by an ensemble cast of about 20 actors, with some of them playing a few different roles. Tickets may be purchased online, and Logue warns —  they had to turn people away at the door last time.

Logue also mentions “Alexa,” written by Minks, and says it’s “about the best-written short play I’ve ever read. It’s humorous, very timely and the language and dialogue is great.”

In Minks’ play, Alexa is actually a real person who sits in a corner of an office with a headset, but things get interesting when the little boy in the family asks her if he’s weird. “She knows she’s not supposed to get personally involved, but ….” Logue says.

Minks says this is the first time she’s entered a playwriting contest. The office manager at Pioneer Playhouse says, “I saw the advertisement … and thought to myself, ‘I see a ton of plays at the Playhouse. How hard can it be?’”

Well, Minks says, it’s more difficult than it sounds. “Creating characters that people care about and cramming a story arc into 10 pages isn’t easy.” During a very stressful summer — her family completed a full home renovation, her husband was in a car accident and she was preparing to send her son off to college — she was thinking during a sleepless night about how having an assistant would be helpful.

“I thought ‘Alexa — what if she was a real person?’ I basically wrote the play in my head that night. … I was surprised to have been chosen.”

Minks says that to have an idea, flesh it out, write it down, turn it over for others to put their creative spin on it, who then share it with an audience — “that is incredibly satisfying and exciting. I can’t wait to see it performed!”

The other plays that will be produced include: “You Haven’t Changed a Bit,” by Donna Hoke, of East Amherst, NY; “Back on Top,” by George Loukides of Sarasota, Fla.; and “Dress Blues,” by Donald Loftus of New York, NY.