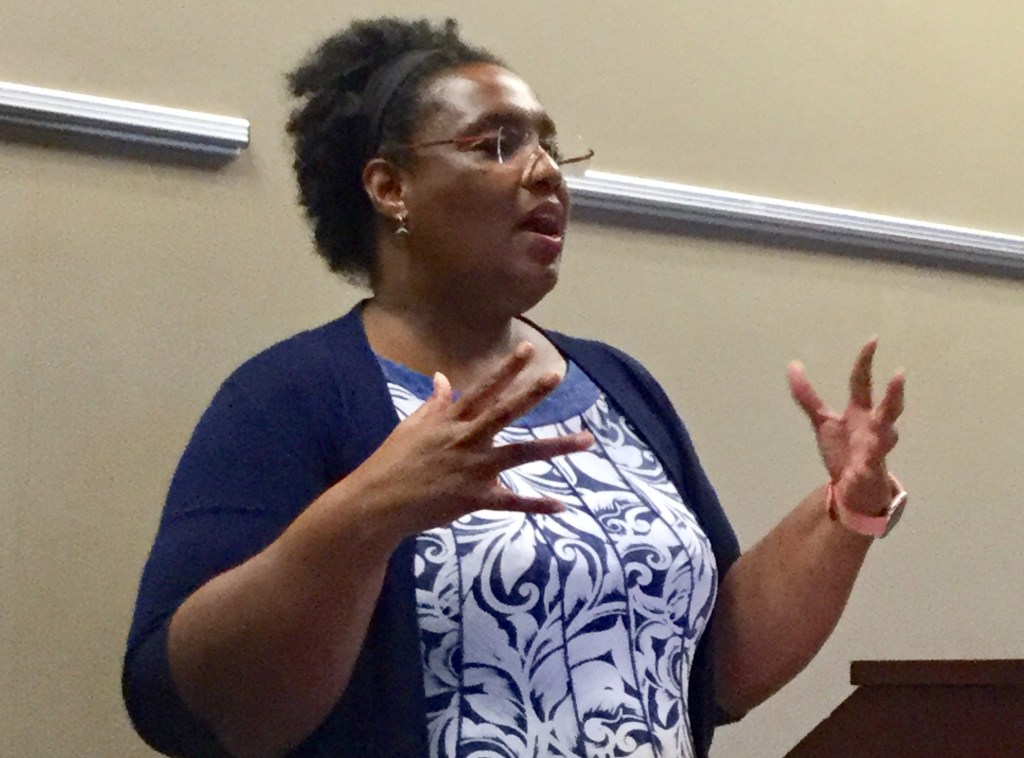 (Photo contributed) Andrea Abrams talks to attendees at a Women's Network of Boyle County meeting last week on the topic of inclusion.

On Sept. 10, Andrea Abrams spoke on “Walking the Talk of Inclusion.”

To a record crowd at an open meeting of the Women’s Network in Danville, she addressed the challenge of America’s diverse and divided communities. She focused on the need to embrace diversity while finding where commonalities intersect.

Abrams started by defining diversity as the range of human differences, including but not limited to race, social background, gender, sexual orientation, age, physical and learning ability, religion, national origin and citizenship status. In fact, each of us has many parts to our identity, or many identities.

Inclusion as a goal means involving and empowering others, where the inherent worth and dignity of all people are recognized. Making others feel welcome and safe, not assuming but asking what is wanted, having a give and take, taking other voices seriously — all are necessary for inclusion.

The challenge is to talk, listen and learn from each other before stereotyping, before identifying enemies through fear or anger at differences. Prejudices can be outwardly visible or undercover. Abrams suggested the audience react internally to a series of labeled types to illustrate that we all have prejudices, some not even clear to ourselves. She urged us to have an internal debate concerning our assumptions about diverse groups, as well as to search for common values and needs, acknowledging our shared humanity.

Inclusion, a full and equal participation of people of all groups, is necessary to a society that aspires to individual freedom and to meeting the needs of all. When the goal is social justice, each person needs a sense of their own value, agency and responsibility. However, social differences interact with systems of domination and subordination, because power is not equally distributed. Racism illustrates this.

Racism, as Abrams defined it, is a system of advantage based on race, with prejudice plus the power to enforce it. Overt racism is intentional, while covert racism is hidden and often disguised with language to downplay discrimination. There are many ways people try to justify racism from asserting the natural superiority of the white race to suggesting that racism no longer has adverse effects.

Abrams concluded by introducing the concept of intellectual empathy — that is, using our brains to imaginatively reconstruct the viewpoints and reasoning of others, to reason from premises, assumptions and ideas other than our own. Such empathy takes practice. Someone asked Abrams for a model of someone with intellectual empathy. She cited her younger sister Stacey, whose skill at connecting with diverse groups brought her very close to the governorship of Georgia.

Andrea Abrams is a professor of anthropology, a vice president for diversity and special assistant to the president of Centre College. She describes herself as growing up poor and black in Mississippi. She graduated from Agnes Scott and earned a master’s and Ph.D. from Emory University in Georgia.

Margaret Gardiner is chair of The Women’s Network in Boyle County.