Boyle businesses want to sell alcohol outside of city limits 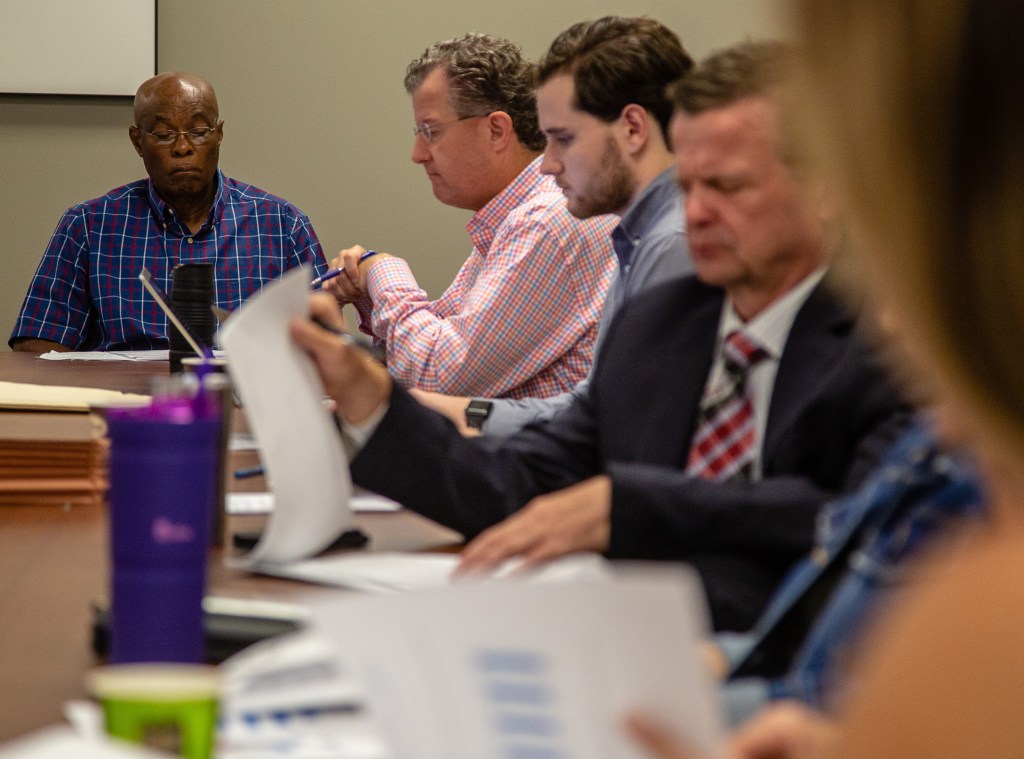 (Photo by Ben Kleppinger) Jody Lassiter, second from left, briefs members of the Economic Development Partnership board on Wednesday morning.

Boyle County businesses located outside of the county’s three cities cannot serve alcohol — something that potentially puts them at a competitive disadvantage with businesses inside city limits, according to Jody Lassiter, president of the local Economic Development Partnership.

Now, economic development leaders are discussing how that “inequity” might be addressed, including the idea of a county-wide local option election that would legalize alcohol sales everywhere.

“We have been contacted by the owners of a restaurant located in the unincorporated area of Boyle County (outside the three cities) with interest in pursuing legalized alcohol sales to help sustain their business,” Lassiter wrote in his report to the EDP executive committee this month. “Previously, we have been approach by owners of convenience stores or vacant properties in the county that wish to legalize sale of beer/malt beverages.”

The EDP reached out to other businesses outside the cities to determine if there was broader interest in legalized alcohol sales.

“We had two wedding/event centers respond that legalized sales would ease the complications of serving/catering alcohol for events at their facilities,” Lassiter wrote. “We are already aware that the ‘dry’ status of the county prohibits distillery/winery development or the construction of aging warehouses on cheaper property located in more rural areas of the county. This is why our distillery development to date has necessitated annexation into a city … or location of suitable farmland already within city limits.”

Lassiter’s report notes a prospective farm winery project seeking annexation into Perryville currently, which could be “difficult given the multiple properties between the city boundary and” the farm.

“All of this indicates that there is a clear competitive disadvantage for current businesses and future business development in the unincorporated areas of the county, particularly given the complexity, effort and uncertainty of annexation, a special precinct election (available for farm wineries) or a countywide referendum,” Lassiter wrote. “Given the successful legalization of alcohol sales in the three cities to date, is it time to consider a countywide referendum to remove this barrier?”

At Wednesday’s EDP board meeting, Lassiter said he is looking into alternatives to a countywide wet/dry vote “to address the inequity of that ability for businesses to locate in the county vs. the cities that are now wet.”

But Lassiter also reviewed some of the history behind the cities going wet. It was the EDP in 2008 that promoted an economic report suggesting “now is the time” for Danville to move from a moist city with restaurants serving alcohol by the drink to a wet city with package liquor sales, he said.

“From there, a group of very active, committed citizens formed a committee, and then carried the campaign forward to an election in March 2010,” he said, noting the EDP’s non-profit status means it cannot lead election campaigns.

The EDP provided similar support from the sidelines for the alcohol vote in Perryville “and to a lesser extent” the vote in Junction City, Lassiter said.

“The same thing could be done for the county, particularly since we’re hearing from convenience stores, wedding and event center venues, to potential farm wineries, a restaurant — all are looking for the opportunity for equity of a competitive stance,” he said. “Of course, they chose to locate in unincorporated areas of the county. But should you be able to compete adequately in the unincorporated areas of the county?”

Lassiter said there are good examples of restaurants being very successful in out-of-the-way rural locations because they can wind up being a “destination” business. Boyle County has one such restaurant already in the Farmhouse in Parksville, he said, before reiterating that the EDP is currently pursuing other options besides a countywide alcohol vote at this time.

“We just want to give them all the tools to sustain so that we can have vibrant restaurants all over the county,” Lassiter said of the businesses that have expressed interest in alcohol sales. “… We just hope we can find options to counsel them in a way to get to their result without a lot of time and effort that would be required by a full local-option election.”

Lassiter noted that state laws about alcohol sales have evolved in recent years — cities no longer run the risk of losing their legalized alcohol sales if a countywide vote is won by dry forces.

“All of the residents of Danville, Junction City and Perryville vote in a countywide election. But if it were to lose, then it would not affect the status of those cities’ previous votes,” Lassiter said. “I’m much more comfortable with that because we actually ran a risk back (when Danville went wet) in 2010 — if we lost the big election, we could reset and O’Charley’s and Applebee’s couldn’t serve alcohol.”