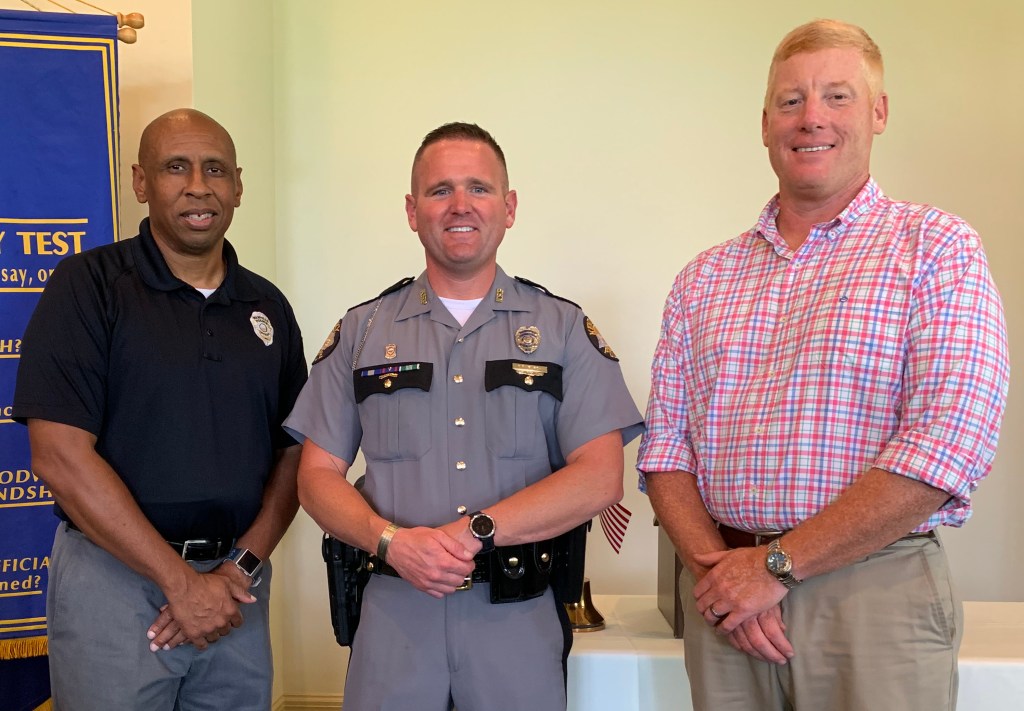 Most Rotarians were surprised at the breadth of KSP’s missions, and even more so with the limited number of troopers that staffed those missions. KSP employs a staff of around 1,600. A little over 800 are sworn officers and approximately 800 are civilians.

KSP was established July 1, 1948, because Kentucky needed a law enforcement agency that wasn’t just writing tickets and stopping cars on state roadways. Kentucky State Police is one of 12 agencies in the United States that’s a full service agency, meaning troopers are not just out stopping cars. Most of the time, those troopers are on their way to answer a service call or conduct an investigation. Kentucky has rural communities that don’t have a very large sheriff’s presence. In many rural communities, KSP is the primary law enforcement agency.

Around 250 sworn troopers are assigned to highway safety; the remaining officers are assigned to a very broad range of law enforcement activities. KSP operates the state’s system of regional crime labs, the KSP Facilities Security Branch, and a specially assigned group are responsible for protecting the governor, lieutenant governor, members of the Kentucky General Assembly and all state property.

The remaining 550 or so officers are posted to jobs in:

When you encounter a state trooper on or off the highway, he could be working on burglaries, robberies or even sexual abuse cases. The state police work on federal task forces with agencies like DEA, FBI, U.S. Marshals and the FDA. Many of KSP’s investigations take them outside of Kentucky into other states or countries.

After providing his preceding overview, Trooper Purdy switched gears to address a number of lesser known KSP services. In 2010, KSP initiated the Cram the Cruiser program to assist needy families. Since then, the agency has contributed nearly 2 million pounds of food to shelters, food banks and churches throughout the commonwealth. The recent ninth annual Kentucky State Police “Cram the Cruiser” food drive raised more than 211 tons (422,662 pounds) of food to help Kentucky families who may be financially strapped during the holiday season.

Every Christmas, about 110 children from troubled backgrounds, ages 4 to 12, are taken shopping for toys. Family resource centers throughout the state identify the candidates.

The Angel Initiative is a program started by the Kentucky State Police in 2016 with one goal: to save lives. The Angel Initiative is a proactive approach offering escape to those battling addiction. Under this initiative, anyone battling addiction can come to any KSP post and get help finding a treatment center. To date, KSP has helped to place 111 individuals who asked for help in treatment.

The Trooper Island Scholarship Fund is an outgrowth of KSP’s summer camp for underprivileged children, which has been in operation for 45 years. On Feb. 1, 2018, the Kentucky State Police started accepting applications from Kentucky high-school seniors who are interested in qualifying for $1,000 scholarships that can be used for education expenses.

Although it is aimed at those who attended Trooper Island Camp as a youngster, the program is open to all graduating seniors.