Emails: Some calling for magistrate, mayor to resign 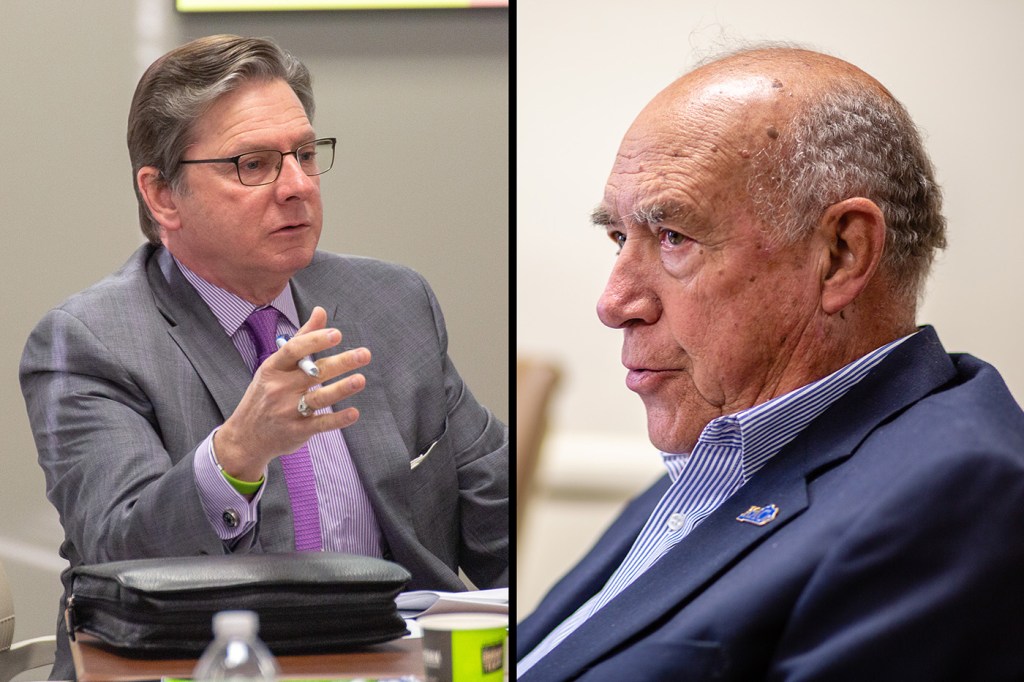 (File photos by Ben Kleppinger) Danville Mayor Mike Perros, left, and Boyle County Magistrate Phil Sammons are facing criticism from some over an incident during the Sept. 10 Boyle County Fiscal Court meeting, when Sammons made a comment about the local tourism director's legs.

Multiple people have requested disciplinary actions against a Boyle County magistrate and Danville’s mayor over comments made concerning the local tourism director’s feet and legs during a public meeting last week.

Perhaps most notably, the chair of the Danville-Boyle County Convention and Visitors Bureau, Brittney Adams, told Hunt that Magistrate Phil Sammons “should be disciplined up to and possibly including asking for his resignation.”

Sammons has been criticized strongly by many in the community for commenting on the appearance of CVB Director Jennifer Kirchner’s legs while she was presenting information about the local transient room tax.

Mayor Perros pointed out to Sammons during the meeting that Kirchner wasn’t wearing socks, because Sammons has repeatedly made fun of Perros for not wearing socks. Sammons made a comment quietly back to Perros, then repeated it for the whole room: “I said, ‘If he had legs like that, he wouldn’t have to wear socks,’” Sammons said, causing multiple people attending the meeting to laugh.

“Listen — I’m a professional woman up here talking about tax rates, not to be objectified about my legs,” Kirchner responded, as laughing continued.

Adams, who leads the board that oversees Kirchner’s work, wrote in her email to Hunt that Kirchner “has done a wonderful job standing up for herself” after Sammons’ comment.

“We could not be more proud of her. However, the (CVB) board feels compelled to address the matter of Magistrate Sammons’ inappropriate comments organization to organization,” Adams wrote in the Sept. 13 email. “… what Magistrate Sammons said in that courtroom is inexcusable and there should be consequences. Further, his effort at an apology to Jennifer indicates his lack of understanding and ability to be a repeat offender in your courtroom.”

“That said, we can all agree that what we want most is for everyone in our community to feel safe, respected and valued when they step into the Boyle County Courthouse,” Adams wrote. “Magistrate Sammons failed to promote that atmosphere on Tuesday through (his) blatant sexual harassment of Jennifer.”

“The CVB board is not writing to demand Magistrate Sammons’ resignation,” Adams email continued. “You will have to decide what discipline is best suited for this egregious behavior in accordance with your policies, your conscious and public opinion. However, the board is in agreement that Magistrate Sammons should be disciplined up to and possibly including asking for his resignation.

“We trust that you will act with the best interest of the county and the citizens of this great county, including the women who routinely come before your court simply asking to be treated as professionals.”

Adams confirmed Wednesday she had not yet received a response from the county to her email.

“I do not know if a response is needed but if you all feel that one is warranted, I would be glad to work with you all to help put it together,” Gay wrote Friday, the same day of Adams’ email. “… The statement was inappropriate under any circumstance and reflects on the entire fiscal court. Sincere public and private apologies have been made. The magistrate that made the statement has been publicly reprimanded by Judge Hunt during his press conference.

“The magistrate has been privately reprimanded by Judge Hunt, as well. Training for the entire fiscal court will occur and will be an ongoing effort.”

Gay concluded his email by noting that while the county’s personnel policy may not apply to elected officials, he believes elected officials should “still follow the policy and be held to an even higher standard.”

Other emails to Hunt

Judge-Executive Hunt was also emailed by Marty Gibson and Ben Nelson, the respective current previous chairs of the Danville-Boyle County Economic Development Partnership Board of Directors.

Gibson emailed a statement, previously provided to The Advocate-Messenger and posted publicly by the EDP, stating that Kirchner should have been “afforded a respectful forum, free from discrimination and harassment” and calling for “meaningful conversations within our community to foster inclusive behavior.”

Nelson’s email was sent on Thursday, two days after the incident. It called for Sammons to be “formally censured/disciplined up to and including termination for his misconduct.”

Nelson stated he was writing “on behalf of many concerned citizens” about what happened.

“As a HR professional who has worked with diverse employers, it is my experience such public inappropriate behavior would typically result in an immediate termination for cause,” Nelson wrote. “… While apologies and sensitivity training are certainly in order, failure to formally censure/discipline Phill will, in our opinion, make Boyle County government as an organization complicit in this unprofessional behavior.”

Nelson said Wednesday there isn’t a specific group of people he represents, but he has talked “with many, many folks who feel there should be some consequences,” so he offered to take on the task of writing to local government.

“It is pretty sad that the county has not ever even acknowledged receipt of my email,” Nelson said.

Nelson also sent an email to Danville City Manager Ron Scott and other Danville officials, using some of the same language contained in his email to the county.

“I am writing on behalf of concerned citizens to suggest Mike Perros should be formally censured/disciplined up to and including termination for his misconduct at Tuesday’s fiscal court meeting,” Nelson wrote.

Emails show Nelson had previously been asking Scott how to “forward an ethics concern” to the city. Scott told Nelson the city’s ethics code is intended to deal with “conflicts in financial matters” but “it has been used in the past to address a mayor’s acting out of the scope of his role.”

Nelson wrote that while the city’s ethics code may not allow “a formal citizens’ charge” in this case, “it does broadly state … each officer and employee has a responsibility to the organization and his colleagues to demonstrate the highest standards of personal integrity, honesty and fortitude in all public activities …”

Scott initially replied to Nelson’s request for formal action against Perros the same day to let him know he would “take this matter up with the city attorney at the first available opportunity.”

“I will suggest, prior to obtaining legal direction on this circumstance, that a key determination in examining this circumstance will be whether the mayor acted in a personal capacity or in an official capacity,” Scott wrote. “That determination will perhaps to a large extent impact what action the city commission may or could determine to take regarding this unfortunate and regrettable event.”

Later that day, Scott received a forwarded email from Perros — it was Nelson’s email to the county calling for action against Sammons.

On Friday, Scott provided a formal response to Nelson, writing: “I understand your email … to be a request that I as city manager act to review the reported actions of Mike Perros in light of the provisions of the city’s ethics code … and also act to review those reported actions of Mike Perros in light of all applicable sections of the city’s personnel policies. Please be advised that as a priority, I will take action to review this matter under both of these city-adopted provisions.”

Scott also provided Nelson with information on how to submit his complaints to the city ethics committee.

Other emails to Danville

Scott also received emails containing EDP Chair Gibson’s statement on the matter, and a draft version of Perros’ letter to the editor apologizing for his participation in what happened.