The Danville-Boyle County Humane Society says its sixth annual Pints for Pets “Pup Crawl” on Saturday will be the biggest celebration yet.

The last five years, the event was held during the evening, when participants bought T-shirts, which are their tickets to food discounts offered in several downtown restaurants. That will not change. Pup Crawlers wearing their T-shirts will get access to specials offered by Gypsy Run Brewery, Bluegrass Pizza & Pub, Tut’s Restaurant, Jane Barleycorn’s Market & Bar, Plank on Main, The Hub Coffee House & Cafe and Captain Frank’s Hotdog Emporium.

But this year, a special daytime cornhole event will go down from 1 to 5 p.m. in Weisiger Park. Live music will be on tap, and The Heart of Danville will be selling beer, wine, water and pop during the tournament. Kid-friendly activities will be available, and dogs are welcome as long as they’re on a leash.

(Submitted photo)
Cornhole boards, designed by volunteer Kristen Scherer, were painted according to sponsors of the tournament for Saturday’s Pints for Pets Pup Crawl, benefitting the Danville-Boyle County Humane Society. The event has expanded this year to include live music, the tournament and kid-friendly activities, as well as wine and beer sales at Weisiger Park.

Cornhole tournament members had to register in advance, and cash prizes will be awarded for first- and second-place winning teams.

Ramsey says they decided to expand the event because “We’d outgrown ourselves. You can only fit so many people downtown during a certain period of time. So we wanted to make it more family- and dog-friendly, and Weisgier provides a better space for kids to participate. The tournament and festivities at the park allows the opportunity to have fun if you don’t want to do the crawl — or if you want to do both.”

And downtown businesses will benefit, in addition to the participating restaurants, she says. “Bluegrass and Buttercream will be open in the early afternoon. They are also a sponsor of one of the cornhole boards,” Ramsey says. “The sponsorship this year has been amazing. Shoe Sensation actually sponsored our stage, which helps pay for the live music and DJ, which really helps get people downtown.”

The event is the biggest fundraiser for the shelter. The humane society is governed by a volunteer board working in cooperation with the Boyle County Fiscal Court to operate it. Last year at this time, the shelter’s annual intake of animals rounded out at about 3,000 animals over the year. This year, it’s closer to 2,500, Ramsey says. 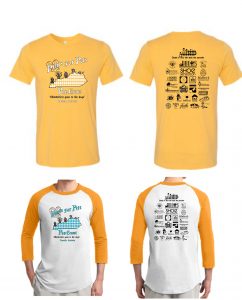 Two different T-shirt designs are available this year, which work as tickets to the Pup Crawl Saturday in downtown Danville.

She attributes that decrease to many things — the community cat program and Happy Paws Spay & Neuter Clinic’s work, to name a couple. The donations brought in from this event go to keep the entire place running and looking nice, in turn keeping animals healthy and happy, which leads to more adoptions.

The main sources of funds to keep the shelter open and operating is in the form of donations from individuals. The money brought in by the annual Pints for Pets event goes to the general operating fund.

“The humane society is responsible for all of the vetting of the pets — spay and neuter, deworming, vaccinations — and then we also upkeep the facility with those funds,” Ramsey says. “When the HVAC fails, if we have to put new fencing in; all the building and grounds costs are covered by the humane society. The county pays for the utilities.”

Volunteer Kristen Scherer created all of the graphics for this year’s T-shirts and was brain behind adding the cornhole tournament. Scherer designed all of the boards based on each sponsor, and the sponsors get to keep them after the tournament, Ramsey says.

“If they want to sponsor it again in upcoming years, they can keep it and we can reuse, not have to charge them to design a new one,” she says.

Handyman Jeff Cooper actually made his own boards to sponsor the event, she says.

Although the early registration for the Pup Crawl is over, Ramsey says there are plenty shirts leftover, which can be purchased at the sign-in tent at Weisiger beginning at 1 p.m., and specials will be given to those wearing them all day long.

Board members will be scattered about throughout the event, mostly at the park during the afternoon. “Spot,” DBCHS’s mascot, will make an appearance later in the day.

“His field of view is limited, so be aware of his clumsiness,” Ramsey jokes. Donation boxes will be available at participating restaurants where individuals can deposit passports they can get stamped at each location, in order for a chance to win door prizes, and there will also be a 50/50 raffle to enter.

IF YOU GO
The Pints for Pets Pup Crawl will be Saturday in downtown Danville. The registration tent at Weisiger Park will open at 1 p.m. to pick up reserved T-shirts or to purchase them. Live music, kid-friendly activities, a DJ and the cornhole tournament will be 1-5 p.m. at the park; the Pup Crawl at participating restaurants is offered 1 p.m. until close.