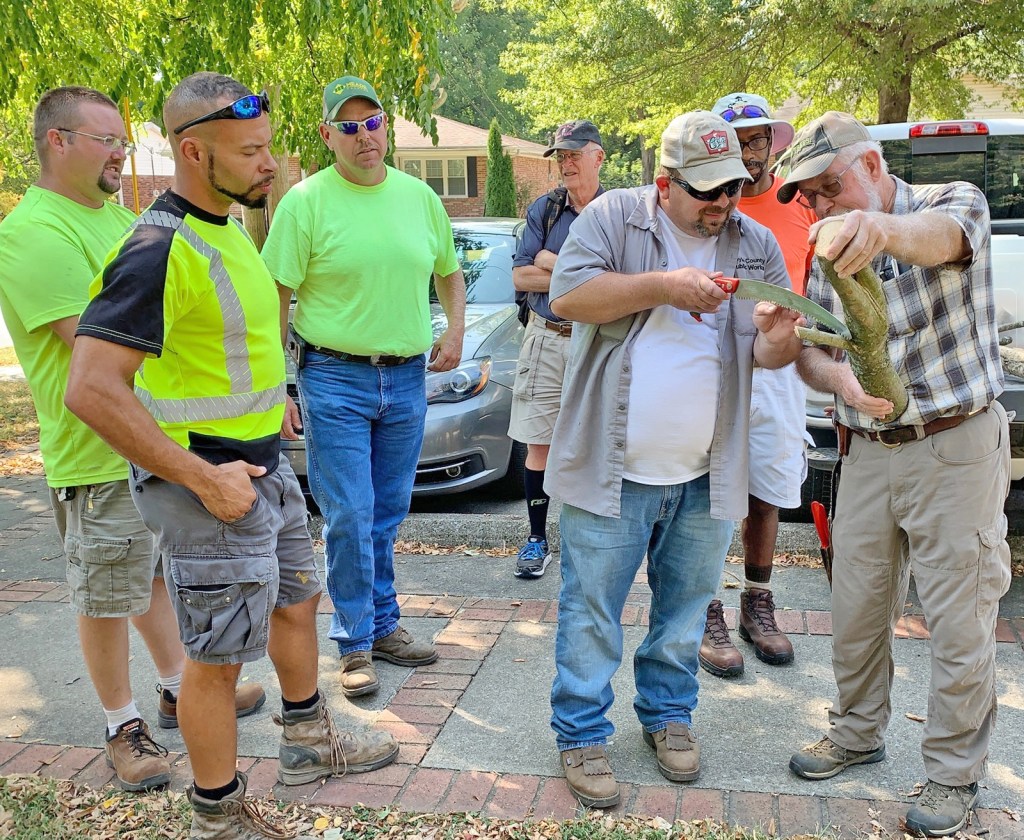 Dave Leonard loves trees and he knows more about them than anyone I’ve ever met. He also loves sharing what he’s learned in almost half a century of tree care with anyone who will listen. Which is why the Garden Club of Danville brought him to town to conduct a tree pruning workshop for city and county workers and home gardeners. 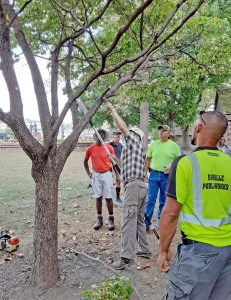 Using a pole trimmer and a hand saw, Leonard showed city and county public works employees how to prune a small tree by removing branches of a redbud that were overhanging the roof of the old jailhouse at Constitution Square. (Photo by Martha Caywood)

On a blistering hot day this master arborist, from Dave Leonard Tree Specialists in Lexington, led 25 participants around Constitution Square, discussing the condition of the trees and demonstrating proper pruning techniques. They had just spent the morning at the Boyle County Public Library attending a presentation about tree trimming and this was their chance to see Leonard in action, maybe even try a few cuts themselves.

In May, after learning that the club paid to plant the original trees in Constitution Square in 1944, the Garden Club hired Leonard to survey those trees. All the trees were tagged, keyed to a map, and notes made about their condition. At that time he noted that many of the trees needed pruning so he suggested the workshop. Danville and Boyle County Public Works officials jumped at the chance to send employees for a half-day of instruction.

Leonard emphasized that it is best to begin pruning regularly when the tree is young — before problems get complicated and expensive. “Everybody loves to go out and plant trees,” he said, “but nobody wants to spend the time and money to keep them pruned.” It is worth the effort when the result is a healthy and beautiful tree. Improper pruning can shorten the life of a tree by removing too much of the canopy, or allowing disease and insects to infect it.

At the park, Leonard asked everyone to feel the “branch collar,” the little raised ring of thicker bark at the base of the branch, where it takes off from a bigger branch or the tree trunk. Some trees have wider collars than others. It is important to leave that collar on the branch when you prune, so the cut will heal properly.

Using a pole trimmer (which looks like a mini-chain saw at the end of a long pole) Leonard pruned back the branches of a dogwood that were hanging over the shake shingle roof of the old jail house. The operation took less than five minutes and was safer done from the ground than from a ladder.

By the time he had pruned several trees and discussed the needs of others, participants were eagerly pointing out damaged limbs and questions were flying. Jae Paul Jones from Danville Public Works said, “We do a lot of tree work, but we’ve never looked at it this closely.”

County Engineer Duane Campbell was impressed by Leonard’s knowledge and experience and pleased with how much the Public Works employees had learned. “They truly enjoyed the four hours of class time as well as hands on time,” he said. “It was very apparent to me that they were attentive to what was being said and shown to them. Everyone was really enthusiastic about the workshop and definitely learned a great deal about proper pruning, as well as proper mulching and other maintenance needs of trees.” Campbell added that the workshop was “a great example of several groups working together to better our community.”

Even if you aren’t going to prune your own trees, Leonard said there are several things you can do to ensure they stay healthy and beautiful. First, choose the right tree for the site. Know your soil, sun exposure and climate conditions before you buy a tree, just because it looks pretty. Learn the mature size of the tree, too, so it has room to grow without becoming a nuisance. Choose a young tree with a good branch structure and have it pruned regularly while the branches are small. That way the wounds are small and heal quickly.

All trees will benefit from a layer of course bark mulch spread under the branches, ideally to the drip line. Leonard cautioned against piling mulch around the trunk. The mulch shouldn’t touch the bark. Roots may grow into the mulch and wrap around the trunk, which can choke the vessels in the bark that move water and nutrients up into the tree. Piling mulch against the trunk or allowing vines to climb the tree keeps the bark dark and damp, inviting insects and disease to attack.

When asked the best time of year to prune, Leonard quoted the old adage, “Prune when the saw is sharp,” but he did offer other suggestions. Try not to prune when the tree is actively leafing out, but do it in late winter or early spring before rapid growth starts. Wound healing is very energy intensive for the tree, so pruning shouldn’t be done when the tree is under stress. That includes during times of drought, which means we should wait until this hot dry spell is over. Like the trees, I will be very glad to see some rain soon.