Bus lines compete with trains in Danville in 1920s

Several bus companies sprang up in Danville in the 1920s and 30s and were very much in competition with the passenger trains, according to articles in The Advocate-Messenger archives.

Permits were issued in 1924 to three bus lines: Taylor Auto Livery Company had a line from Danville to Stanford and Junction City; Reo Bus Line from Lexington to Danville; and Bess Hatcher had a bus trip from Danville to Lancaster.

Griffin Kelly, state director of automobile bus lines, said under a new law placing auto bus transportation companies under the jurisdiction of the state highway commission, a penalty of 15 cents plus the regular permit fee could be assessed against companies which failed to obtain or apply for permits before the end of July.

The Advocate was informed in February 1925 the Lexington and Danville bus lines, including Reo and Red Star System, wanted to secure a room on Main Street to establish a modern omnibus depot where tickets could be bought and passengers could rest while waiting. The bus operated from the Taylor Auto Livery Company.

C. Luther Raines, a general omnibus representative in Danville, sold 125 tickets for Harrodsburg and the same number to Lexington in one week in February 1925. Raines represents the Red and Blue Bus lines.

Two-hundred and fifty people left Danville in one day for Harrodsburg and Lexington while many also stopped in Bryantsville, Wilmore and Nicholasville.

In late February 1929, petitions for the establishment of bus lines between Danville and Corbin and Lexington and Corbin, by the way of Crab Orchard and Mount Vernon, were heard by the state commissioner of motor transportation.

Denny Hendrickson of Liberty began operating in June of 1925 between Danville and Dunnville, via Shelby City, Moreland, Hustonville, Elixir, Middleburg and Liberty. He operated with the Taylor Auto Livery Co.

When a good road was made, the big bus lines planned to operate between Danville and Liberty every few hours. 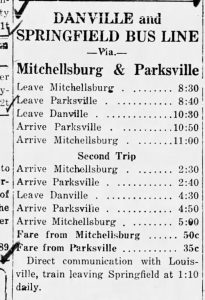 A schedule of the Danville and Springfield Bus Line was advertised on July 9, 1923, in The Advocate-Messenger.

A bus line between Danville and Louisville was granted a permit a month later by the Kentucky Highway Commission to operate the business.

H.O. Barnes won his fight against other bus lines to get the permit.

“The other companies made every possible effort to suppress Barnes, but he hired lawyers, secured evidence and whipped the whole bunch out.

“Nobody should be given an exclusive franchise to operate a bus on any pike which is owned by the public, this is a free country and all people should be treated alike,” according to an article.

“If 40 firms desire to operate omnibuses between Danville and Lexington, we say let them do it, but a tax should be imposed.

“No bus should be permitted to enter Danville without first paying the city for a license for at least a thousand dollars annually. The railroads build their town tracks, pay immense taxes on same and it is not fair to the railroads if the buses do not pay.”

There were lots of complaints in Danville about busses speeding through Main Street. One bus almost ran over a newspaper man on West Main Street.

The CCC Lines moved their bus station from the Gilcher Hotel to 316 West Walnut St. in an office at Danville Brick Company in May 1927. Rufus Lipps was in charge with J.M. Carpenter as agent. The telephone number was 48.

The buses were to be routed from Walnut Street to Maple Avenue to Stanford Road.

Passengers had to go to the bus station to board busses. The schedule remained the same with the exception of the last bus from Lexington to Danville was due at 7:40 p.m.

The battle between the railroads and bus lines continued merrily in 1931, according to an editorial.

“New bus lines are planned almost daily, and the ones already operating are putting on more lines, and bigger machines.

“The railroads have been dropping off trains wherever the public service commissioners have permitted it.

“The contest is very unequal as things stand now. The railroads have vast amount of money tied up in right-of-way and road bed and rolling stock; they are compelled to maintain repair crews; they are taxed on their right-of-way and stock; and they are handicapped by laws which require the use of a minimum number of men regardless of the character of the train.

“The bus lines pay nothing for the right-of-way. That is furnished by the people. They are not required to carry more than one in a crew, for the driver collects fares and the passengers fees on and off without assistance. They pay practically nothing to towns through which they pass. They are permitted to cut fares to a point just below the rates fixed by the Interstate Commerce Commission for the railroads.

“Railroads pay a privilege tax to every incorporated town through which they pass, they pay special school taxes, but bus lines do not.

“Competition is an unequal one, and in the opinion of all fair minded people, it should be made more equal.

“First, the bus lines should be taxed exactly the same way that railroads are taxed, so the state and county and school funds in the territory which they pass may benefit.

“Second, railroads desiring to put on light trains or gas or gas electric cars to accommodate the travel should be preference.

“The highways are designed primarily to accommodate private vehicles, and they are being hogged by large busses and trucks that treat private cars and other vehicles as though the latter was one the road merely through tolerance.

“They force cars off the road. In the public interest, if it is to be allowed to parallel and compete with the railroad, it should be put upon equal basis of taxation.”

Fair goers get a break

Patrons of the 1929 Blue Grass Fair were offered reduced transportation from all points of central Kentucky by the railroads and bus lines.

Arrangements were completed with the railroads for their announcement that charged fair patrons within Central Kentucky at a rate of one and one-half fares for the round trip except on Wednesday.

Bus companies planned to sell round trip tickets at a 15 percent reduction to fair patrons.

By 1939, Greyhound Bus Company was coming through Danville. A new station was built on West Main Street near the Henson Hotel.

R.M. Arnold owned the lot. The new facility had a waiting room, and facilities as well as a storeroom.

Five other bus companies serving Danville were still operating at that time.