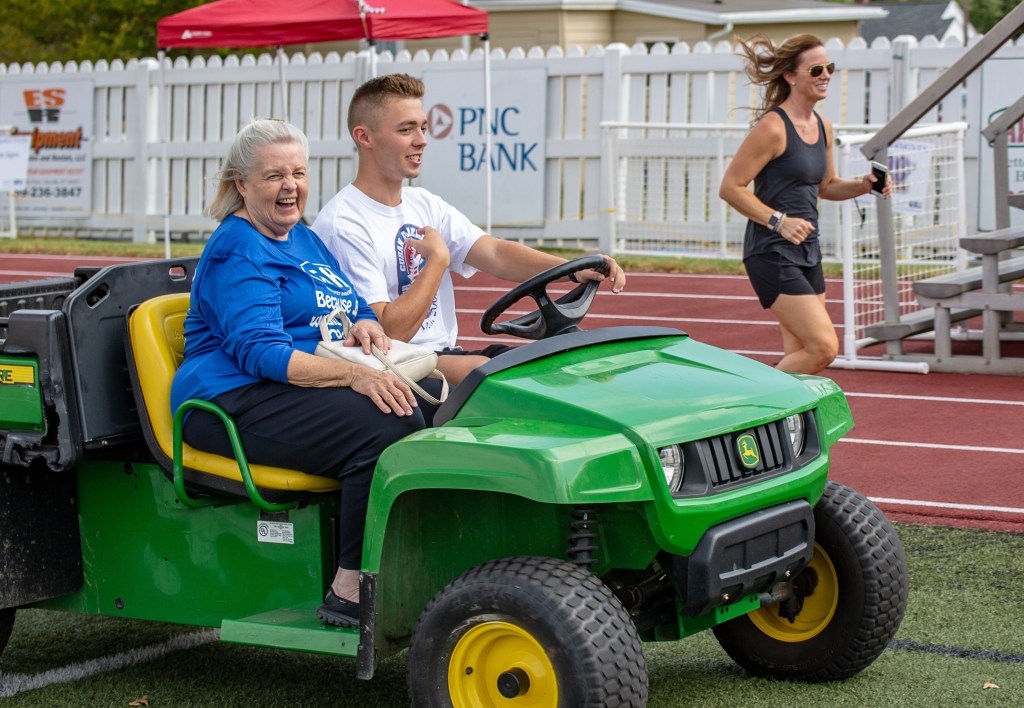 Florann Strevels, left, gets a ride around the track from volunteer Evan Thompson, as her daughter-in-law Emily Strevels runs alongside. (Photo by Ben Kleppinger)

The Heart of Kentucky United Way held its “.5K Marathon” Friday — a joke race that consisted of one lap around the track at Centre College’s football field.

The race is a fundraiser for the United Way, a non-profit that funds many other local non-profit entities working on education, child welfare and more. Booths along the track allowed participants to stop and get cupcakes, cookies, bananas, water and apples; for an extra price, you could get a ride around the track instead of running or walking.

The cost was $25 per person to participate, but it was $35 on the day of the event for “procrastinators.” Participants received a T-shirt and a “gold medal” declaring they had won “first place.” The event was open for six hours and participants could show up at any time.

Ephraim McDowell Health CEO Dan McKay and Farmers National Bank President Marty Gibson opened the festivities at noon by driving around the track, waving a United Way flag. Then, members of Danville’s police and fire departments competed against each other in a four-member relay race on tricycles. The police department team won and was given gift certificates as a reward.

Stephanie Blevins with the United Way said she expects to know how much was raised through the event on Monday.

Jill Thompson, left, and Cassy Elmore ride around the track on tricycles.

Kathy Phillips, left, and Georgia de Araujo with the Boyle County Public Library were two of the first people to “run” the “marathon” Saturday. Phillips brought along her dog, Chloe. (Photo by Ben Kleppinger)