Danville comes up short on homecoming 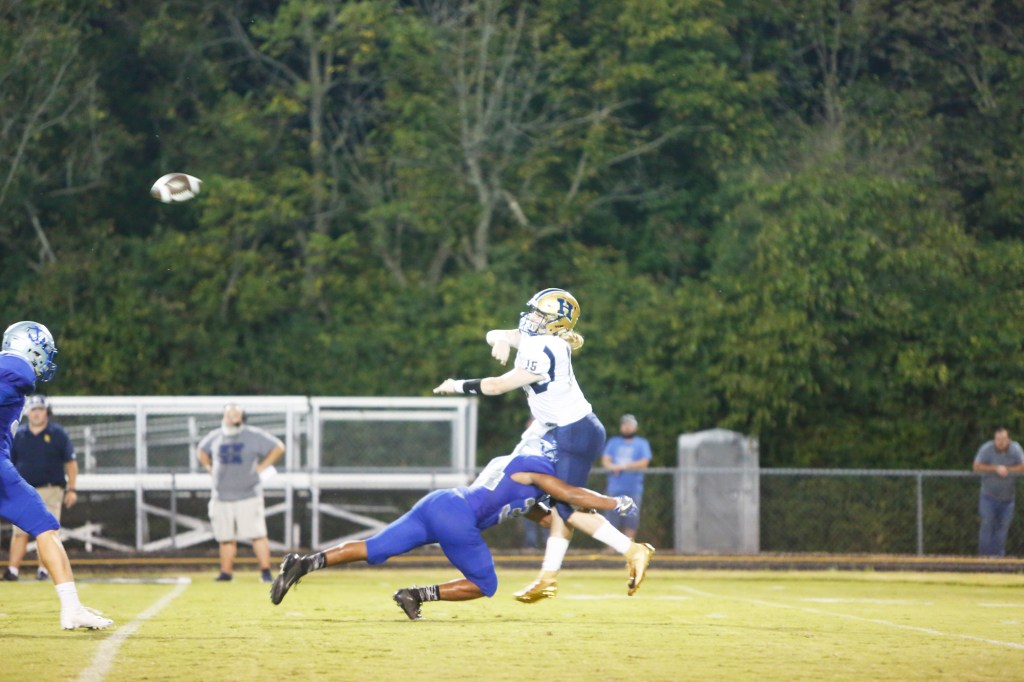 The teaching and learning continues at Danville, day by day and game by game. On Friday night, however, the young Admirals learned their toughest lesson to date.

They learned that on some nights, playing hard and battling back simply aren’t enough.

Danville came from behind twice against Hazard and for a brief moment appeared to have secured a victory on a turnover in the last two minutes, Instead, the Admirals suffered their fourth straight defeat when Andrew Ford recovered a fumble in the end zone with 14 seconds remaining for the touchdown that gave the Bulldogs a 30-29 win at Admiral Stadium.

Ford’s score came three plays after a Danville interception was erased by a pass interference penalty, and it sent the Admirals from the brink of victory to the depths of disappointment.

“We competed, they fought, and it just is what it is,” Danville coach Clay Clevenger said. “Sometimes that stuff just doesn’t go your way, and it didn’t go your way tonight.”

Penalties played a key role in this game, none more than two calls in the final six minutes that went against Danville.

First, the Admirals were penalized for an illegal block on a two-point conversion attempt that would have given them a 31-24 lead after Keelan Story scored on a 6-yard run with 5:47 remaining. 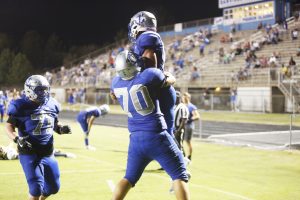 Danville offensive lineman Hagen Burns (70) gives running back Keelan Story a lift as lineman Alex Gutierrez-Jacobs (71) joins the celebration after Story scored on a 6-yard run during the fourth quarter of the Admirals’ 30-29 loss to Hazard on Friday. (Photo Mike Marsee)

That call was trumped by a pass interference flag that was thrown as Danville’s Bryce Johnson intercepted a pass inside the 10-yard line that would have given the Admirals the ball with 1:32 to play.

Clevenger came out onto the field to protest that call, and he protested again moments later after Hazard’s Reece Fletcher fumbled at the 2-yard line and Ford recovered the ball in the end zone – a play that isn’t legal in the NFL but is in high school and college football.

Following Ford’s score, Danville had precious little time to try to advance the ball into field goal range, and an interception by Hazard’s Ryan Davidson with five seconds left sealed the Admirals’ fate and finished a lesson that Clevenger surely wishes they didn’t have to learn.

“Things don’t always go your way,” Clevenger said. “I felt like we played well enough to win tonight, there’s a couple of breaks that we didn’t get, and we’ve just got to line up and try to get it done next time.”

Story’s touchdown run that gave Danville a 29-24 lead followed four straight completions for 51 yards by quarterback Sage Dawson. Story led the Admirals in rushing with 60 yards on six carries – all in the second half – while Dawson completed 11 of 27 passes for 78 yards with two interceptions.

Corydon Crawford’s 16-yard touchdown run on the opening series gave Danville the early lead, but the Admirals fell behind 14-7 in the second quarter and trailed 17-13 at halftime.

Darrian Bell put them back on top on the third play of the second half when he returned an interception 61 yards to the end zone. Sam Walls added a 27-yard field goal late in the third period to make it 23-17.

Hazard responded with a scoring drive that consisted of eight running plays, taking a 24-23 lead on a 3-yard run by Fletcher with 8:32 to play.

The Bulldogs outgained the Admirals 365 yards to 211. They ran for 263 yards, with Trajon Campbell getting 183 yards on 24 carries and Fletcher adding 98 yards on 19 carries.

Crawford had three rushing attempts for 44 yards and caught four passes for 18 yards for Danville, and Caleb Burns rushed for 31 yards and a touchdown on 10 attempts.

Clevenger said the Admirals will try to build on the things they did well in this game as they prepare for a game at Wayne County next Friday.

“You’ve just got to learn from it and keep moving forward,” he said. “We’re down some bodies, and we were down some (more) bodies during the game when some guys had some cramping issues. The guys on the field were stepping up and playing hard, and when they keep competing through some of that adversity, we can build on that.”