New DHS principal wants to be there for students

Danville High School has started the new year off great! One new and important person to the administration is DHS’s new principal, Thad Elmore.

Elmore has been in administration for seven years and has been in many different counties in Kentucky. Elmore has taught in Washington, Marion and Elizabethtown. In total he has been in the education program for 22 years.

So far, Elmore has enjoyed all grade levels and is happy with the amount of effort each student puts into his or her education. 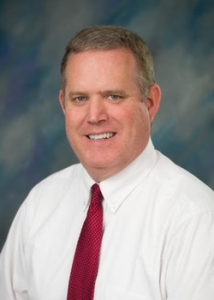 Getting to know him

Upon first glance he may look like a really strict. Don’t be scared to approach him — Elmore is nice, open-minded and a very social person. During his high school years, he played football and baseball. He was also a band member for a year and played the saxophone.

Elmore will be 50 soon, and he has six kids: Carter, Mary Catherine, Clayton, Kaylee, Luke and Hudson. He loves the companionship of his wife Holly, who is a principal at Washington County Elementary.

Elmore will also receive his first grandchild in November and is really excited to meet him. In his free time, he likes to travel. Elmore has been to Japan, China, Mexico, Canada and Spain.

“I love to cook and I enjoy sharing with my family when I have the time,” he said.

The truth behind being a principal

Elmore enjoys being a principal and stated, “My passion is just for students . . . when I speak to students, that’s the part I enjoy the most.” Elmore wants to see his students succeed in the future and continues to say that “I want to see students be successful in college or in a career when they graduate.”

Being a principal means helping students find their way through the real world. Elmore also states the negatives of being a principal. This includes the emotional state of students or accidents that can happen throughout the year. Elmore says, “It has its days. There are downsides when something negative happens; you have to take everything into account when you have to deal with situations.”

Before coming to DHS, Elmore says that “the worst time I have gone through was when seven students were killed in a car accident. It was a tough time.” When things like this happen, it is hard for everyone and he wants to make sure everyone is emotionally well. Elmore will be there for his students.

As you may know, DHS  is a school full of diversity and it is important to include everyone. Elmore wants to make sure that everyone at DHS has a part in activities and if you want to ask him anything, please let him know. He wants all students to know that he is open and ready for any request any student has. You can contact him at via e-mail: thad.elmore@stu.danville.kyschools.us.

Juliana Tecpile is a senior journalism student at Danville High School. Juliana has been in the Danville school district for six years.