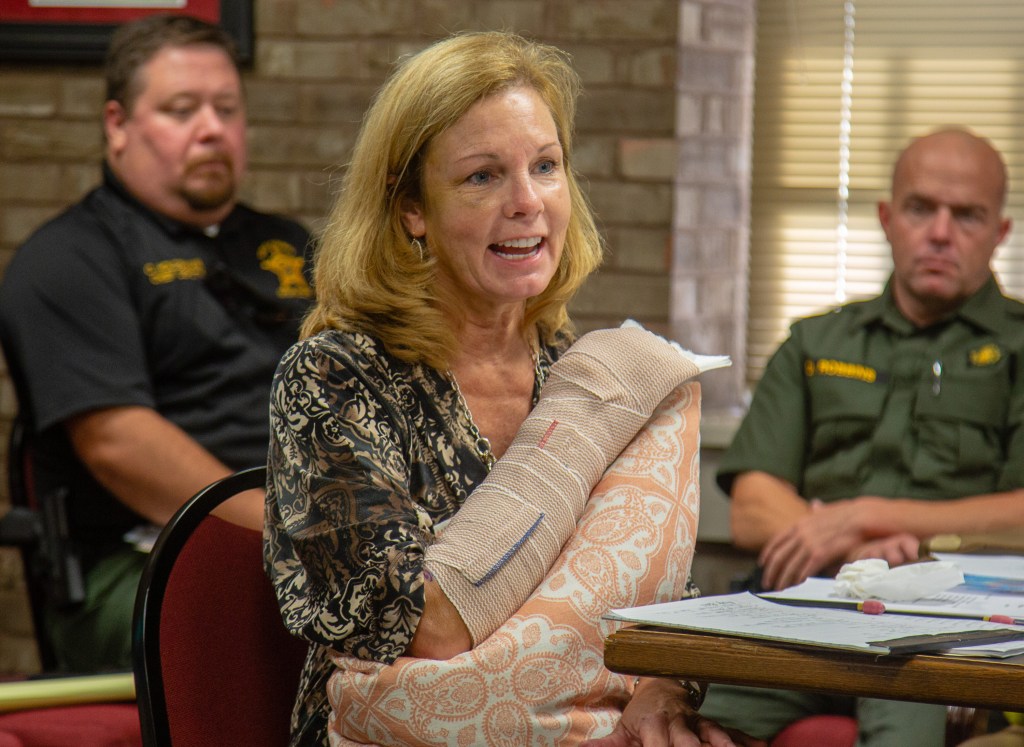 Boyle County Treasurer Mary Conley offers a thank-you during Tuesday's fiscal court meeting to county staff who stepped up to help her after a serious vehicle wreck earlier in the month. (Photo by Ben Kleppinger)

Boyle County Treasurer Mary Conley considers herself and her husband “very fortunate” after they survived a serious wreck in Jessamine County. And she’s extremely grateful to Boyle County officials and staff for their help and support during her recovery.

The wreck happened on U.S. 27 in Jessamine County Sept. 13; Conley said her husband, Chris, was driving when another vehicle cut into their path.

They thought they had avoided a collision by heading for the median, but the vehicle still hit them and caused their SUV to roll three and a half times, coming to rest on its roof.

All four fingers on Conley’s right hand were severely injured in the wreck.

“They were able to save two,” she said. “We’re hoping I can keep two of my fingers.”

She said her husband’s right hand was also severely injured. The couple braced themselves during the wreck by reaching through the open sunroof on their vehicle, which likely led to the injuries, she said.

The wreck occurred on a Friday; despite the severity of her injuries, which required surgery, Conley still came into work at the Boyle County Courthouse for a couple hours the following Monday.

Conley said she feared because her job involves so much typing and using her hands, losing her fingers “may end my career.” But Judge-Executive Howard Hunt told her, “Don’t make any rash decisions.”

Conley said she’s been working a lot from home and coming into the office some as well. She’s very thankful for everyone in the Boyle County Fiscal Court office who has helped cover her substantial workload.

“It’s just been overwhelming the amount of people who care for us,” she said.

Conley made a statement about her gratefulness during Tuesday’s fiscal court meeting.

“When you talk about community and serving your community, the magistrates that we have here in front of us do an amazing job, and I am honored to be associated to each one of you. I am humbled by your concern and your phone calls and your caring,” she said. “This is goodness at its best. I want to thank you all first and foremost. Secondly, I’d like to also thank the staff … I want to publicly thank the staff that you all have working for you who have supported me, who have supported our community, who have supported you and who have never in any way said anything that would lead me to think that it was a burden on them. … And that’s all I’d like to say.”

Conley was given a warm round of applause, as well as hugs and positive comments from multiple people following the meeting.

Judge-Executive Hunt said Conley and the rest of the county staff have done an excellent job keeping county business rolling as smoothly as possible since the wreck.

“We’re doing fine. She comes in and she’s got a great signature — even left-handed it’s been perfected,” Hunt said. “I’m thankful that she and her husband, Chris, were not injured any worse than they have been. They still have a road to recovery ahead of them. But she is a very determined person who loves her job and we’re fortunate to have somebody like that.”