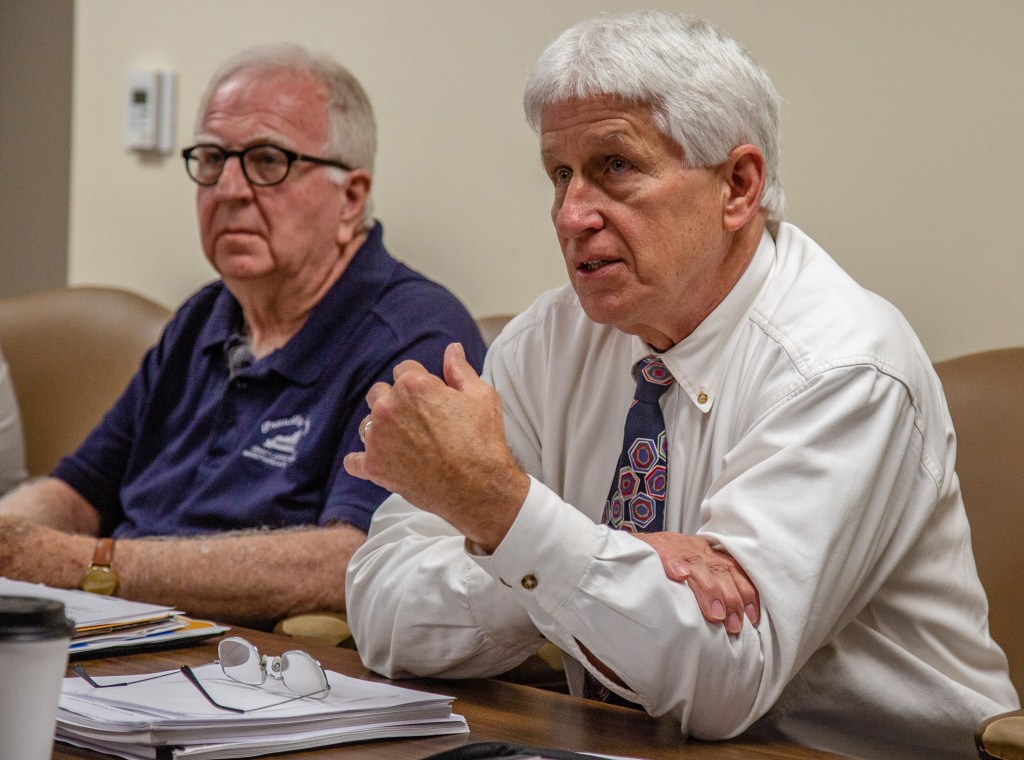 Boyle County Magistrate Tom Ellis said Tuesday he would support exempting the Boyle County Detention Center from any future county-wide smoking ban so the jail could continue to let inmates use e-cigarettes. (Photo by Ben Kleppinger)

If Boyle County does opt to pass a county-wide smoking ban, some officials want to make sure an exception is carved out — for the Boyle County Detention Center.

Jailer Brian Wofford said state Department of Corrections regulations prohibit all tobacco products in jails, but e-cigarettes are allowed, and they’ve proven “very useful” in a number of ways.

The use of e-cigarettes allow inmates to manage their addictions to nicotine, which helps prevent fights from breaking out. It also reduces attempts to smuggle tobacco products into the jail. Less contraband also means fewer health problems and disease — because people often attempt to smuggle contraband items into the jail through body cavities, Wofford explained.

“I look at this as kind of medically assisted treatment because most of folks coming in have substance abuse issues,” Wofford said. “This gives them a little relief while they’re going through withdrawals and everything.”

And inmates pay for their e-cigarettes in the jail’s canteen, Wofford added. Part of what they pay goes into the canteen fund, which is used to pay for things that benefit inmates, such as the jail’s new re-entry program director, James Hunn.

Wofford said the sale of e-cigarettes in Kentucky jails has brought in more than $33 million for canteen funds.

Boyle County Magistrate Tom Ellis said Tuesday he supports carving out an exception for the jail in any ban on the use of tobacco and e-cigarette products the county might pass.

“If you’ll look inside your mind and think of folks coming into the jail, whatever their addiction is, and at the very least it is cigarettes — those are banned in the jail. So many of them as a substitute are using e-cigarettes,” Ellis said. “Just imagine if you have smokers in your family — (going) cold turkey that day, what the consequences could be in a jail with folks left, right, front, back, and perhaps you’re one of those sleeping in a cot on the floor.

“With that in mind, if we move forward with a smoking ban, we will look to our county attorney, in writing, to exclude the jail.”

The jail sits inside Danville’s city limits, a city that already has a smoking ban in place. Wofford said the jail has never gotten in trouble with the city for inmates’ e-cigarette use and he “assumes” the city exempted the jail in its ban.

Wofford said allowing inmates access to e-cigarettes is only one piece of many when it comes to helping inmates. The jail also hopes to start offering smoking cessation classes from the Boyle County Health Department for inmates. And Wofford aims to offer other products to address nicotine addiction as those products are approved for use. There will be signs posted in the jail informing inmates that using e-cigarettes can be harmful for their health, he noted.

A renewed public push for a county-wide smoking ban began earlier this year. Boyle County Health Department Director Brent Blevins told magistrates in June he would like to see the county government make plans for a smoke-free ordinance that would cover the entire county.

Currently, Danville and Perryville both have smoke-free ordinances on their books; Junction City does not and officials there have said they are against a county-wide smoking ban. Danville has been smoke-free for more than 10 years; Perryville just voted this year to prohibit the use of tobacco and e-cigarette products in public spaces and businesses.

Boyle County Magistrate Jason Cullen has been one of the most vocal supporters of a ban. At Tuesday’s meeting, Cullen continued the push, distributing an Advocate-Messenger editorial that favored a county-wide ban to other magistrates.

Magistrate John Caywood also spoke in favor of a ban, explaining it would benefit the quality of life in the community.

“If we really do care about this community, then we really need to look at a smoking ban. Because we’re talking about people’s lives — not just people that are smoking but people that are near them,” Cullen said during time for “new business” toward the end of the meeting. “So I will keep bringing this up until it becomes old business.”