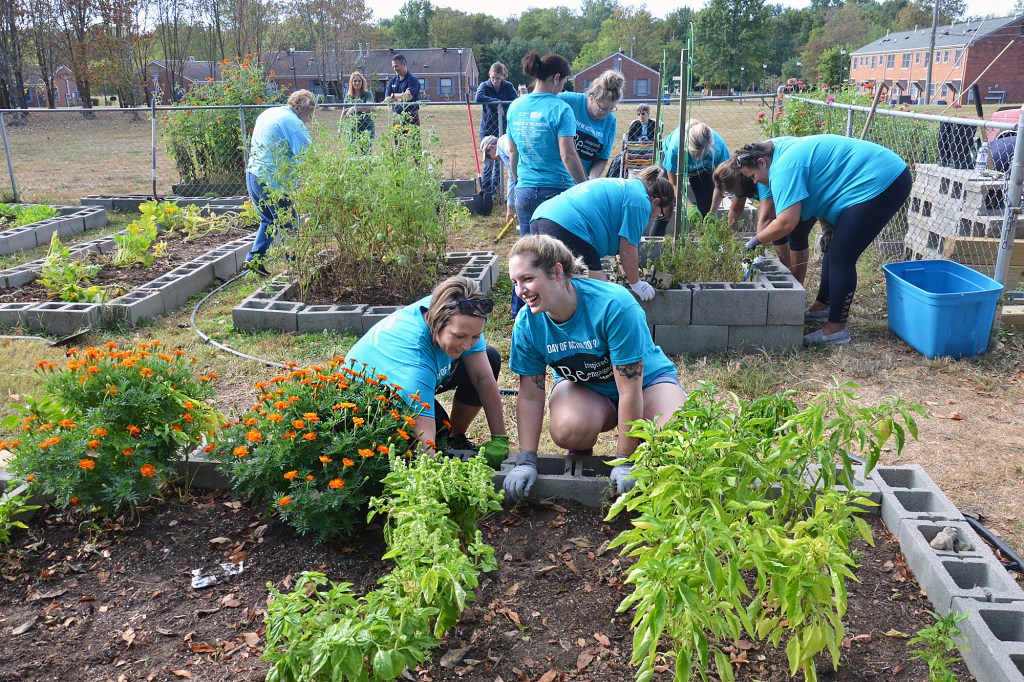 Jessica Coffman and Stephanie Robinson share a laugh while weeding a flower and herb bed behind the community center at Batewood Homes on Wednesday during the Heart of Kentucky United Way Day of Action. (Photo by Robin Hart)

More than 40 work sites throughout four counties benefited from volunteers for the Heart of Kentucky United Way’s Day of Action on Wednesday.

Even though 325 people in Boyle, Garrard, Lincoln and Mercer counties officially pre-registered to work, nearly 400 showed up and helped with projects for 43 non-profit organizations, Blevins said.

For example, a group from American Greetings converged on the garden planted by KyADAPT, located behind the community center at Batewood Homes. They weeded, replanted a few herbs and shoveled dirt from a walkway that was going to be poured with concrete around a raised garden bed.

Other volunteers met at Wilderness Trace Child Development Center and did everything from washing windows, to assembling child wagons and hanging wall displays for the students’ artwork to be showcased on.

Many other volunteers gave a “facelift” to the different rooms at Bluebird Market, Blevins said.

Some projects were “super fun,” she said, like the chair volleyball games volunteers held at The Gathering Place Senior Citizens Center.

In addition to the projects at the non-profit organizations, two senior citizens had brand new ramps built at their homes by volunteers, she added.

Everyone who worked received a T-shirt with the logo, “Be inspired. Be engaged. Be United.” Blevins said, “That what this was all about.”

Monica Dean hands a decorative container to Glenda Jeffries as Kevin Foster reachers for more items from the top shelf at Bluebird Market on Wednesday. The three volunteers were just part of a larger group who were reorganizing the market as part of the Day of Caring. Bluebird Market sells donated used items for the benefit of Wilderness Trace Child Development Center. (Photo by Robin Hart)

Clay Albright attaches a red flag on the mailbox at Wilderness Trace Child Development Center, which was one of several tasks that volunteers helped with on Wednesday. (Photo by Robin Hart)

Katelin Hatter sniffs a handful of mint that Jessica Coffman had just pulled from the garden behind the community center at Batewood Homes. (Photo by Robin Hart)

Brad Jeffies, right, and Ryan Doane shovel dirt into a container. They were leveling a walkway where concrete was going to be poured around a raised garden bed as part of their project with the Heart of kentucky United Way Day of Action on Wednesday. (Photo by Robin Hart)