Deputy jailer commended for helping child who lost his mother 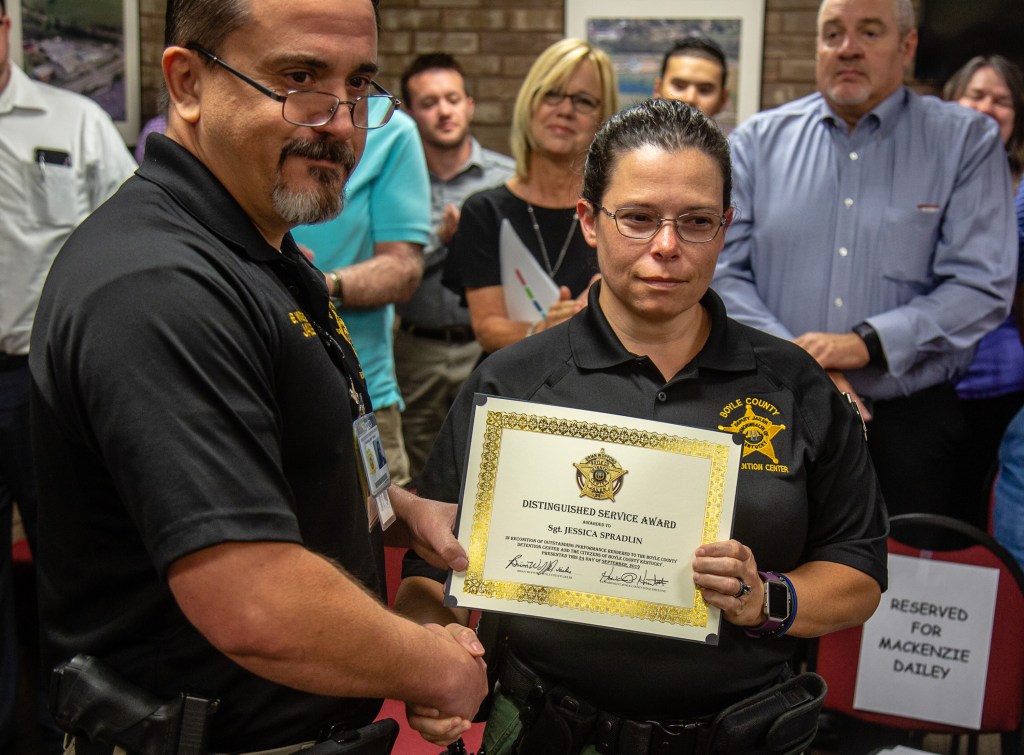 A few weeks ago, Sgt. Jessica Spradlin was on her way home from her night-shift job at the Boyle County Detention Center. She had driven through Harrodsburg to pick up some medicine for her mother.

“I never go that way to go home,” she said. One small boy was fortunate she had.

Spradlin came upon the scene of a bad wreck involving a truck and a passenger vehicle that held a mother and her young son.

“I guess it had just happened,” Spradlin said — she was the first vehicle to arrive at the scene.

Spradlin’s first instinct was to help the driver of the vehicle, but she quickly “realized I couldn’t get to the mom to see if I could save her” — the mother had died in the wreck.

“Once I determined there was unfortunately no way I could (help the mother), I went up there to the child,” who had been removed from the vehicle and led away from the scene by someone who had been in the other vehicle, Spradlin said. “I created a bond with him to make sure — see how he was doing — make sure he stayed calm. Because with trauma like that, that’s the most important thing.

“Once that bond was created, he didn’t feel comfortable with me leaving — nor did I. I assured him that I would stay with him.”

Spradlin rode in the ambulance with the boy and stayed with him at the hospital.

“I didn’t leave his side because I promised him I wouldn’t,” she said. “… I didn’t leave until the child told me that he felt OK for me to.”

Spradlin’s acts of selflessness to help the boy did not go unnoticed — a local licensed clinical social worker called in to help saw how she was there for the boy in a time of great need.

“As I reflect back on that day, I continue to be moved,” said Chris Whitsell, LCSW.

“When those five principles are available, the prognosis for recovery of an individual are much greater,” Whitsell said. “… I was very inspired to see her demonstrate these key principles … during a time of tremendous distress for a young person with so much life ahead.”

Whitsell has a lengthy career in social work and said Spradlin’s acts stand out as rare and exemplary.

“I felt like she demonstrated extreme courage, very trauma-aware instincts and was emotionally and physically available for this young person in a time of extreme distress in a fashion that I have not personally seen often in my 30 years of doing this work that spans nearly half the state.”

“What this young lady did will make a difference in this child’s life for the rest of his life,” Judge-Executive Howard Hunt said. “And that is truly noteworthy.”

Wofford said Spradlin does a great job when she’s on the clock at the jail and “did an amazing job” after she was clocked out, as well.

Spradlin said she isn’t formally trained in trauma-informed care. But there are multiple factors from her life experience that informed how she responded to the child’s needs: her lengthy career in corrections, along with all the different trainings that come with it; caring for her two handicapped grandparents; “and just me being a mom myself and the type of mom I am.”

“I didn’t do anything I wouldn’t expect someone else to do for my child if the role was reversed. I wouldn’t want someone else to leave my kid, so I didn’t leave that kid,” she said. “… I’m not the one that needs to be thanked for that day. It’s my mom and my grandparents — for the woman that I am and the mom that I am. And Lt. Baker at the jail, always pushing me to be the best officer I could be every day. It all just kicks in when it needs to.”

Spradlin said she has reached out to the grandmother of the child in the weeks since the wreck, and learned that he is “doing really well, considering everything.”

“She would like to set up a time for me to see him — if and when he’s ready — so I can see for myself that he is OK,” she said.

“I’m very sorry I couldn’t save that child’s mommy. I knew I couldn’t save her, so I stayed with the child to make sure we could save him,” she said. “… I do my job the best I can. And that’s all I did was my job. I didn’t do it for this praise — that’s for sure.”