People with disabilities have a right to vote 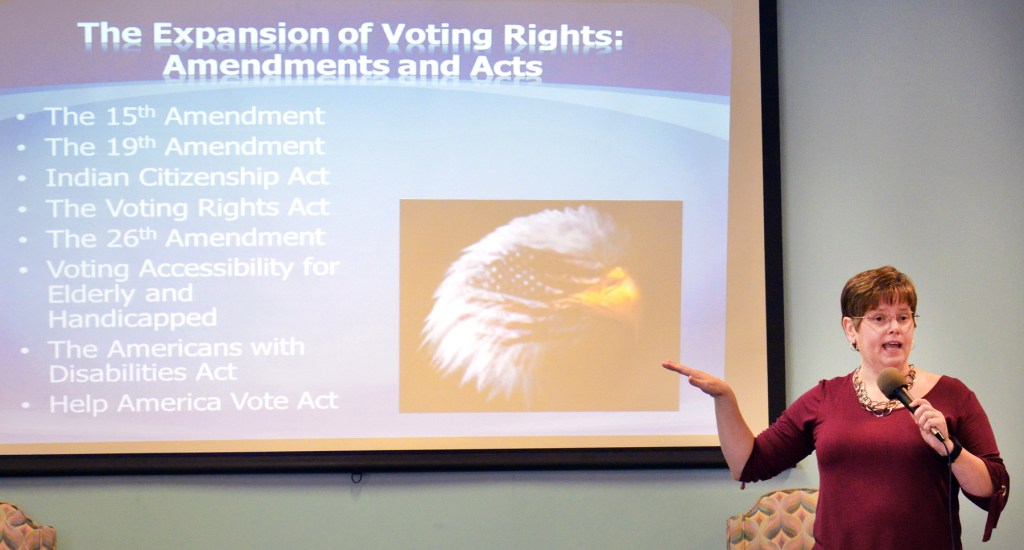 Disability rights advocate Beth Metzgar shows a slide of the expansion of voting rights in the U.S. (Photo by Robin Hart)

Representatives from the Kentucky Department for Protection and Advocacy provided information in observance of National Voter Registration Day on Tuesday. The department shared information on how people with physical or mental disabilities can participate in the voting process, and even gain the right to vote if they have been denied that right. The program was open to the public and was hosted by A Brighter Choice at First Christian Church.

Disability rights advocates Beth Metzgar and Casey Philpot spoke to the small group about the history of voting rights in the United States. They also provided information on current voting rights by explaining different voting scenarios.

After telling a story about a young woman with Down Syndrome who had to stand up for herself in order to vote, Metzgar said, “There is so much power in just one person. People with disabilities matter.”

Boyle County Clerk Trille Bottom, whose office oversees all voting in the county, also attended the program. “This is part of our job,” she said. She also complimented Metzgar and Philpot for taking the time to explain voting rights in a simplified manner to those who want to vote.

Boyle County Clerk Trille Bottom holds up a small sign indicating what she thought the correct answer was during a presentation by representatives of the Kentucky Department for Protection and Advocacy on Tuesday. (Photo by Robin Hart)

James Terrell, center, holds up a sign indicating his answer to a question about voting rights on Tuesday, which was also National Voter Registration Day. (Photo by Robin Hart)

Disability rights advocate Beth Metzgar shows a slide of how literacy tests were once used to discriminate potential voters. (Photo by Robin Hart)